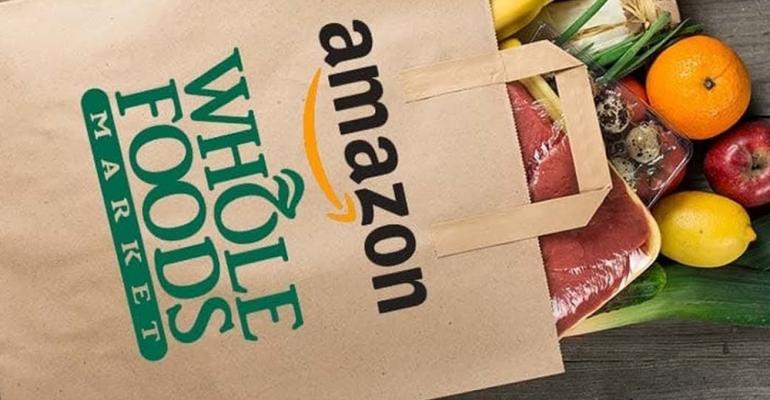 Point-of-sale savings to become available chainwide by this summer

The much-anticipated linkup between Amazon Prime and Whole Foods Market stores has arrived.

Amazon and Whole Foods on Wednesday said that members of the e-tailer’s Prime benefits program can now get an extra 10% off sale items and weekly “deep discounts” on certain top-selling items at Whole Foods stores in Florida. Plans call for the benefits to roll out to all of the nearly 400 Whole Foods and Whole Foods Market 365 stores nationwide this summer. “We’re thrilled for Whole Foods Market to be part of the Prime experience. By offering greater discounts on sale items, and exclusive deals like $10 off a pound for sustainably sourced, wild-caught halibut, launching savings for Prime members is an amazing opportunity to bring our industry-leading quality standards and delicious food to more customers at a better price,” John Mackey, co-founder and chief executive officer of Whole Foods, said in a statement.

Deals for Prime members will be “prominently featured” in stores, and customers can find out about weekly offers via the Whole Foods app, the companies said. Prime members receive the savings and exclusive deals by scanning the Prime Code in the app at checkout. They also can opt in to use their phone number at checkout to get the savings.

Whole Foods said that it typically has hundreds of sale items in stores that will be eligible for the additional 10% off with Prime membership. New and exclusive deals will rotate weekly.

The following offers for Prime members are available in Florida stores through May 22: sustainably sourced, wild-caught halibut steaks at $9.99 per pound, a savings of $10 per pound; organic strawberries at $2.99 for 1 pound, a $2 savings; cold brew coffee at Allegro coffee bars at 50% off for 16 oz.; KIND granola at $6 for two 11-oz. bags; buy one, get one free for a 12-pack case of 365 Everyday Value sparkling water; and Magic Mushroom Powder at 50% off.

“This new Prime benefit at Whole Foods Market is a perfect pairing of healthy and delicious food at even more affordable prices,” said Cem Sibay, Amazon Prime vice president. “Our vision is that every day Prime makes your life better, easier and more fun, and shopping at Whole Foods Market with exclusive deals and savings is all of this and more.”

Supermarket operators have been bracing for an integration of the hugely successful Prime program at the point of sale in Whole Foods stores since last August, when Amazon acquired the Austin-based specialty grocer in a $13.7 billion deal that shook up the retail grocery industry.

Both companies had quietly tinkered with existing savings, rewards, benefits and other programs leading up to the integration. For example, in mid-April, messages on the Whole Foods website indicated that various shopper rewards and benefits would end May 2, including the retailer’s pilot rewards program and digital coupons. An email to Whole Foods rewards members also said to “stay tuned for additional announcements for Amazon Prime members.”

Around the same time, Amazon founder and CEO Jeff Bezos said in a letter to shareholders that the companies had begun the technical work “to recognize Prime members at the point of sale and look forward to offering more Prime benefits to Whole Foods shoppers once that work is completed.” In the letter, Bezos also disclosed for the first time the total number of Prime members: more than 100 million worldwide.

In addition, the companies have introduced a 5%-back benefit for Prime members on Whole Foods purchases using the Amazon Prime Rewards Visa Card. And since the acquisition, there have been several rounds of price cuts for all Whole Foods customers on hundreds of grocery staples and fresh foods.

As of May 11, Amazon began charging $119 for an annual Prime membership, up from $99 previously, citing the high costs of the program. Customers renewing their memberships will pay the increased price starting June 16.

Still, industry observers don’t expect the price hike to have much of an impact on Prime’s growth. When Amazon chief financial officer Brian Olsavsky announced the increase during the company’s first-quarter earnings call, he also reported that subscription services revenue — which includes Prime — jumped 60% to $3.1 billion. Online store sales climbed 13% to $26.94 billion, while sales at physical stores, including Whole Foods, totaled $4.26 billion (no year-over-year change was available).