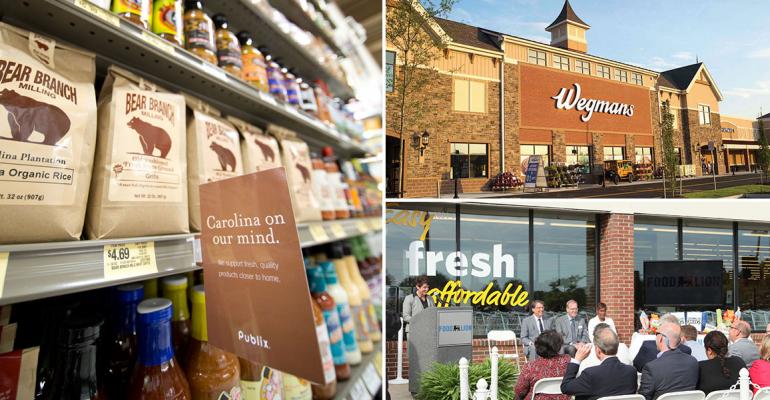 Fast-growing incomes and a fast-growing population are attracting the best efforts of some of the country’s best food retailers in and around North Carolina’s Research Triangle — a playing field observers say will soon be the most competitive in the U.S. — if it’s not already.

News that Wegmans Food Markets was close to signing a lease for what would be its first store in North Carolina at a site in Cary is only adding to a frenzy of recent expansion in the area that’s already drawn some of the country’s best-regarded supermarkets. Publix Super Markets opened in Cary for the first time just over a year ago, and has several more stores planned in the area. Lidl, the German discounter with ambitious plans for growth by 2018, has at least two stores in the Raleigh-Cary MSA on its radar, according to reports. Sprouts Farmers Market reportedly has signed to anchor a new center in Raleigh expected to break ground this year.

They are joining a battle between existing players like Kroger (operating under the Kroger and Harris Teeter banners there), Food Lion and Lowe’s Foods — all of which have invested in their stores over the last year — and a lineup of natural and specialty players including Earth Fare, Whole Foods, Trader Joe’s and The Fresh Market; warehouse clubs BJ’s and Costco; and discounters like Aldi. Then there’s the area’s largest grocer, a shaken but still mighty Walmart.

“We are at ground zero,” remarked Tim Morrison, an architect with the North Carolina-based supermarket design firm Little on the competitive influx in the Triangle.

That retailers see opportunity in the area is easy to explain: The demographics are great and the population is exploding. Even the most aspiring retailers are struggling to keep up with the growth, but those who do are finding not just new sales, but profitable ones, observers said.

“Retail tends to follow where there’s residential growth, residential growth tends to follow where there’s jobs, and when they’re good jobs, the higher disposable income allows people to buy products with higher margins,” John Crossman, owner of Orlando-based real estate firm Crossman & Co., told SN. “If you have those conditions, it makes sense to see a lot of grocers coming in and addressing the area.” 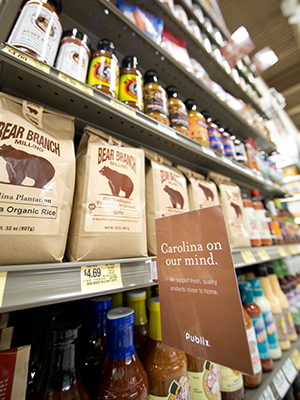 “Across the Triangle, population growth and employment growth is tying us together,” Quinn told SN in an interview. “Around Cary, 65 to 85 new people a day are moving to the area. Schools are busting. Homebuilders are doing great, and homes listed for sale are going down. And we’re no longer a single-horse town in terms of the tech industry, unlike Charlotte which relies so heavily on the banking industry. So I think the growth here is sustainable.”

Population in the Raleigh-Cary MSA, including Wake, Johnston, Nash and Franklin counties, is estimated at around 1.2 million, while the Durham MSA is home to 534,000 people and includes Durham, Orange, Chatham and Person counties. Between 2000 and 2010, according to U.S. Census figures, population in the town of Cary grew by 43.1%; Raleigh by 46.4% and Apex by 85.6%. Median household incomes top $100,000 in Cary.

In addition to paying higher rents, supermarkets are reacting to the rapid residential growth by locating their stores at high-visibility sites along highways. The proposed Wegmans site, Quinn noted, has less attractive demographics in its immediate vicinity and is adjacent to a mall, the Cary Towne Center, beset by withdrawal of anchor tenants Macys and Sears. But the area, thanks to good access, remains extremely attractive, he explained. 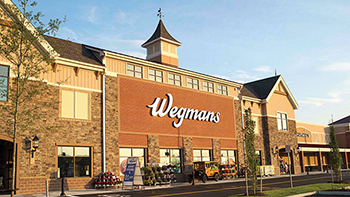 Wegmans is said to be planning a store in Cary, N.C.

“It’s not just about the radius but the drive time,” Quinn maintained. “If there are vulnerable supermarkets, it’s those stores that were probably built for protection within major subdivision areas, as opposed to being out on the highways. They might start experiencing some weakness in sales.”

While a lack of choice in so-called food deserts plagues some communities in the South, the Triangle experiences just the opposite. Concerned for impacts to the environment and the quality of life that’s made towns like Cary and Apex shoot to the top of any number of best-places-to-live lists, some supermarkets have experienced resistance to proposed sites there, including recently, Lidl and Publix.

As Wegmans expands to the South and Publix marches North, the pending collision in the Carolinas will be “the biggest battle in the supermarket sector during the next decade,” Burt P. Flickinger III, managing partner of Strategic Resource Group, told SN in an interview. The retailers, each lauded for exemplary customer service and cultures, and each with a cult-like following, would encounter one another at a point roughly equidistant from their Rochester, N.Y. (Wegmans) and Lakeland, Fla. (Publix) home offices.

Flickinger said he felt the presence of well-run and well-capitalized competitors in the Carolinas will challenge the formidable Wegmans to make the kind of impact its arrival made in other new markets like Massachusetts. Retailers, he added, have also taken lessons from companies like Village Super Market, which according to Flickinger “has battled Wegmans to a standstill in New Jersey and are chasing them into Pennsylvania and Maryland.”

Publix, he added, “has much better prospects at going toe-to-toe with Wegmans than they might have at the start of this decade,” citing strategic operating, marketing and merchandising capabilities he said have improved in recent years.

Sizing up the competition

Other competitors are not just standing by.

Food Lion, the Salisbury, N.C., division of Delhaize Group, late last year completed marketwide renewals under the “Easy Fresh and Affordable” program, a comprehensive reset of store layouts, offerings, staff and training initiatives and price investments pivoting the once process-dependent retailer toward a consumer-centric model favored by companies like Kroger and Harris Teeter. 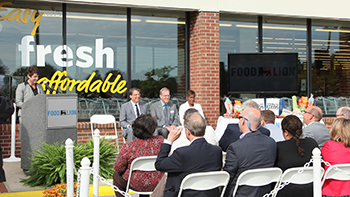 The changes in Raleigh, completed at 162 stores last fall, are fueling a turnaround that’s grown overall basket sizes and comp sales at Food Lion, officials said. Food Lion’s next steps could come in the form of an e-commerce offering and improved buying muscle expected to be imported by way of a coming merger with Dutch rival Ahold, whose Peapod subsidiary gives its supermarkets an omnichannel capability. That deal is expected to close later this year.

Food Lion commands the third largest market share in the Raleigh-Cary MSA and is second to Walmart in Durham, according to Metro Market Studies.

Kroger acquired Harris Teeter in 2013 — a deal analysts said helped both companies muscle up to withstand the Publix expansion — but still runs the stores as a separate division. The Cincinnati-based retailer also operates Kroger banner stores in the Triangle out of its Mid-Atlantic division and thus far has resisted integrating the banners in North Carolina, although it last year it converted a group of Harris Teeters in Nashville. Combined share of the two banners – whose differences include a union workforce at Kroger stores, and a slightly more upscale positioning and a click-and-collect Internet shopping for Harris Teeter — would make Kroger the largest operator in both MSAs.

Kroger officials have noted the opportunity to increase the penetration of Harris Teeter stores in its existing markets, and has added three net stores to the Raleigh-Cary MSA since the acquisition, according to Metro Market Studies. Kroger stores are also improving: the Mid-Atlantic division in January announced the completion of produce resets at 11 Kroger bannered stores in the Triangle, adding market-style slant-top tables and larger refrigerated produce cases with new misting systems. These larger displays helped Kroger stores add more organic produce to the departments, the company said.

Quinn said he expects to see Harris Teeter achieve a denser concentration of stores — perhaps by reaching into its new parent’s bag of tricks.

“I think Kroger is going to drive [Harris Teeter] into more substantial merchandising ideas, like the Marketplace stores you see out in Phoenix and in other markets,” he said. “I think you may start to see that around here.”

Based in nearby Winston-Salem, Lowe’s Foods operates 15 stores in the Raleigh-Cary MSA, according to Metro Market Studies, with 14 under the Lowe’s banner and one Just Save discount store. A year ago, Lowe’s announced a “commitment to growth” following the renovation of 10 sites and three new stores. The rebranding makes a strong statement behind signature private label prepared foods and highlights the company’s local roots and local offerings.

“Lowe’s Foods has gone through a remodeling program that can compete with anybody,” said Quinn. “They run some very nice stores.”

While the Triangle is a good place to be if you’re ready to grow, it can be rough on those taking a breather. Wal-Mart Stores commanded No. 1 market share in both Durham (22.9%) and Raleigh-Cary (24.9%) in 2015, according to Metro Market Studies, although those figures are likely to take a shave with the January closure of a Walmart Supercenter in Durham, and two Walmart Express small stores located in the Raleigh-Cary MSA.

Observers said Walmart has felt the effects of food retailing competitors that have narrowed the pricing gap with Walmart while widening their lead in perishable presentations. Walmart officials have acknowledged the chain is in transition, focusing on revamping stores and building an integrated e-commerce capability it sees as a key to winning the race over the long term.

The Fresh Market, with 11% of its stores in North Carolina, could be the most exposed to the new influx of Wegmans and Sprouts stores, according to Bill Kirk, an analyst at RBC Capital Markets.

Sprouts, with a strong price image and wide selection of perishables, aims to convert conventional supermarket shoppers but has been especially tough on specialty retailers like The Fresh Market, analysts say. The Carolinas are in the meantime awaiting the offering of Lidl, the Germany-based Aldi rival now establishing a U.S. base. Lidl has revealed that its stores would be nearly twice the size of Aldi locations — or, roughly the size of a Food Lion.