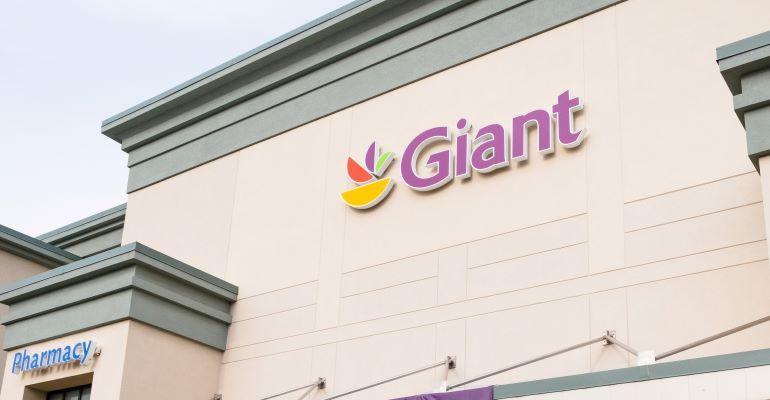 Giant Food of Landover
With the new plan, Giant Food said it will invest approximately $800 million in past and future pension benefits for member workers.
News>Retail & Financial

About 18,000 Giant Food associates represented by United Food & Commercial Workers (UFCW) Locals 400 and 27 have approved a plan to shift to a variable annuity-based pension program (VAPP).

Landover, Md.-based Giant said that, under the agreement, the current pension plans — the Food Employers Labor Relations Association (FELRA) and UFCW Pension Plan and the Mid-Atlantic UFCW and Participating Employers Pension Plan (MAP) — will be combined into one plan to provide past pension benefits. Going forward, Giant members of UFCW Locals 400 and 27 will participate in a new VAPP to receive future retirement benefits.

With the transition, Giant Food said it will invest approximately $800 million in past and future pension benefits for member workers.

“We’re pleased that this agreement has now been implemented,” Giant Food President Ira Kress said in a statement. “By making this significant investment to help stabilize and secure pensions for our associates, we feel that we are doing the right thing for our employees, who are dedicated to serving our customers day in and day out.”

The implementation of the new pension scheme comes after UFCW 400 and 27 members ratified the accord on March 5, 2020, according to Giant. Part of Ahold Delhaize USA, Giant operates 164 supermarkets in Virginia, Maryland, Delaware and the District of Columbia and has about 20,000 associates overall.

Zaandam, Netherlands-based Ahold Delhaize said that, to help fund benefit payments, the federally chartered Pension Benefit Guaranty Corp. (PBGC) has agreed to provide financial assistance to the combined plan after its insolvency, projected to occur in 2022. Plans call for Giant to pay the withdrawal liability to the combined plan in monthly installments over the next 25 years, starting in February 2021.

Giant also is slated to create a new single employer plan to cover benefits accrued by associates under the combined plan that exceed the PBGC’s guarantee level following the plan’s insolvency. In addition, Giant plans to form a new multi-employer plan with Albertsons Cos.’ Safeway grocery chain to provide excess benefits for certain other participants in the combined plan. Giant said it aims to exercise its option to withdraw from this plan, estimated at about $10 million, at some point during the next few years.

“The agreement is intended to resolve all of Giant Food’s existing liabilities with respect to the FELRA and MAP plans and improves the security of pension benefits for associates as well as reduces financial risk for Giant Food,” Ahold Delhaize stated.

Landover-based UFCW 400 and Baltimore-based UFCW 27 represent workers from both Giant Food and Safeway.

Just over two weeks ago, Ahold Delhaize’s Stop & Shop chain announced that UFCW Local 1500 in New York ratified an agreement for a $229 million investment in member pension benefits. Plans call for the Quincy, Mass.-based grocer to end its participation in the UFCW Local 1500 Pension Fund and migrate member employees to the Local 1500 Annuity plan, a VAPP. The pact covers about 8,000 current Stop & Shop workers who are members of Westbury, N.Y.-based UFCW 1500.

On Dec. 1, Stop & Shop unveiled a $667 million investment in pension benefits after UFCW Locals 1445, 1449, 328, 371 and 464A ratified a plan to withdraw from the UFCW International Union-Industry Pension Fund to the UFCW and Employer’s Variable Annuity Pension Plan, formed with The Kroger Co. The accord covers about 18,000 Stop & Shop workers in the five UFCW locals.

“The pension-related investments announced by Ahold Delhaize during the course of 2020 — including those of National, 1500 and today’s announcement — have greatly reduced Ahold Delhaize’s financial exposure to the multi-employer pension plans of its U.S. brands, Giant Food and Stop & Shop, and were achieved without impacting the 2020 financial outlook due to the strong financial performance in the year to date through Q3 2020 at Ahold Delhaize,” the company said.