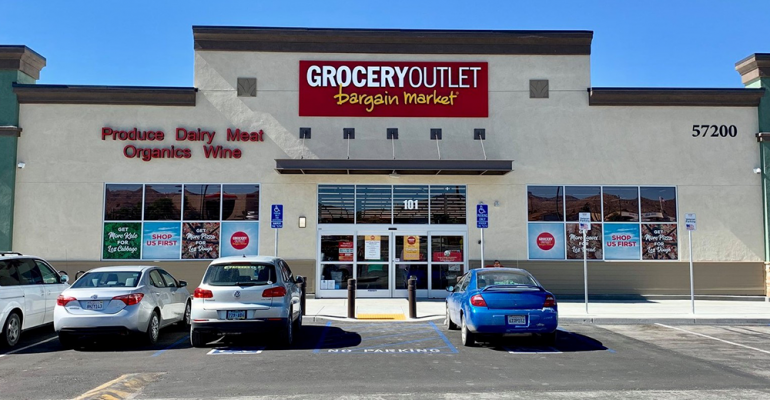 Preliminary results show net income up for fourth quarter, down for full year for extreme-value grocer

For the fiscal year ended Dec. 28, net sales totaled an estimated $2.56 billion, rising 11.9% from $2.29 billion in fiscal 2018. Comp-store sales are expected to be up 5.2% for fiscal 2019 versus a 3.9% gain in the previous year. The net sales increase is in line with the company’s most recent guidance, while the comp-sales forecast exceeds the earlier growth estimate of 4.9%.

Grocery Outlet attributed the projected net-sales increases for the 2019 fourth quarter and full year mainly to 31 net new stores opened over the last 12 months and higher same-store sales. Growth in the number of customer transactions and average transaction size fueled comp-sales gains for both periods, the retailer said.

Grocery Outlet didn’t release per-share or adjusted net earnings estimates for the quarter or year. However, when reporting 2019 third-quarter results in November, the company raised its adjusted earnings-per-share (diluted) guidance for fiscal 2019 to between 73 cents and 74 cents, compared with its previous outlook of 68 cents to 71 cents.

Analysts, on average, expect fiscal 2019 adjusted EPS of 74 cents, with estimates ranging from a low of 70 cents to a high of 75 cents, according to Refinitiv/Thomson Reuters.

As of the close of fiscal 2019, Grocery Outlet had 347 stores, including 10 new locations opened during the year, compared with 316 stores and 11 new locations at the fiscal 2018 year-end. The chain’s stores are located in California, Washington, Oregon, Pennsylvania, Idaho and Nevada.

Also late Monday, Grocery Outlet announced a secondary public offering of 14 million shares from company stockholders, including from an affiliate of majority shareholder Hellman & Friedman LLC. The H&F investor also plans to grant the underwriters a 30-day option to buy up to 2.1 million additional shares. That followed a secondary offering of 13 million shares unveiled in October.