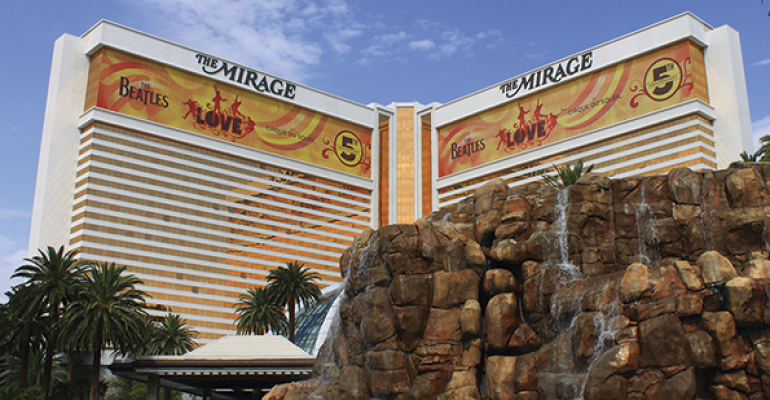 <p>The NGA Show will return to the Mirage Hotel and Casino in Las Vegas this month.</p>
News>Retail & Financial

&ldquo;Lower gas prices are beginning to help, and consumer trends in general are advantageous for independent operators.&quot; &mdash;PETER LARKIN, NGA

Despite a still-competitive environment and a challenging economy, the outlook for independents is brighter than it has been, Peter Larkin, president and CEO of the National Grocers Association, told SN.

“Lower gas prices are beginning to help, and consumer trends in general are advantageous for independent operators as shoppers look for local sourcing of perishables and put a greater emphasis on fresh. In addition, independents have adopted important cost disciplines during the economic turndown that are helping them achieve better bottom-line results.

“The combination of those factors makes me very optimistic.”

Larkin spoke to SN a few weeks before NGA holds its annual convention, which is scheduled for Feb. 8 through Feb. 11 in Las Vegas.

He said NGA intends to take a different approach in its opening general session — highlighting what makes independents special and differentiated from the chains through five short videos, each of which will have a distinctive focus: community involvement, people, fresh, partnerships and innovation and technology.

“The purpose of the videos is to show how well independents are doing — to show how they are winning in the marketplace by focusing on each of these five areas,” Larkin explained.

Other highlights of the 2015 NGA Show will include 40 workshop sessions featuring 140 speakers, half of whom will be retailers and wholesalers “so the content will be very practical and member-driven,” he noted.

Six pre-convention workshops — up from just two a year ago — scheduled for the afternoon of Sunday, Feb. 9, offering tactical, interactive four-hour sessions on various topics:  competing with dollar stores; ESOPs; online training; a refresher course for graduates of the Executive Leadership Development Program at either Cornell University or the University of Southern California; produce marketing; and meat merchandising.

The latter two sessions will include participation by the Produce Marketing Association and the National American Meat Institute, respectively — two of NGA’s show partners. The other partners are the General Merchandise Distributors Council, the Center for Advanced Retail and Technology, the Brewers Association and the Retail Solutions Providers Association. All but the last two have previously  partnered with NGA at its convention.

To make room for the additional number of pre-convention workshops, the financial conference that has traditionally preceded the show has been incorporated into a finance track as part of the daily workshop sessions, Larkin pointed out.

A show-floor reception is planned for Monday, Feb. 9, after the exhibits close for the day, “to give attendees another networking opportunity to mix in a more informal environment,” Larkin said.

A case-study competition among students from 13 universities — up from eight a year ago — that seeks to address real-world issues is also planned.  This year’s topic will be “Exploring Digital versus Paper Circulars,” with the solutions available to NGA members to use in their own businesses, Larkin pointed out.

NGA will offer expanded opportunities for the students to interact with retailers, wholesalers and vendors to obtain first-hand information about the industry, he said.

A Trading Partners Collaborative Lounge operating on Sunday, Feb. 8, just prior to the start of the show, will enable retailers and suppliers a time and place to schedule meetings with each other. “We operated the lounge for the first time last year, and we’re doing it again because it was so popular and we expect more meetings to occur this year,” Larkin said.

A new emcee will host the best-bagger competition — Duff Goldman, host of “Ace of Cakes” on the Food Network.

An exhibit floor with about the same number of booths as last year is also planned for the show, though several exhibitors took larger spaces. The 2014 Expo featured the largest number of exhibitors ever, Larkin noted, “and even though we were sold out last year, we figured out a way to squeeze in some additional space this year.”

NGA plans to continue to hold its annual Expo at the Las Vegas Mirage for the next two years, at least, Larkin said, and if it needs more exhibit space, “there are potential options to expand into other rooms,” he said.

He also said next year’s convention will be a little later than usual — Feb. 29 through March 2 — because of space availability at the hotel. The show will return to its usual timeframe of early February in 2017, he added.

Looking ahead, Larkin said the economy will apparently continue to pick up, “but a lot depends on what happens in Washington.”

NGA is concerned with a host of legislative issues, he noted, including tax reform, with particular regard for pass-through entities like subchapter S-corporations and LLCs, as well as the  corporate rate for C-corporations; changes to the Affordable Care Act, particularly in terms of what constitutes a full-time employee;  cyber-security; swipe fees; new regulations for truckers; changes in NLRB rules about union elections; GMO labeling; and country-of-origin labeling.

“Having a Republican majority in both houses gives us encouragement that this Congress will be more productive than the last,” Larkin said. “We also hope to see more bi-partisan legislation.”

NGA published a major economic impact study in April 2013 that demonstrated the clout of the independent grocery sector at $130 billion in annual sales, or nearly 1% of the total U.S. economy as determined by gross domestic product statistics.

According to Larkin, “Though it’s hard to measure the impact the study has had, I can say the data is cited all the time by industry  members when they meet with  legislators at the national and local levels.”

Although NGA had  indicated at the time the study was published that it would update the data every two years, Larkin said no updates are contemplated at this time “because it’s not likely the data has changed significantly in two years.”