News that Stew Leonard’s would finally open a store on Long Island was met with an enthusiastic response from shoppers and a sigh of relief from the company, as each had eyes on the other for more than a decade.

Is Stew Leonard's really coming to Long Island? After 12 years? Mercy me. http://t.co/7N1zk58CZp

The store will be located in the Airport Plaza shopping center, adjacent to a site where Stew Leonard’s tried — and failed — to build a store previously. That site — planned for 120,000 square feet — was thwarted by the neighboring Republic Airport, which argued the planned building’s height might interfere with departing and incoming flight paths. The site announced this week will take over the site of a Dave & Buster’s restaurant which is expected to vacate the center shortly, Joshua Weinkranz, Northeast region president for the center’s developer and manager, Kimco Realty, told SN. The new site, he added, is fully approved and permitted.

Located alongside an airport, there are few nearby supermarket competitors although Airport Plaza is a large retail center whose tenants include Home Depot, Bed Bath & Beyond, and Stew Leonard's Wines. Stop & Shop and ShopRite stores are located some five miles south. A Walmart discount store and a BJ’s Wholesale Club are also nearby, as are specialty food stores Giunta’s Meat Farm and Uncle Giuseppe’s. 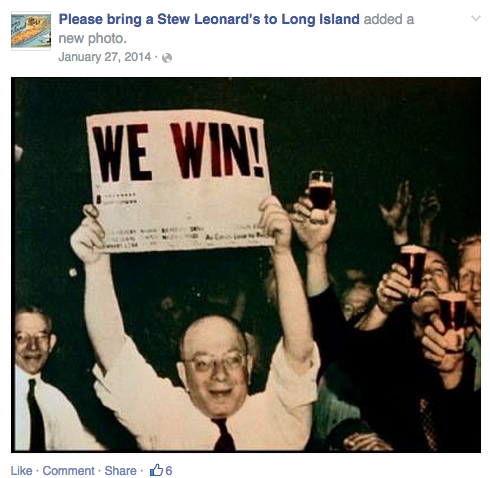