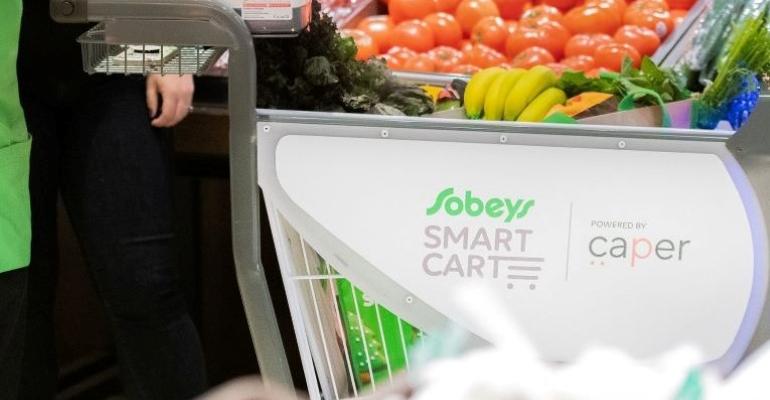 Last week, store associates began piloting the Caper Smart Cart at the 41,000-square-foot Glen Abbey Sobeys supermarket in Oakville, Ontario. The artificial intelligence-enabled cart, developed by New York-based Caper, has sensors that scan products as they’re placed in the cart, and a touchscreen displays the items selected and a running total. An attached a point-of-sale card terminal allows payment right on the cart, and once payment is approved the shopper can leave the store.

Plans call for the cart, branded the Sobeys Smart Cart, to go live with customers in three weeks, Lacoursiere said in an interview.

“We're partnering with that young startup called Caper. And what's cool is that as they bring new functionalities, because they keep on evolving and having new versions of the software, we will be able to embed those new functionalities in the cart,” he told Supermarket News.

The Glen Abbey store is using 10 Smart Carts in the pilot with employees. Currently, products are scanned in via their UPC barcode.

“You could do the same thing with a weighted article. The cart has a scale embedded in it. So you can pick up some bananas, for example, enter a code and then just put your bananas in the cart. And it would weigh them and add that amount to your total,” Lacoursiere explained. “The other thing is that as you're putting those articles inside of your cart, there are some cameras taking hundreds of pictures of that product. It’s not a functionality that's available day one, but in the future this is going to allow us to tell customers they can stop scanning. They will just need to put the products directly in the cart, and AI is going to pick up what item it is and add it your list.” 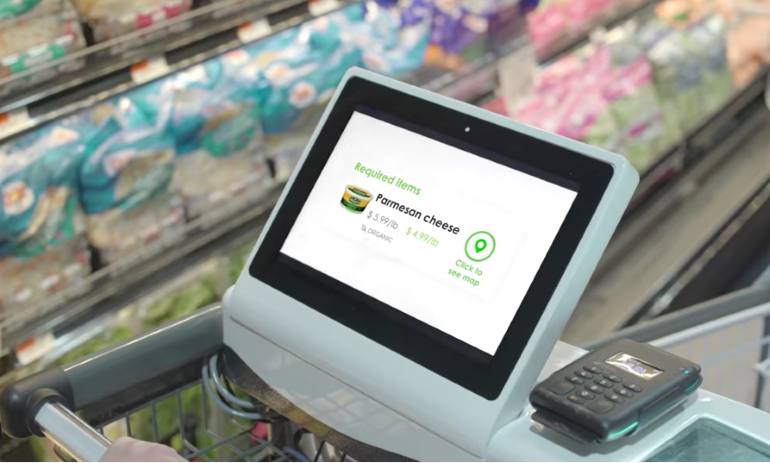 The technology also detects when a shopper removes an item from the cart and asks what’s happening.

For payment, the cart accepts credit and debit cards — tap or swipe — as well as Apple Pay and Google Pay via the user’s smartphone.

“What's cool is there's a light system directly on the cart. At the end of your transaction, as you move towards the front end, there's a specific lane where we ask the customers to past through,” said Lacoursiere. “If everything is paid and OK, the light will turn green. So that tells customers they’re good to go. They can then either leave the cart right there or go out to their car and we'll return it inside.”

Looking ahead, Sobeys and Caper expect to help customers navigate the store more conveniently as well as find savings.

“We're already planning on having wayfinding on the cart. It's not currently available but will be. You might be able to download your grocery list directly into the cart and then optimize your path across the store. We’re also going to have some personalization. So there are many functionalities we can think about that as we evolve and improve the carts available for our customers,” Lacoursiere noted.

For instance, based on the map of the store, category locations and planograms, relevant offers could be pushed out to customers using the Smart Cart.

“Today, we're able to show you some deals in the store. In the future, we'll be able to localize the carts in the store and give you some nearby deals and make some recipe recommendations,” he said. “So you can do recipe shopping at some point. Between Caper and us, we're not lacking ideas of what we can add. That's what, to me, is exciting. There's a lot of potential.”

Sobeys hasn’t set a timetable for the pilot but aims to get plenty of feedback from associates and customers before it proceeds with a rollout to other stores, according to Lacoursiere.

“It’s about solving pain points. From a checkout perspective, you think about waiting in lines and the inconvenience of having to take a product off the shelf, put it in your basket, take it out again at the checkout and put it back in the bag in your basket,” he said. “So the main benefit is to invest in the customer experience to be able to have a frictionless checkout experience in our store.”