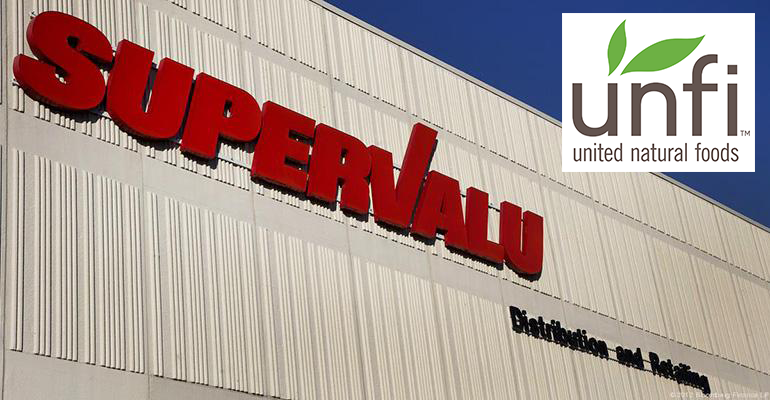 Under the transaction, United Natural Foods would buy Supervalu for $32.50 per share, a 67% premium from the stock’s $19.45 closing price on July 25, and assume the Minneapolis-based company’s outstanding debt and liabilities.

United Natural Foods reported total sales of $9.3 billion for 2017, its most recently completed fiscal year, while Supervalu posted revenue of $14.2 billion in fiscal 2018.

"This transaction accelerates United Natural Foods' ‘Build out the Store’ growth strategy by immediately enhancing our product range, equipping us to bring an attractive, comprehensive product portfolio to an expanded universe of customers," Steve Spinner, chairman and chief executive officer of Providence, R.I.-based United Natural Foods, said in a statement. "Combining our leading position in natural and organic foods with Supervalu’s presence in fast-turning products makes us the partner of choice for a broader range of customers. Together, we can provide our better-for-you products as well as other high-growth segments, improving customers' competitive advantages in a dynamic marketplace.

“These benefits, plus our increased efficiency and productivity, will enable us to create value for our shareholders, enhance opportunities for our suppliers, provide a broader assortment for our customers and create new prospects for our associates over the long term,” he added.

Plans call for Spinner to lead the combined company and for Sean Griffin, chief operating officer of United Natural Foods, to oversee the integration of Supervalu after the deal is finalized. Griffin will head a committee with executives from both United Natural Foods and Supervalu to leverage each company’s best practices, deliver key synergies and an ensure a smooth integration.

The acquisition also will bring about Supervalu’s exit from the grocery retail business. The companies said that United Natural Foods plans to divest Supervalu’s retail assets “in a thoughtful and economic manner.” No timetable was given. Supervalu currently operates 114 supermarkets under the Cub Foods, Hornbacher’s and Shoppers banners.

"The combination of United Natural Foods and Supervalu provides a substantial premium and delivers certainty of value to our stockholders, meaningful benefits to our customers, expanded opportunities for our employees, and the ability for us and our vendors to efficiently serve a varied customer base," stated Supervalu CEO Mark Gross.

For Supervalu, the transaction with United Natural Foods comes amid a proxy battle to overhaul its board of directors. Investment firm Blackwells Capital LLC has nominated its own slate of directors and called for changes in Supervalu’s management, saying its top executives have pursued a misguided growth strategy and should explore other options, including a potential sale of the company. A board vote is scheduled for Supervalu’s annual shareholders meeting on Aug. 16.

Struggling to compete with larger grocery companies and fast-growing online players, Supervalu has been revamping its business to bolster wholesale operations and firm up its financial footing. Food wholesale now accounts for the lion’s share of the company’s revenue: 78% of total sales in fiscal 2018, up from about 44% only two years ago. Supervalu’s wholesale arm serves a network of 3,437 stores, including 3,323 stores operated by its food distribution customers.

"We have been executing an ambitious strategic transformation for over two years. We believe that this transaction is the best and natural next step for our stockholders, customers and employees,” Gross said of the acquisition by United Natural Foods. “I am very proud of the unwavering commitment and focus of our employees in driving our strategic transformation and serving our customers.  I am confident that, together, Supervalu and United Natural Foods will be well-positioned to succeed — and to help our customers succeed — in today's grocery landscape."

United Natural Foods said the acquisition of Supervalu will greatly expand its customer base, including across more retail channels, as well as extend its geographic market coverage. Also, United Natural Foods expects more cross-selling opportunities via the addition of high-growth perimeter categories such as meat and produce to its natural and organic products. The company, too, projects run-rate cost synergies of more than $175 million by the third year after the acquisition.

Both of the companies’ boards have approved the transaction, which is expected to close in the fourth quarter pending regulatory and shareholder approvals and other customary closing conditions.

Also on Thursday, Supervalu reported its fiscal 2019 first-quarter results. Sales for the 16-week quarter ended June 16 totaled $4.76 billion, up 35% from $3.52 billion a year earlier, fueled by the 2017 acquisitions of Unified Grocers and Associated Grocers of Florida. Wholesale revenue surged 49% to $3.81 billion, while retail sales dipped 0.6% to $901 million. Same-store sales edged up 0.4% but were more than offset by lost sales from closed stores, Supervalu said.

Learn more about food retailing — e-commerce, delivery, consumer trends, data and more — at the inaugural SN Summit, held Oct. 1-3 in Dallas, the only conference where food retailers and restaurateurs learn from each other.