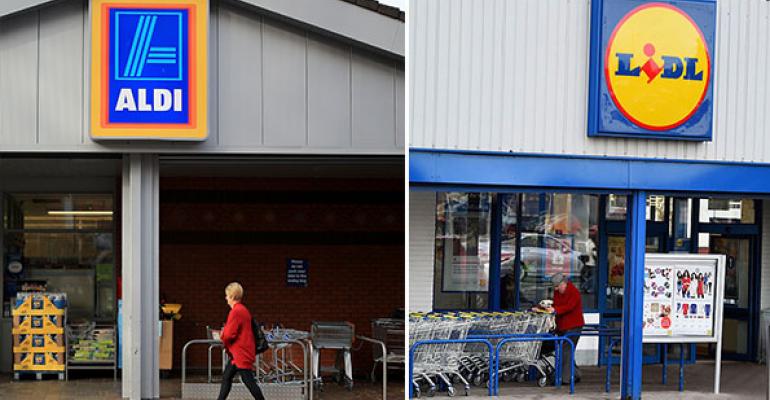 Aldi’s rapid expansion and Lidl’s pending U.S. arrival aren’t likely to have as devastating an effect on top U.S. grocers as they had for counterparts in Europe, but their invasion will likely prove especially problematic for smaller operators and those focused on lower-income shoppers, an analyst said in a report Thursday.

And though their overall share of the U.S. market is not especially significant today, both Aldi and Lidl have demonstrated the ability to improve their offering as they grow, representing a threat over the longer term to a wide range of retailers.

“All retailers need to treat Aldi (and at a later date Lidl) as a meaningful threat — and to be dismissive will likely prove to be a tactical/strategic error,” the report, authored by Deutsche Bank retailing analyst Karen Short and colleagues, said. “All retailers — irrespective of income demographics — need to keep an eye on Aldi’s evolution, particularly given the success they have had in the U.K.”

The report argues that top U.S. grocers like Kroger and H-E-B are better prepared than European conventional supermarkets to withstand price-focused competition, having already adjusted to a significant threat from Wal-Mart Stores in part by becoming more competitive on price themselves and adjusting to operating under narrower margins. 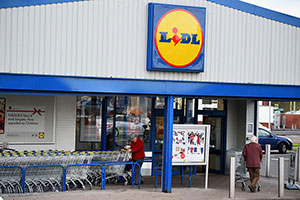 The “Big 4” grocers in the United Kingdom, by contrast, were caught raising prices when Aldi and Lidl attacked, and the market’s relative dearth of smaller competitors left them more vulnerable than a fragmented U.S. market would, the report noted.

Those players — Tesco, Morrisons, Sainsbury’s and Asda — have all seen their market share and margins drop significantly, while Aldi and Lidl have grown store counts by around 7% annually since 2004, and today control around 8.3% of the U.K. between them. That share has come almost entirely from the “Big 4,” which have seen combined market share decline from nearly 70% in 2011 to 64.2% today, the report said, citing internal research and Kantar Retail figures.

Both Aldi and Lidl are German-owned, limited assortment discounters with similarly efficient structures enabling them to offer significant price advantages, primarily on private brands. Aldi has operated in the U.S. since 1976 but is in the midst of a plan to build 500 new stores before 2019. Lidl has said it would enter the U.S. no later than 2018 with sources expecting as many as 100 stores in the Mid-Atlantic states.

According to the report, smaller food retailers with low market shares are likely to be most vulnerable to the discount competition — a threat that could trigger additional consolidation among food retailers seeking to boost share.

“We think smaller, weaker conventional grocery chains are very vulnerable to Aldi’s and Lidl’s expansion,” Short wrote. “The most at-risk would be the grocers that lack scale and do not have leading local market shares (i.e., outside the top 4 in any market). So at the end of the day, the rise of the hard discounter will ultimately accelerate consolidation in the U.S. in our view.”

In the near term, stores servicing the most price-sensitive customers are most at risk, Short added, citing Aldi’s leading pricing in proprietary market studies in New Jersey and Nashville. In Nashville, Supervalu’s Save-A-Lot chain was closest on price to Aldi — and scored better in meat, a key traffic driver — but “we believe that [Save-A-Lot] may also be the most exposed to Aldi’s expansion given the demographic overlap – both grocers target value-focused consumers who shop for low-priced private label products in a smaller box format.”

A 2015 study of 12 U.S. markets where Aldi operates stores by consultant Oliver Wyman cited in the report, noted that more than half of Walmart Neighborhood Market shoppers also shopped occasionally at Aldi. Hy-Vee and Save-A-Lot shoppers were in the mid-40% range. Stores with more appeal to higher-income shoppers including Whole Foods (15% of primary shoppers also Aldi shoppers) Wegmans (12%) and BJ’s Wholesale Club (10%) were least likely to have primary shoppers who also shopped at Aldi, the report added.

However, a track record of improving its offer as it grows could signal longer-term threats to a greater field of competitors, Short noted, citing Aldi’s expansion of natural and organic goods and expanded fresh offering.