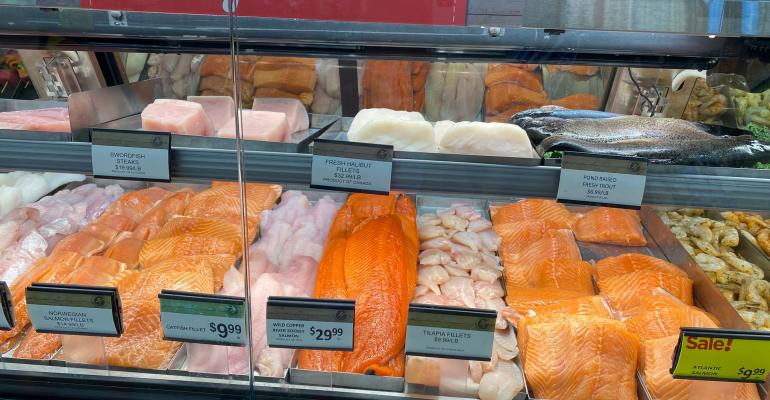 Savvy merchandising can make the holiday season an even merrier time for supermarket seafood department operators.

Related: Here’s how to be a savvy seafood stocker

While most shoppers typically focus on proteins like poultry, pork and beef for their center-of-the plate meals during Christmas, New Year’s and even Hanukkah, retailers can still spur greater seafood activity by focusing on already-popular seafood trays while also spotlighting seafood-based meal ideas, according to analysts.

Because “shrimp is the star of most holiday gatherings,” operators should offer multiple fresh and frozen varieties, said Russell Zwanka, associate professor of food marketing at Western Michigan University in Kalamazoo.

“Cooked shrimp, as well as having plenty of shrimp rings, is a super solution for parties,” he noted. “Even the surimi rings shaped like shrimp will sell well if you have the demographic looking to host a party but may not have the funds to splurge.”
Operators can also increase seafood activity by offering oysters in ice bucket displays adjacent to the fresh seafood case, Zwanka added.

While Swanson noted that shrimp trays often receive the greatest promotions among seafood options during the holidays as “that is typically what sells,” he added that “there is an opportunity to expand and promote seafood as a center-of-the-plate offering.”

Moving shoppers to seafood-based holiday meals also is a way to increase their overall basket size through purchases of associated items like side dishes and toppings, Swanson said. Seafood consumers spend substantially more on groceries in an average week than non-seafood customers and have a considerably higher average household income, reports the Arlington, Va.-based Food Marketing Institute (FMI).

Retailers can make seafood meals more appealing by situating complementary items in cross-merchandising displays and offering ready-to-go meal kits which contain pre-portioned ingredients.
“You can’t have consumers shopping the entire store to try to figure out the holiday seafood meal,” Swanson said. “That is not going to work. The selections must be in one spot.”

Generating interest in prepared ready-to-cook and ready-to-eat seafood is another strong holiday growth opportunity, he added, noting that such value-added options are more likely to appeal to younger shoppers, such as Generation Z and Millennials, who purchase seafood less frequently.

“It stems from convenience and the consumers not knowing how to prepare seafood, which can be intimidating as seafood typically is associated with a higher price tag,” Swanson said. “It’s tough to convince the uneducated consumer to purchase seafood because of their fear of failure during preparation.”
Though fresh prepared items are typically more visually appealing, many retailers primarily offer frozen value-added selections which are less labor-intensive to create and merchandise, he added.

To spur at-home meal preparation, meanwhile, it’s critical for operators to provide recipes and cooking instructions and have knowledgeable seafood department associates available to educate consumers and make it easier for them to create dishes in the “rushed” holiday season.

“Seafood is a tough sell for a cook who lacks confidence,” Zwanka said. “Stores are there to make lives easier and help build confidence. Showing shoppers how they can develop meals quickly is a way to sell more seafood, particularly because fish has a reputation of taking a long time to prepare and cook.”

While retailers will benefit from emphasizing seafood for Christmas and New Year’s meals, they should also keep the everyday buyer’s interests in mind during the season, Zwanka said.

“It’s important to realize that there are two special event eating days and at least fifty-eight other days where people are still trying to feed their families with value,” he said. “The key is to understand that both shoppers are in your store at the same time.”

Because value “is always top of mind for regular shop customers,” Zwanka said retailers should merchandise smaller pre-wrapped seafood packs and seafood filets that are sold loose in the case, while also working to trade customers up to higher-end species, such as sockeye salmon and halibut, for the special occasions.