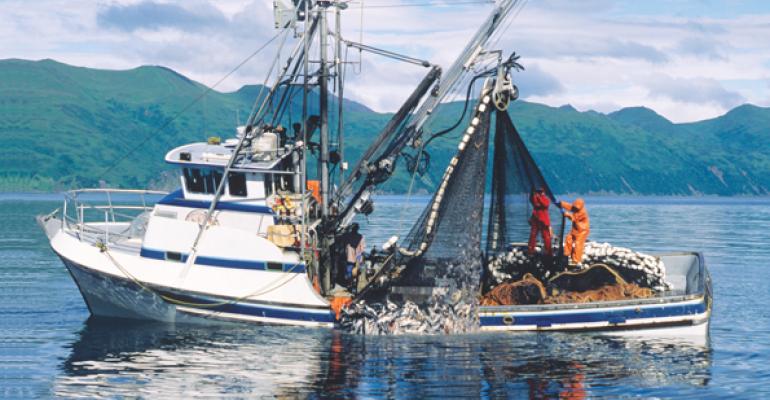 <p> When disaster strikes, supermarkets offer &quot;a suitable alternative for the customer so that they have choice when they get to the seafood case.&quot;</p>
Product Categories>Seafood

Even with today’s global supply chains, extreme weather events and other disasters can still wreak havoc on the seafood industry. When catastrophes occur, supermarkets are often left scrambling to make up the lost product.

Retailers and industry experts that spoke with SN described varying approaches for reacting and preparing for these types of disasters.

“When you’ve got a storm like Sandy that comes through like it did on the Northeast, your entire fishing industry is toast. You’re out of business. So there really isn’t a whole lot you can do as far as seafood is concerned with that kind of a scenario,” said Phil Gibson, a consultant at San Ramon, Calif.-based Encore Associates. Gibson previously served as director of corporate seafood at Safeway.

Due to the rough weather, fishing boats remained stuck in port, and local wholesale markets had few products for sale.

Ahold USA was one retailer whose fresh seafood supply took a hit as a result of the storm, particularly its headfish in the Baltimore area.

“And any time that you get that, a storm of that magnitude that it comes up the coast … it limits availability for quite a period of time. In terms of those items, as well as some of the other fresh caught items in that particular region,” said Jeff Josselyn, senior director, meat and seafood procurement.

To replace missing product in such circumstances, Ahold turns to previously frozen fish as well as similar species caught in other areas of the country.

“But it’s really just trying to find a suitable alternative for the customer so that they have choice when they get to the seafood case,” said Josselyn.

For Roche Bros. Supermarkets, Wellesley Hills, Mass., Sandy caused a day or two of delay on certain seafood items. The 18-store retailer sources most of its fish from the Gulf of Maine, which was spared the full brunt of the storm.

Customers also weren’t clamoring for seafood at that time.

“We didn’t have this huge demand for seafood probably the three or four days right after it because a lot of people just didn’t have power, and that’s probably not the first thing on their list when things are down is looking for seafood,” said Arthur Ackles, director of seafood.

For those that were shopping for seafood, Roche made sure to let customers know why certain items were missing.

“We didn’t have too many issues, but on the products that we did have some shortages on or some delays on, we basically put some stuff on our website and we also made sure right at the point of sale that we had a sign stating what exactly happened,” said Ackles.

As disruptive as Sandy was for some in the days following the storm, Gibson noted it was only a brief issue in the Northeast, and it didn’t have much affect on the industry overall.

“And it was horrific for the Northeast. But it didn’t really impact the rest of the country as far as the [seafood] business was concerned,” said Gibson.

The BP oil spill in the Gulf of Mexico in April 2010, on the other hand, had wide-ranging effects for U.S. seafood.

With certain items, like shrimp, it was difficult to find alternatives at the volumes that retailers needed.

“We try and do Gulf shrimp, so that really was the major issue that we had there. And in that alternative, there really wasn’t much product of USA shrimp that you could turn to,” said Ahold’s Josselyn.

“You try and offset it with the imported [shrimp] but it’s a different product,” he added.

Even retailers like New Seasons Market, a 12-store independent based in Portland, Ore., saw some ripples from the oil spill, though not as bad as associates had feared it could have been.

“The only other concern we had was the oyster industry got pretty wiped out in the Gulf, and the concern was … that Northwest inventories were going to get depleted just to meet the demand of the consumer. But again, we saw some interruption but nothing major,” said Alan Hummel, director of meat and seafood.

According to Gibson, the BP oil spill’s worst consequence was its effect on Americans’ attitude toward seafood in general.

“When you’re talking about the oil spill in particular, there needed to be more proactive information to the consumer,” said Gibson.

For weeks after the rig explosion, all consumers saw on the news was oil spewing into the Gulf waters, he said.

“And then there was the negative news coming out of the Gulf about Gulf seafood. And what people didn’t hear was the Gulf part of it. What they heard was seafood. And so they just stopped buying seafood in general for about almost a four-month period of time. We saw just horrific declines across the entire sector,” said Gibson.

“Nobody really expected it. And we were very slow to react to it,” he added.

The industry needed to have done more to educate the consumer and promote seafood’s benefits during that time, Gibson said.

After the spill, the Gulf Coast Seafood Coalition was formed to reassure consumers about the safety of products from the region and promote Gulf seafood at retail and restaurants.

For its part, Ahold tried to help customers understand the changes they saw in the seafood case.

“Even if we talk about the Gulf shrimp, it’s really communicating to the customer and letting them know what is available, what’s not available, why. Just trying to give them as much information as possible around why they’re seeing some of the choices that they are seeing in the case at a particular time,” said Josselyn.

New Seasons also tries to be forthcoming with customers when certain items are unavailable.

“We make sure that we educate and communicate not only to our staff but to our customers so they understand that’s kind of out of our control and there’s not much we can do about it,” said Hummel.

The retailer might suggest alternatives for missing products, such as sustainably farmed tilapia instead of rockfish, he added.

“A lot of the larger operations, such as Kroger or Safeway or Wal-Mart, they have supplier relationships where they’re turning large amounts, truckload quantities of products through fairly regularly,” said Gibson.

In effect, the larger companies are able to hedge against sudden changes to the market by virtue of their extensive supplier networks, so that a dramatic spike in prices in one region or product won’t impact the overall bottom line.

In the case of a large supply chain disruption, Ahold will reach out to back-up suppliers to “try and source from as many possible spots or locations as you can,” Josselyn said. “And part of that is building relationships throughout the year so that you’re not just calling on those folks once in a blue moon.”

“We’re always going to have our primary suppliers that we deal with day in, day out. But it’s really about knowing what the avenues are you need to pursue in order to maintain the product flow,” he added.

Smaller retailers might find it more challenging to recover.

“I wouldn’t want to be a small operator in today’s market and really have to rely on my seafood counter because it’s very tough out there right now,” said Gibson.

New Seasons hasn’t had to deal with a major catastrophe yet, but recognizes there will be difficulties if it happens.

“The challenge that comes with that is if it’s going to hit New Seasons Market it’s going to hit everybody in the industry, so the resources just become limited for everyone. And so what ends up happening is we basically have to bite the bullet and try finding alternative species to meet the needs of the consumer,” said Hummel.

“We try to establish good working relationships with smaller producers and such, which somewhat does isolate us because we can always go back to them if there is a crisis. And with longstanding relationships or partnerships, we kind of take front line when it comes to supply,” he added.

Roche’s seafood supply would be similarly vulnerable in a disaster.

The retailer works with one main supplier for its mostly fresh fish, with back-up suppliers for emergencies.

“But if the supply chain was broken for one, it would probably be broken for all,” said Ackles.

In such a situation, the retailer would work hard to inform customers what was happening, he added.

“And in general, I think people understand that seafood is one of those things that it could be here today, it could be not here tomorrow, based on  circumstances.”