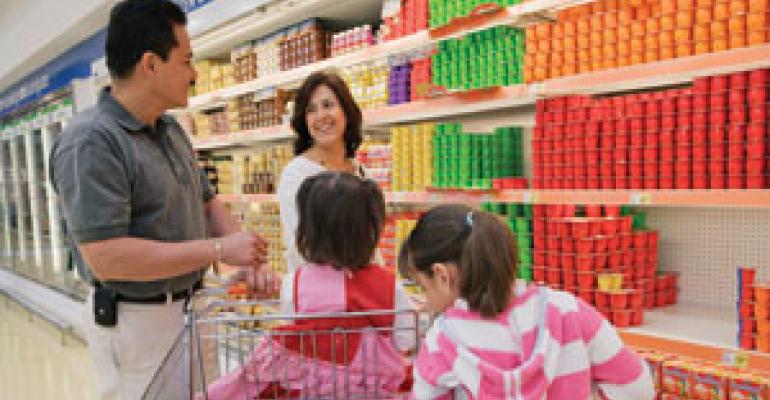 The U.S. minority population reached 100.7 million this year, up from 98.3 million in 2006, according to reports from the U.S. Census Bureau. That means that about one in three U.S. residents is now a member of an ethnic minority. Hispanics remain the largest ethnic group, followed by African Americans and Asian Americans. This has triggered a broad response among retailers in terms of new ethnic

The U.S. minority population reached 100.7 million this year, up from 98.3 million in 2006, according to reports from the U.S. Census Bureau. That means that about one in three U.S. residents is now a member of an ethnic minority. Hispanics remain the largest ethnic group, followed by African Americans and Asian Americans.

This has triggered a broad response among retailers in terms of new ethnic food sections and international aisles. But such initiatives are not only an effort to cater to ethnic populations; by offering foods from various cultures around the world, supermarkets cater to the growing number of mainstream shoppers who are more educated about unique tastes, thanks, in large part, to international travel and the growth of TV cooking shows and celebrity chefs. Customers are searching for different tastes and textures — and are seeking out retailers that meet their needs. From curry powder to gefilte fish, an ethnic assortment helps retailers differentiate their stores in a new and exciting way. To get a better idea how the food industry is handling ethnic retailing, SN held its first-ever roundtable on the topic.

Following are excerpts from the roundtable:

SN: What are some of the dos and don'ts that you've learned about marketing to ethnic groups?

MINYARD'S HIGHSMITH: We have found out we need to clearly understand who the audience is and who the ethnic group is that we're marketing to, and the number of customers by their ethnic background and our sales goals. If you have a store that serves 80% Latino consumers and other stores serving 50% Latino consumers, you cannot market them the same way.

SN: What are some of the new ways that you've reached out to your ethnic clientele?

HIGHSMITH: What we're testing now in a couple of stores is merchandising international food in the front of the store. Normally, it's down the aisle somewhere. It's about 90 to 190 feet of low-profile counters featuring items representing the ethnic mix that our survey and focus group shows that we have in that location. We've got flags from 25 countries represented. We have a multiethnic mix in these stores. And a lot of the product was requested from our customer base.

JUNGLE JIM'S VITEK: We're putting our produce ethnic mix, whether it be African American or Asian or Hispanic, out in huge bulk displays.

SN: Bob, you told SN recently that you were considering marketing your Carnaval-brand private label to other retailers. Have you decided to do so?

HIGHSMITH: We're going through a major transition, where we sold our warehouse and we're going to AWG for service. Because of this, we have not expanded that Carnaval label. We may offer it to other retailers in the future. But at this point, we've decided just to hold back and reserve it for ourselves.

SN: How important is the private label when it comes to marketing to ethnic groups?

HIGHSMITH: It's extremely important, because you're giving them a quality item at a great price. The Carnaval label is also important in very key items like tortillas, peppers and canned beans, and we will continue with that.

SN: Which ethnic foods are growing in popularity?

SN: What is that attributed to?

WALLACE: The U.S. is doing a lot more business with Indians, and a lot more Indians are immigrating into the U.S. A lot of the technology companies are working with Indian firms. So it's just a big cultural exchange, and there are certain areas of the country where those populations are just starting to boom. And a lot more Indian restaurants are popping up all over the country.

NEW AMERICAN DIMENSIONS' WHITMORE: You're seeing Asian and Latino types of marinades with meats, chicken and soups. Everyone seems to be very interested in the soup and seasoning category as well, in terms of combining convenience with some traditional authentic products.

SN: Have you found that some retailers don't have a good understanding of their demographics? For instance, perhaps they know they have a large Asian population, but don't understand if it's mostly Chinese, Taiwanese, etc.?

WALLACE: Yes, a lot of retailers think that a one-size-fits-all approach is the right mix for Asians. But we are able to really show them that to have success you need to target the correct segment of the population.

SN: What are some of the misconceptions about the shopping and spending behavior of consumers who buy ethnic food?

WHITMORE: Hispanic shoppers make a lot more shopping trips per month. A study that we did with ADVO [a direct-mail media company] and FMI [Food Marketing Institute] shows that Hispanic shoppers are going up to 26 times a month. Because they have a tradition of shopping on a daily basis back home, they tend to want to buy their produce fresh as often as possible. A lot of supermarkets here in Los Angeles have van services for people who don't drive cars. They pick them up and bring them in. That allows a lot of these shoppers who don't have transportation to shop on a more regular basis.

INTERTREND'S XIE: Asians also shop much more frequently than mainstream consumers, once a week at least. And also, when they shop in grocery stores, they tend to go with everybody in their family.

WHITMORE: Some people think Asians are not that open-minded to American brands and that they carry over their food consumption habits from their countries. But actually they are open-minded to new products, new flavors and new brands.

XIE: As long as you have a quite aggressive marketing approach, Asians would like to try your brand. And once they really like it, they can become very loyal to you.

WHITMORE: There's a stereotype that all Hispanics are very brand-loyal. But they are open to trying new things; these women who are going into the workplace and have less time to do the traditional cooking are trying new products. It can be price-driven, but it also has to do with quality. So you can't cut on the quality with these consumers.

SN: And what would you say to retailers who are concerned that by growing their ethnic food assortment they risk alienating their mainstream shoppers?

WHITMORE: Yes, that will happen in some neighborhoods. There's going to be some backlash. But some stores are integrating the different communities very well. I've seen in areas of Los Angeles where there are predominantly Hispanic and African American consumers in the same store. They're starting to blend some of the cooking traditions [of different ethnic groups].

HIGHSMITH: We have a number of stores that are 40% to 50% Hispanic, and maybe 30% or 40% African American, and the balance is mainstream white. We relate to that customer base the best we can with the item mix. We think it's important to them and [we] take our chances.

VITEK: We run demos about four or five times a week. So someone shopping our Middle Eastern section can come and see something Hispanic being cooked. That's how we get the crossover. When we do Oktoberfest, we just don't hide it back in our German section, we bring it out to the middle of the floor so everybody can walk by and enjoy it and see what it's about and hopefully understand.

HIGHSMITH: We have more trouble relating to first generation than we do second and third, because of all the various products they will try and will buy. And we try our best to relate to both. But most of our customer base is at least second generation.

SN: What are some of the more unique ways that retailers have merchandised or promoted ethnic?

WALLACE: They are starting to put the sections up front so that people know that they have the selections. And they have bilingual signs and flags from different countries. A lot more retailers are starting to do demos with some of the ethnic products so that people can get some crossover. Those type of promotions have generated a lot of interest, because customers are trying new, exotic food, and also getting a little insight into the different cultures that the foods come from.

SN: What would you say are the top holidays or celebrations for Hispanics and other groups?

WALLACE: For Hispanic Mexicans, it's tamale season, which is the end of October through the New Year. In the Indian population, Diwali is the Festival of Lights, which is in October. And with Asian, it's the Lunar New Year. Different Asian populations celebrate in slightly different ways. So we just kind of group it as Lunar New Year.

HIGHSMITH: For us, tamale season is huge. We build displays, sample tamales and have cooking classes.

XIE: The Moon Festival is also a very important holiday across many Asian ethnicities, because it's kind of like an Asian Thanksgiving. There's also a very specific food for Moon Festival, which is the moon cake.

SN: As for merchandising, should retailers merchandise ethnic foods by regions such as Puerto Rican vs. Colombian, etc., rather than lump them all under the Hispanic banner?

VITEK: We lump them in an area, but then we break them down as best we can. It's probably a little bit easier on my Asian side to break them down, just because we go by the product's location, where it's coming from — Taiwan, Thailand or the Philippines.

SN: What value-added services do you provide to build loyalty among your ethnic shoppers?

VITEK: We try to bring calling cards so our customers can have communications with family back home.

HIGHSMITH: We have bilingual employees in the stores, and health clinics in some stores. We have everything from jewelry stores to insurance, to music, to shoes. We have little boot arcades where we sell Western boots. We have a program where people can buy stuff here on a layaway plan and send it to Mexico. And we have Western Union, where we do a lot of money transfers in our Latino stores.