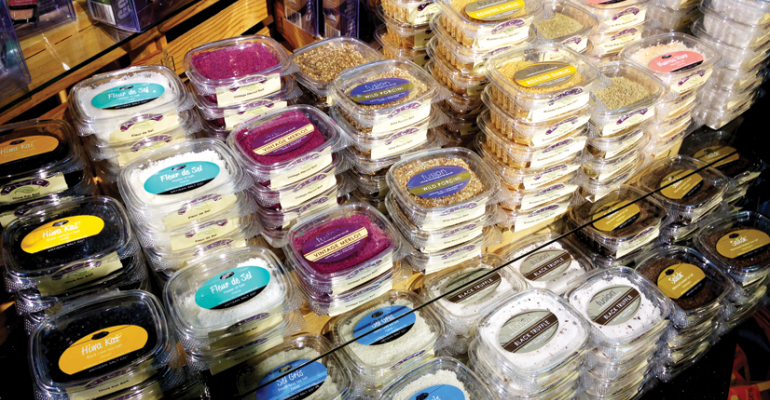 Salt of the Earth (and the Sea)

Artisan salts &mdash; in a range of colors, flavors and textures &mdash; have become quite the commodity

That Himalayan trek probably won’t make it off your bucket list any time soon, but ocean waters crystallized within the Himalayas 250 million years ago are surprisingly within reach thanks to the availability of specialty salt.

While table salt has been widely industrialized in the U.S., the saltshakers in other areas of the world contain artisan-quality salt that is unrefined and in many cases, harvested by hand, experts told SN.

Take, for instance, Fleur de Sel (Flower of Salt), one of the first sea salts to delight Americans about a decade ago. The finely textured grey granules are ideal for salting caramels and cupcakes.

As part of the harvesting process, a thin layer is raked by “paludiers” from the surface of ocean water that has been guided into shallow marshes for evaporation by sun and wind. Collection is so delicate that at one time only women could be paludiers since men were thought to be too rough.

Specialty salts are sourced close to home too. Redmond Real Salt is one of more than 100 natural, smoked and infused salts available for taste exploration at PCC Natural Markets, a Seattle-based organic grocery store and co-op. Redmond Real Salt comes from an ancient ocean where Redmond, Utah is now located.

Salts that predate civilization are thought to be especially pure since humans weren’t around to pollute the earth. These salts also differ from everyday table salt in that they’re unrefined, said PCC grocery merchandiser Scott Owen.

Pink salts, like the ones harvested from the Himalayas, get their color from iron oxide.

Alaea Hawaiian Sea Salt, Cyprus Flake Salt and Murray River Australian Salt are among the pure varieties repacked by PCC in see-through containers that it merchandises in the deli department.

Salt of the Sea

Sea salts are essentially solar-evaporated ocean water that is naturally dried, crushed and screened with mesh to the desired grain size. A flaked salt is what results when seawater is naturally evaporated and slowly reheated, Owen explained. Different textures serve different purposes.

“Salt powders are preferred for flavoring popcorn, and because it dissolves quickly, for use in baking or in soups,” Owen said.

Fine salts are most common, and since they flow freely from saltshakers, serve many purposes. Then there is kosher salt (kosher comes from its use to remove surface blood in making meats kosher, not because it’s kosher certified), with larger crystals that are used on the rim of a margarita glass and to salt pretzels. Coarse salt granules are about the size of a peppercorn, making them ideal for grinders, according to Owen.

Retailers opt to repack SaltWorks’ salt since it affords them the ability to use their own label. It also gives the salt a specialty feel, Novotny explained.

“It’s more of an aesthetic for [retailers],” she said. “They think it looks more artisan, like prepacked olives and shredded Parmesan.”

Sales in the specialty seasoning category were up 8.6% last year to $545 million in supermarkets, natural food stores and specialty food stores,  according to the New York-based Specialty Food Association (formerly NASFT).

“If you’re making a pasta dish you may not have truffles sitting in your kitchen but you can use truffle salt to get that same flavor,” he said.

The deli is an ideal spot to merchandise artisan salts since it’s a destination for specialty foods like cheese, Robin Cantor, deli retail manager at PCC, told SN.

Because of their unique flavor, smoked salts — developed by smoking sea salt over wood in a smoker at low temperature over a long period — are also growing in popularity.

The Kroger Co.’s QFC stores merchandise smoked salts in the seafood department when featuring salmon, and flake salts in the meat section for use with steaks, Novotny said.

The co-op’s bulk section is also home to a range of specialty salts from around the world. Coarse Celtic Sea Salt, Hiwa Kai Hawaiian Black Lava Salt and Tamise French Sea Salt, are sold from bulk bins there.

Salts in clear bins may make for an eye-catching display, but not all types are compatible.

“Some salts are air sensitive and will absorb moisture and clump or dry out so those don’t do as well,” Novotny said. “Himalayan is kind of bulletproof and any of the harder drier salts do fine, but the more specialty salts are more susceptible to air and moisture.”

PCC sells some of these sensitive salts packaged in Center Store. One example is Vignalta Herbed Sea Salt, a blend of sea salt, fresh rosemary and sage.

The seasonings aisle is a natural home for artisan salt since it’s sought by experimental chefs, Owen said. PCC uses descriptive signs to introduce shoppers to the many varieties.

The PCC Cooks program helps gourmands become acquainted with the different uses with recipes for Smoked Salt and Szechuan Pepper Wok-seared Beef Tenderloin with Roasted Plum Sauce as part of its “Date Night” menu; and Rosemary and Sea Salt Focaccia in its Pizza Napoli class.

Once a commodity category, salt is branching out beyond its role as pepper’s sidekick.

“When consumers realize there are so many alternatives to table salt — options that may be better healthwise and more interesting tastewise — they want to explore them,” Owen said.