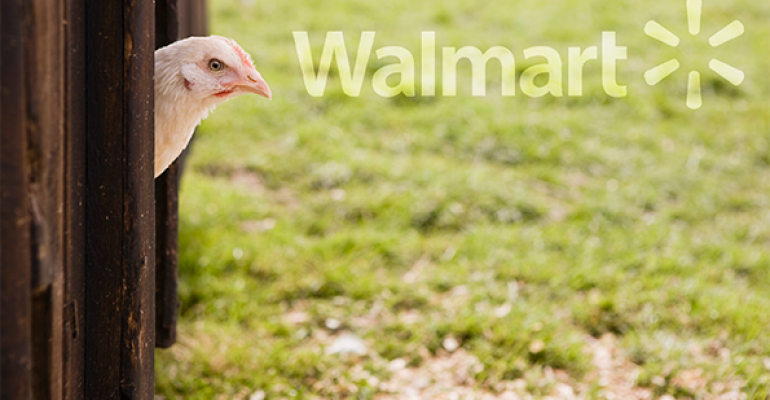 Walmart U.S. and Sam’s Club U.S. on Friday revealed comprehensive new policies around animal welfare and antibiotic use on farms along with expectations for its suppliers.

On animal welfare, the retailer has committed to the internationally recognized “Five Freedoms”:

Walmart is asking fresh and frozen meat, deli, dairy and egg suppliers to adopt the Five Freedoms and ensure they are carried out on farms. If suppliers find any instance of animal welfare abuse, they are expected to report the offender to the authorities and take disciplinary and corrective action.

In addition, Walmart has tasked suppliers with finding alternatives to animal welfare concerns such as sow gestation crates, hen battery cages and veal crates; tail docking, de-horning and castration; and euthanasia or slaughter without rendering an animal insensible to pain.

Walmart has also taken a decisive stance on antibiotics, calling for suppliers to stop using any antibiotics for growth promotion uses.

The retailer said suppliers should use the American Veterinary Medical Association Judicious Use Principles of Antimicrobials, which includes disease prevention strategies; appropriate veterinary oversight; accurate records of treatment and outcomes; careful review before antibiotics are used; and limit medical antibiotic use to ill or at-risk animals.

Suppliers will also need to follow the FDA’s voluntary guidelines related to use of medically important antibiotics.

Each year, suppliers will be expected to report on animal welfare and antibiotic use.

“Walmart is committed to selling products that sustain people and the environment,” Kathleen McLaughlin, president of the Walmart Foundation and SVP of Walmart sustainability, said in a press release. “We have listened to our customers, and are asking our suppliers to engage in improved reporting standards and transparency measures regarding the treatment of farm animals.”

In a statement, the Humane Society of the United States president and CEO, Wayne Pacelle, called Walmart’s new policies “game-changing.”

“Walmart’s animal welfare announcement is a game-changing progress and signals to agribusiness that the era of confining farm animals is ending. Battery cages, gestation crates and veal crates — along with other long-standing practices that immobilize animals — have a short shelf life in our food system. We're looking forward to continuing our work with Walmart and hope to see them put implementation timelines in place. And we’re optimistic about helping other food companies strengthen their policies to create a more humane society for all.”