Whenever a food recall garners national media attention, as the stone fruit recall from Wawona Packing Company has this week, many consumers only hear the part about “don’t eat peaches.”

An article on AOL went so far as to claim that the recall had been issued “due to a possible listeria outbreak” — except according to the FDA no illnesses have yet been reported. No wonder consumers are confused.

Multiple retailers have had to address customer questions and concerns this week on social media. Albertsons announced its stores were affected by the recall on its Facebook page, but fans were unsure which types of products it applied to. The retailer directed customers to the FDA website. 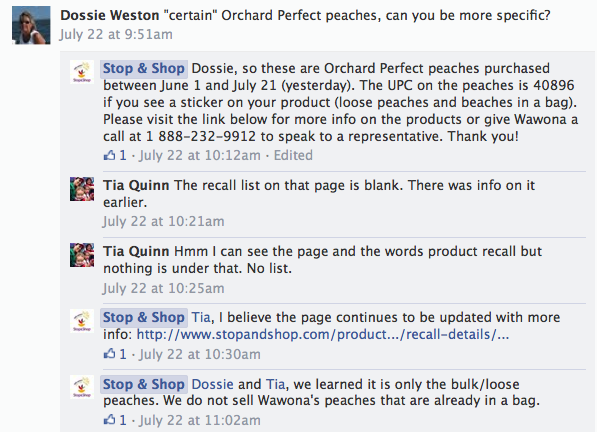 Weis Markets made a point of telling Facebook fans that its peaches were safe to eat.

Bashas’ also reassured customers about its peaches when advertising a peach promotion.

Such incidents highlight the need for better traceability of produce so that retailers can carry out more exact and timely recalls, and consumers can be assured that their local stores are doing so.