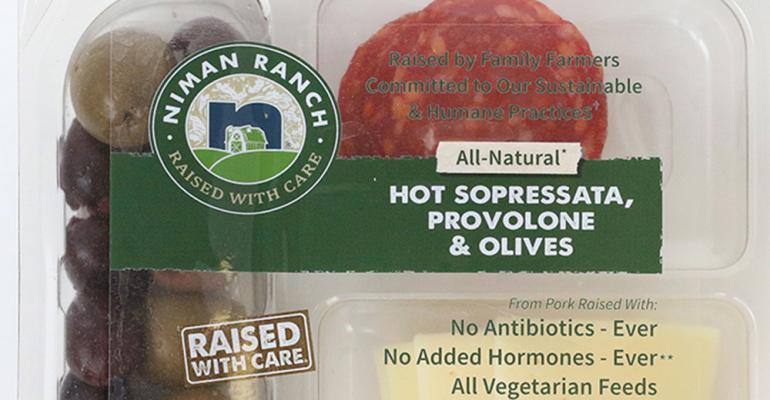 Three square meals a day are a rarity as an increasing number of consumers snack throughout the day. Moms, dads, teens and Millennials are buying mini meals and portable snacks to eat on the run like never before.

With America’s snack attack showing no signs of abating, supermarket delis are adding new products. Grocers and manufacturers are catering to strong demand for snacks that are health-conscious, high in protein, affordable and easy to grab and go.

“Traditional supermarkets are providing a lot more accessible and immediate snacking options,” said Mathes Martines, a growth expert at consultancy Beyond Brands and a veteran of The Kroger Co. and Whole Foods Market. “They’ve had to re-examine their sets.” Rather than focus on selling products by the pound, progressive retailers are looking at selling smaller portions at lower prices that are packed to go, he said. Publix, based in Lakeland, Fla., last year introduced deli snacks for adults and kids, all with convenience in mind, said Maria Brous, a company spokeswoman.

The 1,169-unit retailer’s Simply Fresh 4 Kids line has four choices packed in four-section clamshell containers. They include Cheddar & Pretzels, PB & Jelly, Turkey Slider, and Bagel & Cream Cheese, all with apple slices and juice. They were created with a dietitian to meet nutritional standards for calorie count, sodium and sugar, Brous said. The packs are made for Publix according to its specifications by Five Star Gourmet Foods. Prepacked salami and prosciutto combinations are a natural for supermarket delis, said Tom Garrity, general counsel and chief financial officer of Fra’ Mani Handcrafted Foods, manufacturer of specialty hams and salamis. The meats have a long shelf life and can be merchandised without refrigeration. Plus, there is no need for in-house labor for slicing, which avoids exposing deli workers to potential injuries, and cuts down on shrinkage.

“The trend seems to be to emphasize offerings that eliminate the need for in-house labor,” Garrity said. Fra’ Mani is looking to enter the snack-pack fray once it can increase production capacity and identify the best packaging, he said. Phoenix-based Sprouts counts charcuterie packs from Carolina’s Charcuterie among numerous grab-and-go options in its self-service deli cases, including Naturale Sopressata & Provolone with olives for $4.49 for a 3-ounce pack. But the bigger splash is from a nine-item in-house line introduced in 2015. Offered chainwide, Sprouts stores offer a selection of four to six, plus four options for kids. The snack boxes are priced by weight for $5.99 per pound; kids’ boxes go for $3.99.

“More and more Sprouts shoppers are looking for convenient meal options, and by offering these ready-to-eat selections at the Market Corner Deli, we’re able meet the needs of our shoppers while also providing value and quality,” said company spokeswoman Kalia Pang. The best-sellers are kids’ snacks, led by a Kids Meal with a turkey sandwich on wheat; and a Kids Meal with an almond butter and jelly sandwich, she said.

All under the banner Sprouts Market Corner, choices for adults include chicken, cheese, trail mix and grapes, and Brie and smoked Gouda with crackers and grapes.

Natural Grocers by Vitamin Cottage, Lakeland, Colo., whose 142 stores do not have a service deli but do emphasize grab-and-go items, are selling a six-item line of snack packs from Niman Ranch that were introduced in 2017, including a 3-ounce pack of Genoa salami, provolone and taralli crackers that sells for $3.99.

“They are doing really well and we just added their new prosciutto snack packs and are excited how well they are doing,” said Jonathan Clinthorne, manager of scientific affairs and nutrition education. The retailer was slated to feature the products in its February newsletter. “There is definitely a heavy movement towards snacking and a lot of producers are hopping on that train for healthy, clean, humane options,” said Danny Kirkovich, a regional sales manager at Niman Ranch.

Niman Ranch snack packs are also sold at Raley’s, based in Sacramento, Calif., for $4.49, and in specialty stores across the country. Niman Ranch is known for its humane treatment of animals and its sustainability practices.

Beyond meat and cheese

It’s not all about ham and salami. Big Y Foods, based in Springfield, Mass., is one of several East Coast supermarket chains carrying two-packs of Indian-style Potato Samosas and Vegetable Bhajias—an Indian street food—from Café Spice, a manufacturer that supplies Whole Foods with these items and entrées. The “small bites” were launched in response to “impressive foodservice sales,” said Café Spice President and Co-founder Sameer Malhotra. The snacks have a suggested retail of $3.99.

More Indian snacks are in the works. “We’re working on some exciting recipes for portable Indian snack items that are flavorful and healthy,” he said. Hard-boiled eggs are cropping up in many delis, including at Sprouts. Last fall, at Foragers Market, a three-unit specialty retailer based in Brooklyn, N.Y., the retailer introduced prepacked soft-boiled eggs sprinkled with sea salt and Espelette chili powder as an add-on at its salad bar. The snack features three six-minute egg halves nestled in baby kale in a sushi tray, for $2.99. They’re selling well, said Culinary Director Dan Rothman.

Eggs provide a quick hit of protein, he said. “People really love soft-boiled eggs. They don’t merchandise well on a salad bar, but they work in a package.”