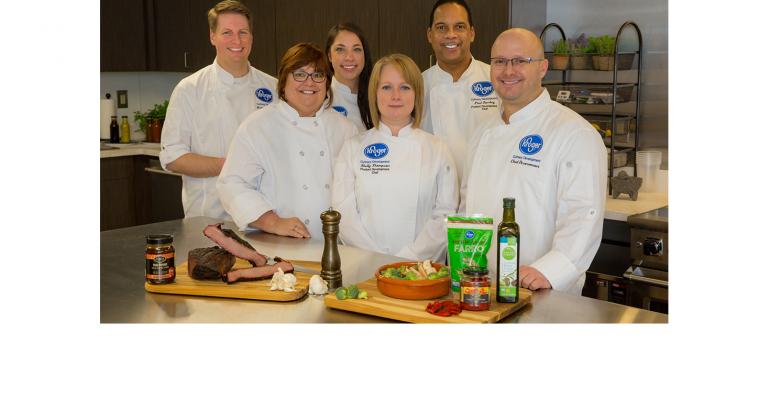 The Kroger Co. today debuted its Culinary Innovation Center, featuring a commercial kitchen with multiple cooking stations, spaces and capabilities, including technology that allows video streaming of educational sessions to Kroger associates across the country.

Kroger spent a reported $2.5 million remodeling the two-story brick building at 901 W. Elm St. in downtown Cincinnati, not far from its corporate headquarters, into the LEED-designed facility. Construction on the Center began in March 2017.

Private label development will figure heavily into the Culinary Innovation Center’s role in the company.

“The Our Brands (Kroger’s private-label portfolio) culinary team has a dedicated product development space at the Center,” Kristal Howard, head of corporate communications and media relations at Kroger, told Supermarket News. “While the Center is not open to the public, we will host private tasting events and focus groups,” she added.

“The Center gives our culinary team a fun, modern space to innovate and experiment with food trends, flavors and ingredients to create new experiences for our customers,” Hammer said.

Howard noted that Kroger will also use the test kitchen to explore new restaurant concepts and menu recipes.

In recent years, Kroger has been stepping up its foodservice game and testing out several new concepts and ideas near Cincinnati. In its Newport, Ky., Kroger Marketplace store, the company is testing a pizza concept brought over from its now-defunct Main and Vine store in Gig Harbor, Wash. The Newport store also houses an Eli’s BBQ that exists in two locations and a Chicken & Co. fried chicken counter that is in 10 locations.

Kroger has also stepped into the meal kit space with its own Prep + Pared brand.

When local TV station WCPO Channel 9 visited the Newport store this week, they found Kroger’s Prep + Pared meal kit offerings included up to 60 different options priced up to $20, with expiration dates five days into the future. The station did the math and calculated that in just that one store, the Prep + Pared case could generate $87,600 in sales. Multiplied across the chain’s 2,796 stores, it would be an additional $250 in annual revenue.

WCPO reported that Kroger has hired a roster of top-talent chefs over the past two years, including Jay Denham, who serves as general manager of Kitchen 1883. He has 16 years of restaurant industry experience, and won an award in 2017 for Red Hog, a Louisville restaurant that was one of Bon Appetit’s “Best New Restaurants in America.”

According to Chuck Cerankosky, managing director, equity research analyst and principal at Northcoast Research in Cleveland, many of Kroger’s newer flagship locations feature an expanded fresh food offering. “Kroger slices and dices so many merchandise offerings depending on where the store is, and they are getting better at their prepared foods offerings as well,” he said.

“With this next step, they can improve the quality and the breadth of cuisine in any culinary category, like Mexican or Italian,” he said. “Kroger has stores in all types of demographic categories and that means they have to be aware of the local ethnicities and willingness to spend extra on prepared foods.”

Kitchen 1883 also falls under the realm of R&D and product development at Kroger, Cerankosky said. “A restaurant affiliated with a supermarket is not a new idea, but we’re clearly seeing consumers gravitating to fresh foods, and they want quality. When they see all the fresh food in the store that they can buy and take home and prepare, they expect that to be the base of what they consume in the store, its restaurants, or take home and heat. They don’t want to be purchasing something they could have found at Long John Silver’s or Taco Bell.”

“Kroger has operated grocery stores since 1883; we know food,” said Howard. “People will always eat, but the way they eat will always change. Our new Center is one more tool we have to keep our pulse on customer trends and expand our foodie culture.”