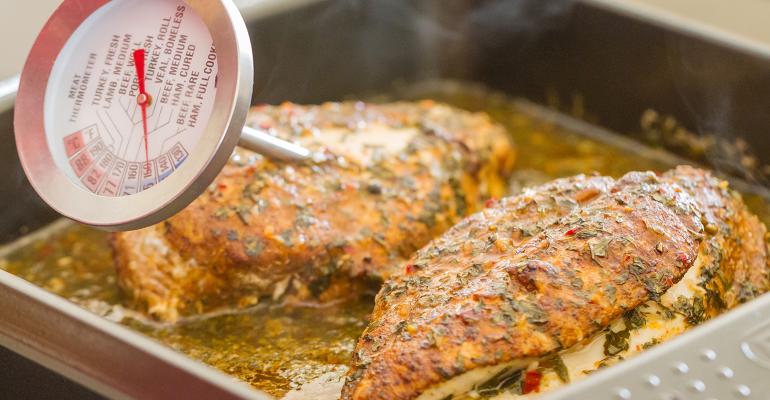 With ever improving food safety practices and greater ability to pinpoint issues that do occur, the supermarket industry might say the food their stores sell is safer than ever.

However, consumer perception of food safety at the supermarket has fallen in the past 10 years as the presence of prepared foods has grown, according to the NPD Group. The Port Washington, N.Y.-based researcher’s Food Safety Monitor found 58% of U.S consumers currently believe that food sold at supermarkets is safe, compared to 66% in 2006.

Restaurants typically rate lower; the percentage of consumers who say food sold at restaurants is safe has stayed, on average, between 47% and 49% in the past decade.

When it comes to supermarkets, an increase in negative perceptions around food safety has some basis in reality. A recent analysis by the Wall Street Journal found that “outbreaks linked to U.S. supermarkets more than doubled from 2014 to 2015,” with notable examples related to prepared foods.

As supermarkets start to act more like restaurants, there are certainly things the grocery industry can learn from its counterparts in foodservice, according to Neil Checketts, COO at Kneaders Bakery & Café, an Orem, Utah-based fast casual chain. Checketts was recently promoted from his role as VP of food safety and quality assurance. Prior to joining Kneaders, he was Walmart’s senior director of food safety.

“I have had a background on both sides, and I think that there are inherent things in the [restaurant] business that they do a little bit better, that the grocery store can learn from,” said Checketts.

He said some of the processes related to handling prepared foods need to come from the restaurant industry, as well as manufacturing.

At the same time, customers need to recognize their part in food safety, said Checketts, who has also worked as a health regulator.

“And one of the things you have to keep in mind is very few people in their homes have thermometers in their refrigerators. Very few people sanitize surfaces after they handle raw foods. So I think there becomes a very shared responsibility with all [parties].”

In addition, the fact that there are more recalls and outbreaks on the nightly news doesn’t mean that food safety has gone down, Checketts said.

“What the reality is — and I would say and there is evidence to support this — our rates of most of these illnesses and situations in restaurants and grocery stores is actually going down, from an overall perspective. What happens, though, is we’re getting more and more that are reported.”

Ultimately, even good companies may face a food safety incident. The most important thing is how they handle it, said Checketts.

“The good companies that have taken this seriously, what they will do is when an issue does occur they will have a plan that helps them mitigate and address the risk much faster than somebody who doesn’t.”