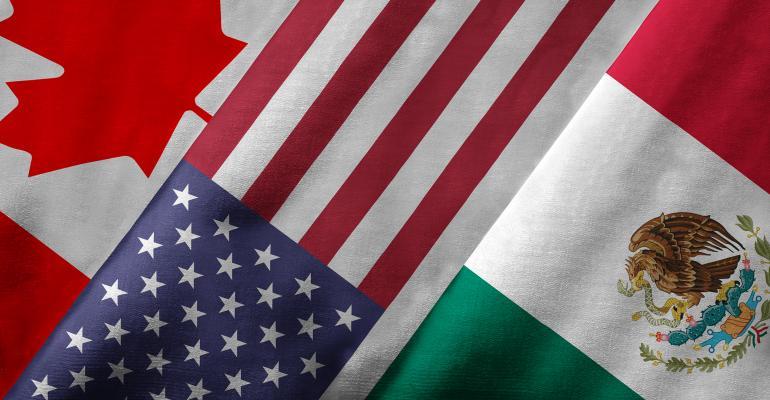 ronniechua/Getty Images
USMCA passage received praise from retail and agricultural groups after waiting for House action for 14 months since the trilateral deal was reached between Canada, Mexico and the U.S.
Issues & Trends

On Thursday, the House of Representatives voted 385-41 to pass the U.S.-Mexico-Canada Agreement (USMCA). The agreement will now go to the Senate for a vote, which Senate majority leader Mitch McConnell (R.-Ky.) said he would bring up once the Senate completes impeachment proceedings.

The passage received praise from agricultural groups and interests after waiting for House action for 14 months since the trilateral deal was reached between Canada, Mexico and the U.S. A week prior, House Democrats had reached an agreement with U.S. Trade Representative Robert Lighthizer and proceeded to get follow-up signatures with the Mexican and Canadian governments to address concerns over labor, the environment and pharmaceuticals.

“I’ve long said that support for USMCA crosses political parties, the bipartisan passage of the agreement today is proof of that,” Agriculture Secretary Sonny Perdue said in a statement following the vote. “I am pleased the House finally brought this agreement to a vote and encourage quick passage in the Senate. President [Donald] Trump delivered on his promise to replace NAFTA [the North American Free Trade Agreement], and USMCA is a huge success for America’s farmers and ranchers. This agreement will unleash the bounty of America’s agricultural harvest to two of our largest trading partners in the world, and it is critical to the success of rural America.”

All food and agricultural products that have zero tariffs under NAFTA will remain at zero tariffs. Since the original NAFTA did not eliminate all tariffs on agricultural trade between the U.S. and Canada, USMCA will create new market access opportunities for U.S. exports to Canada of dairy, poultry and eggs, and in exchange, the U.S. will provide new access to Canada for some dairy, peanut and a limited amount of sugar and sugar-containing products.

Earlier this year, nearly 1,000 American food and agricultural associations and companies announced their support for USMCA, and the National Association of State Departments of Agriculture signed a letter to congressional leaders urging them to ratify USMCA. In September, all former U.S. secretaries of agriculture since President Ronald Reagan’s Administration announced support for USMCA.

He added, “Passing the USMCA is of vital importance to the food retail industry. FMI will continue to work with House and Senate leadership to make sure the legislation crosses the finish line in 2020.”

America’s dairy farmers will have expanded market opportunities in Canada for a wide variety of dairy products. Canada agreed to eliminate the unfair Class 6 and 7 milk pricing programs that allowed their farmers to undersell U.S. producers. The U.S. Department of Agriculture said the agreement institutes a more rigorous process for establishing geographical indicators and lays out additional factors to be considered in determining whether a term is a common name, using a combination of approaches to protect the continued use of a number of generic cheese terms, such as parmesan and feta.

The U.S. Dairy Export Council (USDEC) and National Milk Producers Federation (NMPF) praised the House for approving USMCA. “USMCA will bring tangible benefits to the U.S. dairy industry by upgrading trade rules, opening the Canadian market to U.S. dairy exports and preserving our valuable market access in Mexico,” USDEC president and chief executive officer Tom Vilsack said. “Today’s bipartisan vote is indicative of the need to immediately secure these benefits for dairy and all of agriculture.”

U.S. Meat Export Federation (USMEF) president and CEO Dan Halstrom said, “Ratification of USMCA is an important step in solidifying trade relations with Mexico and Canada, which are critical destinations for U.S. pork, beef and lamb. This agreement will bolster the United States' position as a reliable supplier to two leading markets that currently account for about one-third of all U.S. red meat exports. We look forward to the Senate taking up this legislation as soon as possible and completing the ratification process.”

“Today was a crucial win for all U.S. beef producers and a reassurance that U.S. beef will continue to have duty-free access to Canada and Mexico," National Cattlemen’s Beef Assn. president Jennifer Houston said.

American Farm Bureau Federation president Zippy Duvall said this trade agreement could not come at a more critical time for U.S. agriculture. “Farmers and ranchers have been hit with a perfect storm of low commodity prices, weather disasters, trade disruptions and a severe downturn in the farm economy. The USMCA will provide continuity in the growth of the North American market and will strengthen our trading relationships with Canada and Mexico, which are our number-one and number-two export markets, respectively,” Duvall said.

“We are hopeful that USMCA can be a model for future U.S. trade agreements, as these modernized rules will be a strong guide for addressing continuing issues. We urge the Senate to quickly approve the USMCA,” Duvall said.