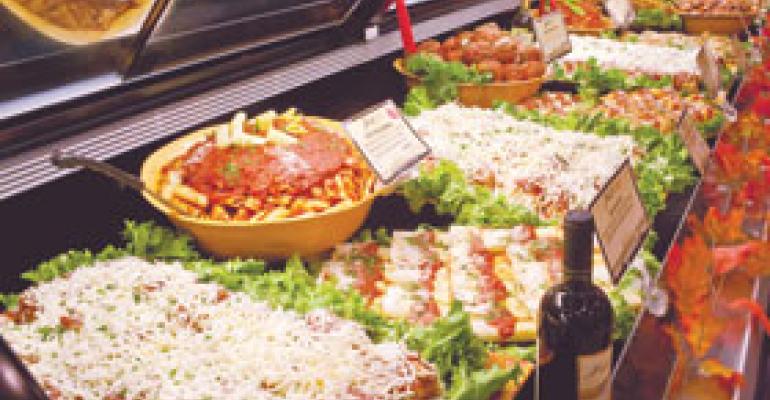 Joseph’s Classic Market is not a supermarket. Its owner makes that clear, but the fresh prepared food business at Joseph’s three Italian specialty stores could stir envy in the hearts of retailers everywhere.

Residents in the affluent Palm Beach area of Florida have said that Joseph’s is the best thing that has happened to this area in years.

When people retire to Florida, or even spend half the year there, they often miss favorite foods they were able to buy back home.

“People tell me when they come into one of my stores that they feel as if they’re back home, wherever that might be — New York, Boston, Chicago,” owner Joseph Acierno told SN.

“A lot of people who move down here come from the big cities, and they’re used to being able to get what they want easily.”

The atmosphere at all of Acierno’s stores is cheerful. With Italian music playing in the background, associates engage customers. They’re friendly. In fact, excellent customer service sits right at the top of Acierno’s priority list.

But most of all, there are the coveted products. Lasagna like mother and grandmother used to make, fresh-baked rugelach, New York style cheesecake, prosciutto bread. A whole menu of familiar comfort foods warms customers’ hearts and whets their appetites.

“There was a need for our kinds of quality products, specialty pastas and other items I import, and especially for really top-quality meals made fresh everyday right here,” Acierno said.

Locals don’t want to cook every day, nor do they want to eat out all the time.

“I saw a wide open market for what we can offer,” Acierno said.

That’s what propelled him into business here, but there was a bonus, too. His flagship store lies no more than five minutes away from the ocean. And his stores, all three of them, are just a few miles away from some of the most productive farmland in the country. Buying seafood, produce and other items direct has helped drive the success of Joseph’s Classic Market. It keeps costs down, enabling the company to provide top-quality meals at value prices.

With no middlemen, Acierno not only trims his costs, but is able to underscore freshness.

“We have a license to buy from local fishermen. We get snapper and grouper, whatever they’re catching, and we buy direct from a lot of farmers. We don’t have warehouses.”

Acierno wouldn’t disclose sales figures or discuss the volume of lasagna he sells, but the fact that the prepared food programs at his three stores can boast 25% to 50% increases in sales each year speaks for itself, as does the company’s recent expansion, and plans for more.

“I want to open more locations in the next couple of years, not more than an hour and a half away from [Palm Beach Gardens].”

When he opened his first Florida store in 2006, it was in a 7,500-square-foot space in Palm Beach Gardens, but just this year, he moved that location across the street to a building that provides him with 25,000 square feet of selling space, and a 10,000-square-foot kitchen.

“I bought the building. It’s on a site that used to be an Albertsons. We do all our cooking there. For that store, and for our smaller stores in Wellington and Boca Raton.”

Even though it offers a huge variety, the daily menu sticks to standard, tried-and-true fare, Acierno points out. “There’s nothing unidentifiable. No vegan dishes. No experiments. When you compare our prepared foods to Whole Foods’ and Fresh Market’s, you’ll see we stayed with the classics.”

He points to towering lasagna made with the best ingredients he can find — including fresh pasta made in the store’s kitchen — “just like my grandmother made at home.” Meatballs and other dishes are almost all made from family recipes, and Acierno allows no shortcuts. He makes that clear to his culinary team. His wife, Amy, makes the meatballs by hand.

Other familiar dishes like chicken parm and chicken marsala, different types of pasta and baked salmon stand out in the prep food case. “We just keep making the things that have a good sales history, things we know people like.”

The menu stays the same, but at least one unique special is featured every evening.

“For instance, last night we had brisket. The Jewish holidays are coming up, so we’ll have brisket and matzo ball soup and other items we don’t always offer.

To minimize shrink, Acierno runs the prepared food program as he would a restaurant.

“We cook to order. Not actually as the person orders, but we cook throughout the day as needed. I have 25 guys in the kitchen, seven of them executive chefs, cooking from 8 to 8.”

As one item sells down, his culinary team makes more of it, and continually replenishes the prepared food case.

Acierno has been in the food business all his life, but that was in New York and New Jersey. Before Florida, his last Italian Specialty Shop, as he calls all his stores, was in Staten Island, N.Y.

“I grew up in the food business. I’ve never worked outside the business. My father had a butcher shop, which evolved into offering more products. We added deli and bakery. People were getting used to one-stop shopping.”

And that indeed is what Acierno has brought to Florida, a taste of Italy with a touch of New York.

Take the stores’ butcher shops, for example. While prepared food makes up 25% of total store sales, fresh meat also accounts for almost that much of the total.

“Meat is our forte. We buy direct from the plant, the old-fashioned way, and we have 30 butchers, cutting meat in-store.”

“We’re licensed to sell Certified Angus beef, beef that’s served at the nation’s finest restaurants. When the recession started, people began avoiding restaurants, but they didn’t give up quality,” Acierno said. He said they knew they could buy a top-quality steak from him and all the sides they wanted for a fraction of what they’d have to pay in a restaurant.

“People like our old-fashioned way of doing things,” Acierno said. “How many places can you get a double-cut pork chop, or your steak cut to order? We cut all the meat in-house.”

The service, the atmosphere and the company’s prepared food specialties have helped it persevere during the down economy.

“We did all right during the recession. We had what people were looking for.”

Sitting near a huge number of restaurants, many of which have since closed, each of Joseph’s Classic Market stores held its own easily.

“In fact, we were busier than usual during the recession. Just think about pasta alone. If you went to an Italian restaurant, a dinner and wine would cost you $25. Here, it’s $8,” Acierno said.

That’s just one example. One that customer and Palm Beach Gardens resident Wayne Williamson comments on is an ongoing special gourmet dinner for two for $14.99.

“My wife and I moved down her three years ago, and immediately our neighbors and friends told us if we were looking for a really nice deli and supermarket, we should go to Joseph’s. We did and we fell in love with it,” said Williamson, a lifelong veteran of the food industry.

Williamson said he’s not surprised that Joseph’s has such good prepared food and inventory turnover, because people love to shop there.

“I was there the other morning and one of the associates at the meals counter suggested I stop by at the in-store bakery because they had just made broccoli rabe bread and eggplant bread. My first thought was I should have taken a bigger cart. I did buy some of the bread and some rugelach, too,” Williamson said. “Those little surprises make shopping there fun.

“I’m going back tonight for chicken marsala. Typical shoppers like me are there two and three times a week, sometimes twice a day. Joseph is making European-style shoppers out of all of us.”

When Acierno set up business in Palm Beach Gardens five years ago, he made sure that word of mouth would be a big factor in growing his business.

“I held a New York-style block party. After doing a send-off with ads in local newspapers and on radio, we staged a party — after getting a permit from the town — and had what seemed like our own festival,” Acierno said.

“We were cooking sausage and giving away lots and lots of food. There were about 3,000 people there, and we gave away 1,000 pounds of sausage, 500 pounds of lasagna, 500 pounds of eggplant and at least 2,000 mini cannoli, among other things. We wanted people to taste everything we had.”

It worked. Business took off at a satisfying clip almost immediately, and a little over a year later, Acierno opened his second store.

Williamson said his favorite department is prepared foods, “because it’s always fresh and there’s so much variety.” Deli and cheese and meat are tops, too, he added.

While Joseph’s doesn’t carry many center aisle staples such as paper towels or dog food, the stores do have small dry grocery sections.

“We import a lot of specialty items, sauces for instance, from Italy, and 30 of our grocery items are sold under our private label, Joseph’s Classics.”

The future for the concept he has nourished here is bright, Acierno told SN.

“I could open a business next door to a traditional supermarket and do just fine, because I’m not going nose to nose with grocery. I’m going to grow, using my own strengths — perishables and excellent customer service.”