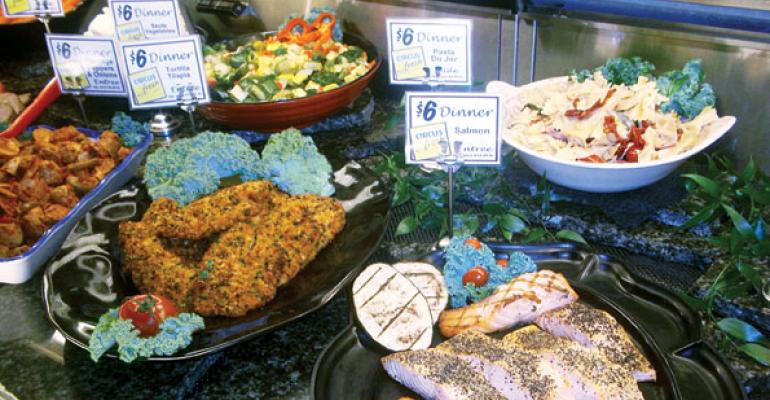 After honing their prepared food programs to a competitive edge, retailers now are ramping up unique concepts and promotions to draw new interest

Many prepared food departments have earned a reputation for restaurant-quality food, but competition has been heating up lately between supermarkets and the foodservice industry. To keep pace, many grocers are emphasizing specialties and sometimes borrowing directly from the latest restaurant trends and popular promotions.

Some of the big-draw events have been around for a while — in fact, they may be long-time traditions like Thibodaux, La.-based Rouses’ crawfish boils. It’s just that they’re getting more emphasis these days.

Others are new, like the Vietnamese take-out restaurant at Kowalksi’s Markets, St. Paul, Minn.

“The green lights [overhead] and the uniforms certainly are attention-getters … People wander over to see what’s going on,” said Terri Bennis, the nine-unit independent’s vice president of fresh food operations.

And when shoppers wander over to the Vietnamese restaurant, they see what else the prepared food department has to offer, including a popular panini station where customers line up at lunchtime. 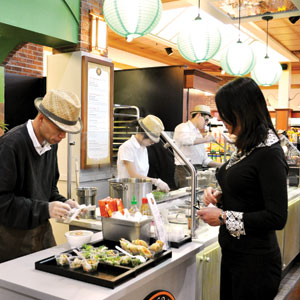 “So well, in fact, that we’re looking to put it into another location.”

Rouses, too, added a Vietnamese pho bar in a store

it opened last fall in downtown New Orleans, but the big differentiator at Rouses is its flamboyant presentation of local seafood. Boiled or grilled right before the customers’ very eyes, it’s hard to miss.

“We have a big outdoor boiling rig that we use for festivals, like the upcoming French Quarter Festival, which attracts 400,000 visitors,” said Jack Treuting, Rouses’ executive director of culinary operations.

“We boil over 30,000 pounds of crawfish just for the French Quarter Festival, and sponsor our own Crawfish Eating Contest.” 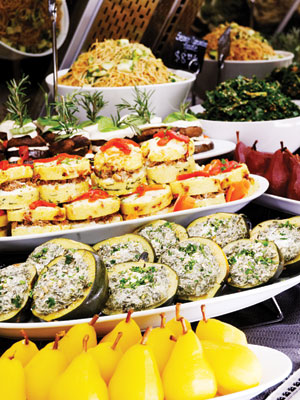 Rouses has always worked with its local communities, helping charities and schools, but recently they’re making themselves known farther afield with events that spotlight their prepared foods.

“We are doing a lot more onsite cooking at events across South Louisiana and the Mississippi Gulf Coast. For Saints games at the Superdome, we shuck and grill oysters, and serve jambalaya, and our own grilled hamburgers, sausage and boudin,” Treuting added.

The community and charity events Rouses participates in helps keep them in the know about what’s going on in the restaurant world and the food world in general, Treuting pointed out.

“It lets us rub elbows with some of the city’s best chefs at some of the coolest events, and keeps us abreast of all the local trends.”

At Super Foodtown stores, owned by Food Circus, Middletown, N.J., Chef James Conroy has adopted some ideas from the restaurant business to get customers’ attention. The most important, probably, was his decision to offer a plate of food substitutions definitely allowed for a particular price at the chef’s service hot case. He’s not the first retailer to serve up a hot plate, entrée and two sides, for $6, but he’s making very sure customers know about the promotion.

This past year, Conroy has had special signs designed to call attention the $6 hot meals, and he has placed the signs all over the place — throughout the service case, up front, and hanging from the ceiling.

“I decided last year we weren’t going to re-invent the wheel. What we did was just pull back and focus on what we do really well, and tell customers about it.”

One-on-one sampling at the chef’s case is now an all-the-time thing.

“I’ve told our associates to ask customers what they’d like to taste.”

Conroy said he knows customers put a high value on fresh, too, and plating up a meal virtually just off the stove is one way to underscore the freshness of his menu items.

“It’s as fresh as it can be. From oven to customer, an entrée and two sides like Boston Market does so well,” said Conroy, who is a veteran of the restaurant and hotel industry.

“Sometimes we run a special on those $6 dinners and advertise two for $10.”

Conroy also offers a variety of plated meals in the self-service case as well. In fact, with new square packaging that shows off the meal to best advantage, he has tried some small portion meals. They’ve been selling well, he said.

“People like salmon, but it’s expensive — $14.99 a pound. But I take a couple of small slices of grilled salmon, colorful vegetables, and a garnish, and retail the meal for under $4. We sell a lot of those. Our customer base includes a lot of older people, retirees. They’ve said they want smaller portions, and the price is attractive.”

Market Street United, an upscale banner of Lubbock, Texas-based United Supermarkets, has also brought more attention to its prepared foods with meals priced by the plate.

“We are having great success with our Create A Plate concept out of our Chef’s Showcase,” said Diane Earl, United’s deli/foodservice director.

That program is similar to Conroy’s new program at Super Foodtown in that it suggests customers choose an entree and two sides served right from the hot case. The across-the-board retail: $6.99 a plate. Like Conroy’s program, the choice is big, not limited to one or two different entrees.

A lot of retailers have borrowed ideas from the foodservice industry. Making small batches at a time and selling by the plate are some adaptations from the restaurant world, and Earl at United said that she got the idea for some interesting chili-pepper-laced sauces from restaurants.

Rouses has taken its relationship to restaurant-style prep foods a step further.

“We decided to really focus on the idea that our food service areas were like mini restaurants and then went out and hired some of the best of these cooks from the local restaurants and hotels,” said Treuting.

“We really like to think of our prepared food department as a restaurant within our store. We’re always adjusting our menus to take advantage of local, seasonal offerings. We try to follow local and regional culinary trends, and we’ve included in some stores a la minute offerings like the Vietnamese pho bar and a burrito station that satisfy a growing lunch business. Both of those are hugely successful.”

To accommodate a growing lunch business, Rouses is offering additional seating in every new store and as part of every remodel.

Even with its concentration on and promotion of restaurant-style meals, Rouses doesn’t neglect its grab-and-go section.

“We also offer family-size meal solutions in the grab-and-go area that allow the customer to choose between family sizes of two and four people,” Treuting said. “These are easy and flexible and can continue to provide many options as the seasons change.”

Seasonal changes and lots of variety on the menu are very important, retailers told SN.

In fact, Bennis at Kowalski’s insists that constantly adding variety to all prepared food programs is absolutely the key to keeping sales growing, because it keeps customers interested. The company is always on top of things with seasonal changes, too.

Variety has been key to the success of Kowalski’s panini program, Bennis said.

“While we have five that are top sellers, we also have 12 to 15 varieties to choose from. We have to keep it interesting.”

Variety and quick service that keeps the lunchtime line moving have racked up double-digit sales increases for the panini program over the last two years, and sales are continuing at that pace, Bennis said.

Aware that customers are increasingly health conscious, Kowalski’s is “transitioning to lighter dishes,” in both its hot and chilled prepared food.

Recent research indicates that consumers are looking more than ever for fresh and healthful food.

A Mintel foodservice study released last week revealed that a total of 89% respondents said that “fresh” is the menu description that most interests them. Women and those aged 55 to 64 showed the most interest in “fresh.”

The “2012 Dining Out Report: A Look Ahead,” conducted by the Chicago-based consumer research firm, also showed that 71% said “made from scratch” was what interested them most. “Real” came in third with 67% saying that was the most important menu descriptor to them.

That bodes well for supermarkets’ prepared food directors who have found new ways to attract customers and to emphasize — as those quoted here have — the freshness of their store-prepared fare.