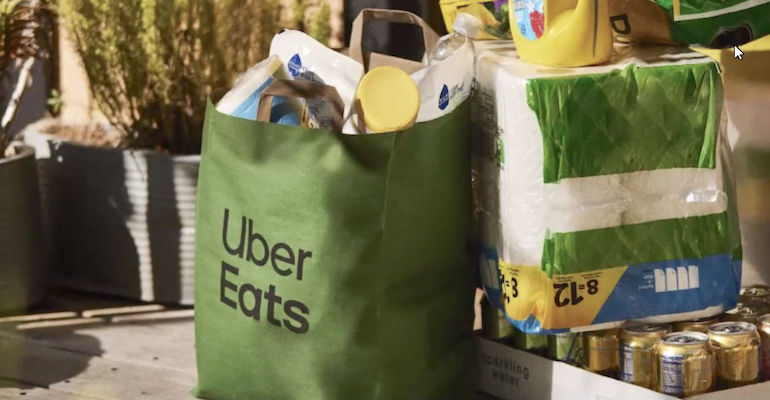 Uber Eats
Plans call for the updated Uber Eats grocery platform — with new capabilities for customers, personal shoppers and retailers — to start rolling out to selected cities next week and continue through the summer.
News>Online Retail

Ride-share giant Uber made its foray into the online grocery arena in October 2019 with an agreement to acquire majority ownership of Santiago, Chile-based Cornershop, an e-grocery delivery startup serving several international markets. Less than a year later, Uber leveraged the Cornershop investment and its restaurant delivery footprint with Uber Eats to enter the U.S. online grocery delivery space. 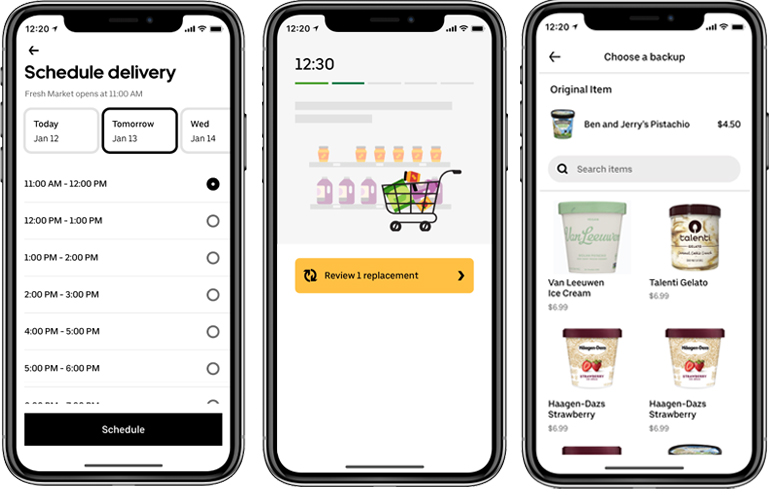 “We launched groceries on [Uber] Eats in July 2020 in the U.S., in partnership with Cornershop, and the combined Uber-Cornershop grocery business is now at a $4.5 billion run rate, delivering millions of products from retailers around the world,” said Oskar Hjertonsson, global head of grocery at Uber and co-founder of Cornershop. “We have worked for the past two years with hundreds of engineers and product experts to bring the best of Cornershop’s products and our expertise, connecting it with Uber’s best-in-class technology and on-demand logistics. Then the idea was making it equally easy and seamless to order groceries inside Eats as ordering from your favorite restaurant. Today, we’re unveiling a fresh, new grocery experience. It is by far our most comprehensive update yet, and it gets us a big step closer to our goal.”

Among the key new Uber Eats grocery features, outlined in a media videoconference on Thursday, is the ability to place orders whether stores are open or closed. Items ordered after hours are delivered in the first available window or scheduled at the customer’s convenience.

“Uber has always been known for convenience — tap a button, get a ride, or get your food whenever you’re hungry. So our focus on that has made it possible for consumers to now also get their groceries on their own time, because we know life doesn’t really happen on a schedule,” Therese Lim, senior director of grocery and new verticals product at Uber Eats, said in the press event.

“This is directly coming from consumer feedback. Consumers told us this was a major priority, to be able to shop on their own time. Currently, when consumers place order on Uber Eats, they can only shop on the stores are open, which if you think about is a bit counterintuitive, especially for grocery delivery. The times when stores are open tend to be when consumers are also busy with work or school, and they just don’t have time to shop. This sort of future we call ‘closed-door shopping,’” Lim explained. “We’re just opening up access for consumers to be able to build their carts and order at any time of the day to better fit their schedules.”

With live order tracking, consumers will be able to monitor the shopping and delivery experience every step of the way, according to Uber. Now, as personal shoppers scan and add each item to the cart, pay for the order at checkout and go on their way for delivery, customers will be updated on the status of their grocery order. 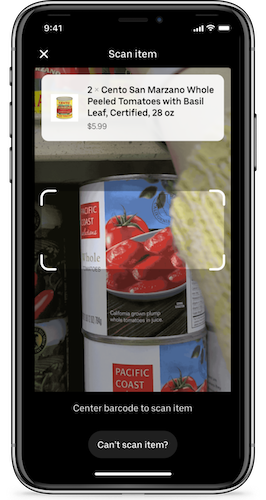 “For frequent Eats users, this is going to feel like a natural extension of the order tracking you already know in love, but it’s going to be supercharged because it’s much more granular. You can almost see items being taken off the shelf and put into the shopping cart inside the store,” Lim said. “For additional peace of mind, we’ve also introduced barcode scanning for [personal] shoppers inside the store. It allows shoppers to scan the item that they’re picking off the shelf with their phone. So [customers] will know it’s actually the cereal you wanted.”

Lim noted that the shopper scanning capability also dovetails with quicker and easier product replacements, since customers can track what’s going into the cart.

“From now on, if for any reason an item is out of stock, we’re going to make it easier for you to choose the next best thing. So while you’re composing your grocery cart or convenience order on the app, you can proactively provide your shopper with your next preferred item,” she said, adding that customers also can let the Eats shopper determine the best match. “This kind of control feels really small, but what we’ve heard from consumer feedback is that this specificity is incredibly important, because they don’t want to not be able to predict what they’re going to get in their shopping bag when it shows up at their door.”

Customers, too, now can shop for fresh foods just as they’ve picked them out of the bin or from the display case.

“We’re also introducing the ability for consumers to shop for more items inside a grocery store, specifically items priced by weight,” said Lim. “This is a very foundational feature that just makes our grocery product work exactly like a grocery store you’d visit in real life, where you can buy steak by the pound or a box of cherries by the pound, etc.”

“The benefits of this refresh are not just for consumers. Merchant partners and couriers can look forward to improved product catalogs, real-time inventory management and a much stronger support function for all kinds of issues that arise,” he said. “Of course, we’re an earner-obsessed company, and we bring with this brand-new earnings opportunity to couriers that can now shop or pick, pack and deliver items from any one of our grocery partners. So it’s really a huge milestone for the combined Cornershop and Uber families.”

Currently, Uber Eats and Cornership online grocery delivery services are offered via 24,000 grocery stores in 33 countries, including from Albertsons Cos. and Costco Wholesale in the United States and Carrefour and Woolworths internationally.

In early May, Albertsons announced the rollout Uber Eats delivery to another 800-plus stores in six states, expanding the service to over 2,000 stores. Later in May, value grocer Grocery Outlet unveiled a pilot of same-day delivery via Uber Eats at 72 stores in six states. This year, Smart & Final also expanded its on-demand and scheduled grocery delivery to customers through Uber and Uber Eats. Also earlier this year, Uber Eats landed its first convenience retailer in a delivery partnership with convenience/fuel operator BP from selected locations in parts of the United States and globally.

“We’ve already seen incredible demand from both consumers as well as grocery partners, and we’re signing new deals weekly with leading grocers around the world,” Hjertonsson said. “This fresh, new product experience will allow us to better fulfill demand for reliable, convenient and easy grocery [shopping] and doing it at an Uber scale. We are betting in a huge way on grocery, and I believe that with our massive global brand, our 100 million-plus active user base and logistics network, along with our product and engineering muscle, we’re in a great position to build a great grocery business in the U.S. and around the globe.”