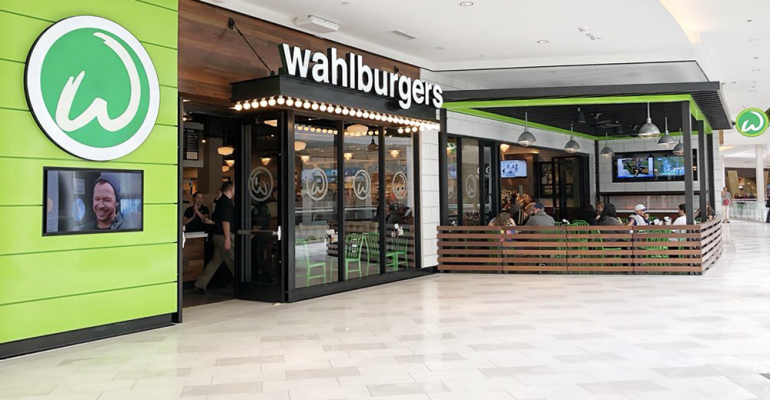 Hy-Vee's first Wahlburgers location opened in May at the Mall of America in Bloomington, Minn.
Product Categories>Prepared Foods

Double Wahlburgers coming up for Hy-Vee

Following up the spring debut of its first Wahlburgers restaurant, Hy-Vee Inc. plans to open a pair of new franchise locations this month.

Related: Hy-Vee to open its first Wahlburgers this month

Wahlburgers restaurants serve up a menu of signature burgers, homestyle side dishes and house-made condiments, as well as fish, chicken and vegetarian options plus a full bar with specialty drinks, such as adult frappes and floats.

Details on special events at the restaurants’ openings are upcoming. But Hy-Vee said that, at a later date, it plans to hold an official grand opening for the West Des Moines Wahlburgers that will feature appearances by celebrity brothers Mark and Donnie Wahlberg. Also appearing will be executive chef Paul Wahlberg, who with his famous brothers and other investors founded the restaurant chain in 2011.

“With the opening on Sept. 11, a national day of remembrance, we plan to host local first responders as some of our first guests,” according to Brett Bremser, executive vice president and chief merchandising officer for Hy-Vee, which operates 245 retail stores in eight states.

Hy-Vee announced in August 2017 that it planned to build, own and operate 26 Wahlburgers locations, which would make it the restaurant chain’s largest franchisee. The grocer opened its first Wahlburgers, a 5,500-square-foot location, on May 22 at the Mall of America in Bloomington, Minn.

“Hy-Vee is excited to open our third Wahlburgers restaurant and offer a unique dining experience to the Kansas City metro area,” Nate Stewart, executive vice president of perishables for Hy-Vee, commented on the Olathe location. “Families will have the opportunity to eat delicious food in a fun atmosphere when they visit Wahlburgers.”

Hy-Vee also is adding Wahlburgers-branded menu items to its more than 80 Market Grille in-store restaurants. Wahlburgers and partner ARKK Food Co., too, have rolled out Wahlburgers At Home — a line of beef products, including ground beef, patties, sliders and brick packs — to more than 1,300 grocery stores in 26 states and the District of Columbia, such as Hy-Vee, Jewel-Osco, Acme, Safeway, Shaws and Winn-Dixie.