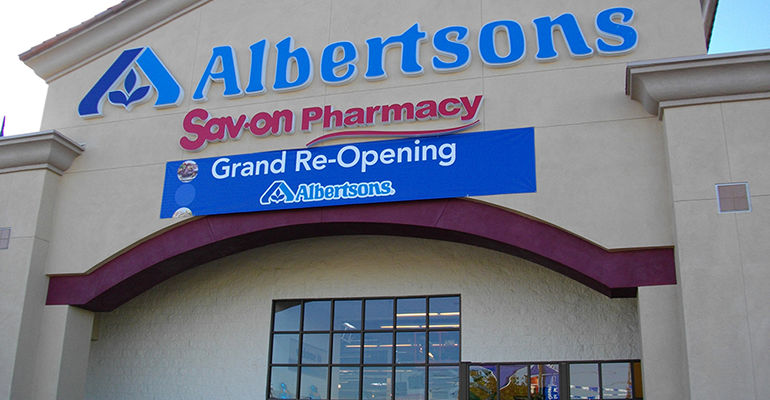 After failed merger, what's next for Albertsons and Rite Aid?

Unless other transformative deals — or ideas — are on the horizon, disengaged merger partners Albertsons Cos. and Rite Aid Corp. will have to go it alone with strategic plans already in place, industry analysts say.

Albertsons and Rite Aid last week canceled their nearly six-month-old merger agreement. The move came on the night before Rite Aid shareholders were scheduled to vote on the transaction, in which the drug chain would have been acquired by the supermarket retailer in a deal valued at $24 billion.

The companies said they terminated the deal because of opposition by individual and institutional shareholders and a thumbs-down from leading proxy advisory firms. Opponents claimed the deal didn’t offer Rite Aid shareholders a real premium or a fair stake in the combined company.

“I talked to some people in the investment community, and they felt that the arrangement negotiated just wasn’t fair and realistic given their assessment of Rite Aid’s assets. So it was kind of an investor revolt in the short term,” said Bill Bishop, chief architect at Brick Meets Click. “It was one of those instances where when things start to come apart, they really come apart.”

The transaction would have paired the nation’s second-largest supermarket operator with its third-largest drug chain, creating a company with sales of about $83 billion and 4,900 stores, 4,350 pharmacies and 320 in-store health clinics across 38 states and Washington, D.C.

Despite recommending that Rite Aid shareholders vote against the merger, proxy advisors Institutional Shareholder Services and Glass Lewis said the strategic rationale was sound, even if investors believed better options were available.

“I was surprised,” Scott Mushkin, managing director of consumer research at Wolfe Research, said of the decision to call off the deal. “Rite Aid has been sitting for sale for some time and sold almost half of its stores to Walgreens. The economics of the drugstore business are not great. We’ve seen that with Walgreens and with CVS. But now with Rite Aid, you have this subscale, Northeastern and Western chain. I think they were counting on merging with Albertsons.”

Albertsons and Rite Aid sought to boost their scale, extend their geographic reach and create more synergies to better compete against larger, better-capitalized rivals — including Walmart, Kroger and Costco for Albertsons and Walgreens Boots Alliance and CVS Health for Rite Aid. Both Albertsons and Rite Aid also aimed to better position themselves against online retail giant Amazon, which acquired Whole Foods Markets in August 2017 and online pharmacy PillPack in June.

“The merger with Albertsons would have provided Rite Aid the opportunity to gain scale and reduce its reliance on purely drug sales, which due to reimbursement pressures has been hurting margins. It has also lost the opportunity to use increased scale to help facilitate drug purchasing efficiencies,” Mickey Chadha, vice president and senior credit officer at Moody’s Investors Service, said in a report on the terminated merger.

“The combination of Albertsons and Rite Aid would also have resulted in an enhanced pharmacy network for Rite Aid on the West Coast and Northeast, which would have helped its pharmacy benefit manager EnvisionRx in contract negotiations,” he explained. “Together, the two could have offered discounts to customers who agree to use preferred or restricted pharmacy networks, which would incentivize consumers to use Rite Aid pharmacies.”

Both Mushkin and Bishop noted that the Albertsons-Rite Aid combination would have had some solid leaders in place to help the deal succeed. John Standley, chairman and CEO of Camp Hill, Pa.-based Rite Aid, was slated to be the chief executive of the merged company.

“John Standley is a good, smart executive. If anybody could have brought those two assets together and made something better out of them, it would have been him and his team,” Mushkin said.

Jim Donald, president and chief operating officer of Boise, Idaho-based Albertsons Cos., also would have been a key enabler, according to Bishop. Albertsons has said the merger presented $375 million in cost synergies and $3.6 billion in sales opportunities.

“He’s an excellent executive,” Bishop said of Donald. “That made the ability to capture synergies between two somewhat lagging companies much more of a reality.”

Even without Rite Aid, Albertsons still has a full plate of strategic initiatives under way. The integration of Safeway stores is going as planned, the company said, and its e-commerce business is growing, with sales jumping 108% in the first quarter.

Albertsons offers Instacart online grocery delivery in about 1,800 stores now and plans to make the service available in 2,000 stores by the close of 2018. The retailer aims to have its Drive Up & Go click-and-collect service at 500 stores by the year’s end. And its Plated meal kit subsidiary has products in 250 stores and is slated to have kits in hundreds of stores by the end of the year.

Bishop said the digital marketplace that Albertsons recently launched for vendors also shows much promise. “One of the things that is distinctive with Albertsons is their marketplace. I think they have a core of inspiration in the digital area. There is capability within the organization for innovation.”

“They’ve been expanding their home delivery business, which is something that doesn’t get talked about enough. They’re actually ahead of the likes of Kroger on that in markets where they compete and are certainly on par with Ahold’s Peapod. And they’ve done a decent job in their perishables area and have cleaned up their stores. Bob Miller and his team are old supermarket guys; they know how to run a good store,” Mushkin said. “That’s the good stuff. But the bad stuff, unfortunately, is pretty bad.”

He noted that Albertsons’ pricing is “not even close to near the market,” and the company hasn’t put enough capital into its stores and must service a high debt load. “That’s a challenge. They’re levered up, their prices are too high and they’ve underinvested in their assets,” he said.

Prior to its aborted merger with Walgreens in June 2017, Rite Aid had focused on building up its health care assets, which besides its pharmacies include RediClinic health clinics; Health Dialog, which provides health coaching and population health management services; and PBM EnvisionRx. The drug chain also remodeled most of its store base to the successful Wellness format, which generates higher same-store prescription counts and front-end sales than its other stores.

Those efforts continue, but Rite Aid faces the problem of scale. After the regulators nixed the merger with Walgreens, Rite Aid sold the company 1,932 stores, or about 40% of its store base. That left Rite Aid with about 2,530 stores, concentrated in California and Pennsylvania (over 500 stores each), New York (over 300 stores) and Michigan (nearly 300 stores). Most of its locations are now on the West Coast and in the Northeast.

“I think Rite Aid is in a tougher situation because the whole area of pharmaceuticals is in a period of rapid change,” Bishop said. “The whole notion of where we get our prescription drugs, what the prices are for those drugs, and what’s the importance of scale in the procurement of those drugs raises more questions for Rite Aid.”

“It seemed like it was going to happen. Now it’s off,” he said. “Maybe it wasn’t a perfect match. Each company had big problems, and maybe coming together didn’t solve them completely. But certainly apart, it’s not obvious what they do.”