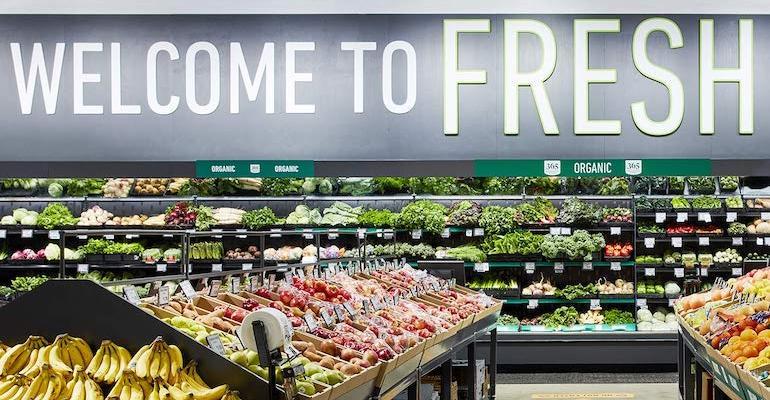 Amazon Fresh
Amazon Fresh has quickly ramped up to 15 locations and its hybrid online/in-store model is one that traditional grocery retailers are paying attention to.
News>Retail & Financial

In an SN webinar, analysts examine retailer’s strategies on real estate, pricing and more, and how supermarkets can compete

Since its dramatic entry into the grocery market with its acquisition of Whole Foods in 2017, retailers have watched carefully as Amazon has continued to grow its grocery business both online and in brick-and-mortar. Its online grocery offering has proven to be a huge force, one that exploded during the pandemic in 2020. On the brick-and-mortar side, Amazon’s Whole Foods continues to be an industry leader with more than 500 stores, and the combination of technology and convenience at its burgeoning Amazon Go chain has proven to be another strong component of its food retail success.

More recently, Amazon has embarked on a new supermarket concept, Amazon Fresh, which opened its first U.S. store one year ago this month. A high-tech supermarket with a focus on fresh food, Amazon Fresh has quickly ramped up to 15 locations and its hybrid online/in-store model is one that traditional grocery retailers are paying attention to. Originally located mainly in Illinois and California, Amazon Fresh has been expanding to other markets and there are reports that the company is eyeing up to 28 locations in the near future.

During a recent Supermarket News webinar on Amazon Fresh, we were joined by three highly respected analysts and thought leaders in the grocery retail space, who shared their insights:

• Bill Bishop, chief architect and co-founder of Brick Meets Click. Bill has been involved in research and consulting for several decades with a concentration on the new issues, competitors and developments impacting the grocery retail business.

• Patrick Fisher, a retail industry analyst and consultant formerly of Nielsen and Lidl US, with extensive experience in category management, pricing and buying for grocery retailers.

Click here for the full on-demand presentation of the “Grocery & The Amazon Threat” webinar.

During his research on Amazon Fresh, grocery real estate guru Lou Scudere visited three recently opened stores in the Chicagoland area and came to the conclusion that the focus of Amazon Fresh, despite its gleaming new stores, is on curbside pickup and delivery.

“Based on my walkthrough of these stores, I am convinced that for the moment, Amazon is not concerned with luring customers in off the street,” he said. “The reason I say that is the fact that during each store visit, for every single store customer off the street that was walking the aisles, which weren't many, there were three to five Amazon associates filling buggies with orders.” 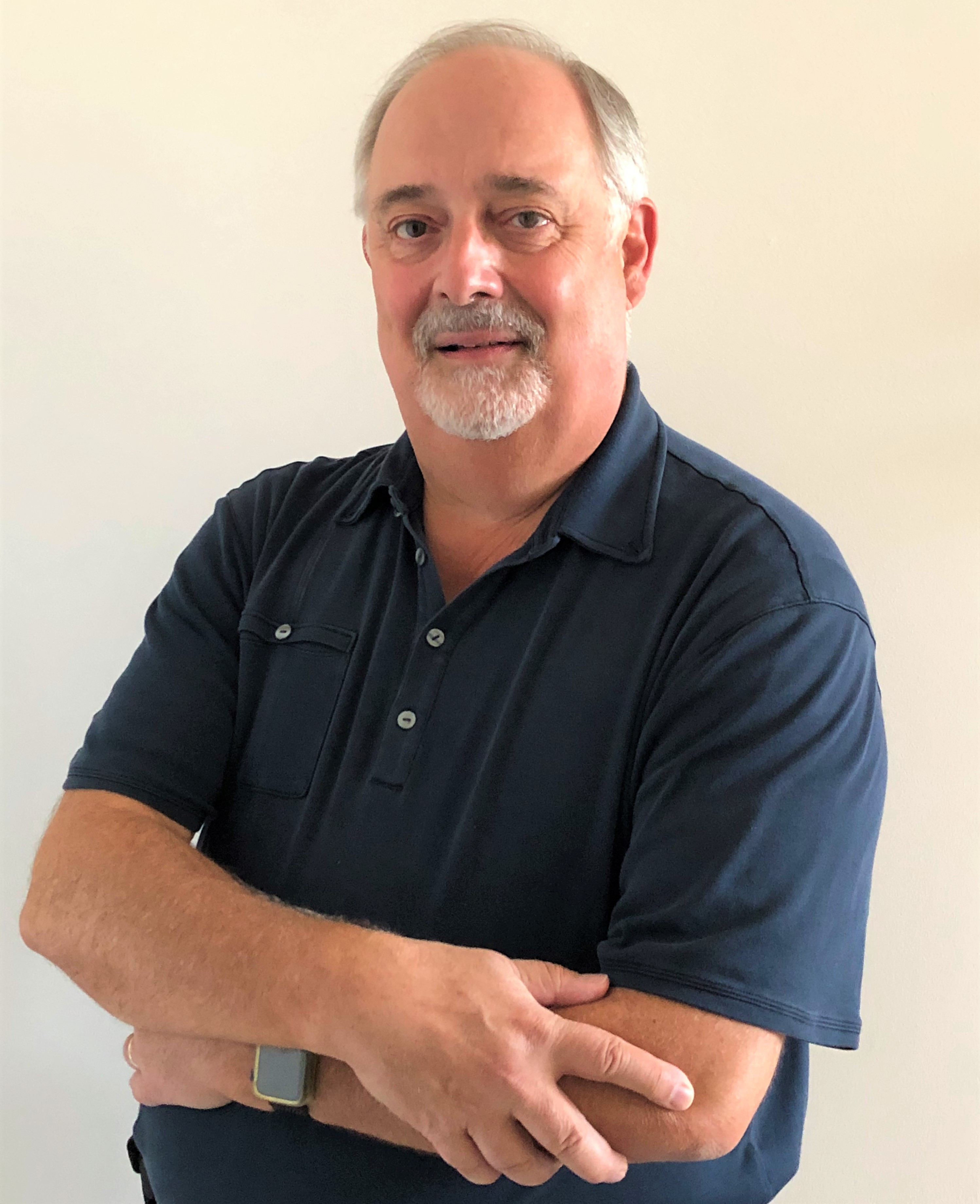 It makes sense that Amazon Fresh stores emerged during the pandemic, Scudere (left) suggested, noting that “to their credit, Amazon quickly realized that their Whole Foods store network was not sufficiently robust to provide for adequate geographic coverage to satisfy consumer demand and exploding grocery e-commerce. Thus, Amazon needed a real estate strategy, which could be rolled out quickly, to level the playing field.”

Addressing the elephant in the room — when does Amazon Fresh become a threat? — Scudere was reassuring. “The short answer, in my opinion, is not yet. In my opinion, the present initiative by Amazon is in essence, a reconnaissance force to learn and understand conventional brick-and-mortar grocery operations. So now, if a retailer is not located in an affluent metropolitan suburban area, one has little to fear.” But he added, “In the near term, if this format gains traction, the first indicators for a supermarket operator will in all probability be an erosion of e-commerce volume without a corresponding uptick in store volume.”

He continued, “Longer term, if there's ever an announcement by Amazon that they intended to self-distribute both groceries and particularly, perishables, at that point, their commitment to providing grocery products to the broader consuming population will be evident. And by removing the compounders of wholesaler overhead from their cost structure, pricing will in all probability become more aggressive. And at that point, in my opinion, one needs to become afraid, very afraid.”

Retail analyst Patrick Fisher noted that there are really three things that Amazon Fresh is doing differently. “First of all, in merchandising, the overall blending of the physical and the digital space. Secondly, in private label, how Amazon is approaching private label and how it's a bit unconventional when we think about the traditional way of developing products. And lastly, in pricing, how Amazon Fresh is using price to influence the consumer's purchasing panel.”

On the convergence of the digital and the physical, Fisher remarked that “pre-COVID many brands allocated significant amounts of money to slotting fees to get the best placements within the store. When COVID hit, a lot of those trade funds were subsequently transferred to the digital space, when sponsored products became one of the most important return on investments with their trade spend. What we see with Amazon is actually a convergence of both of these two spend buckets.”

He noted that Amazon Fresh stores have set up a number of digital spaces, such as the LCD screens that hang from the ceiling and the well-renowned Dash Cart, which has quite a large screen where Amazon Fresh can create that same type of search placement for individual brands based on their trade spends. 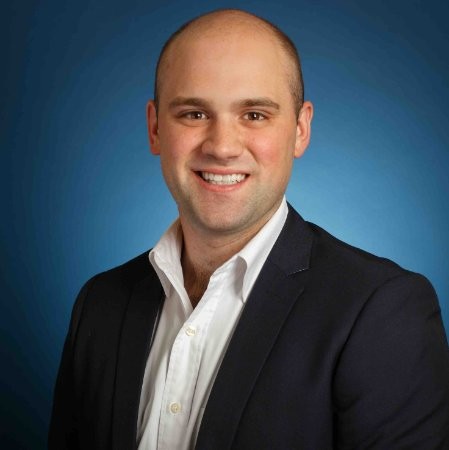 As for private label, Fisher (left) said, “When we look across all of their stores, last week alone, there were more than 17 private label brands up for sale within their store, which focus on packaging, design, marketing and merchandising to create a value proposition for the customer. For instance, its newest brand, Aplenty, is charging a premium compared to the organic Whole Foods private label and Amazon’s Happy Belly brand.

“The value really comes in the packaging is what we were able to see,” said Fisher. “The ingredient decks are basically the same, except for Happy Belly having some stabilizers. But the real value is in Aplenty's packaging, which is in the glass jar, versus Happy Belly's plastic squeeze bottle that we would see on a lot of other mustard brands. Which one would you rather have on your table? This has really helped to understand how they've been able to use packaging as a value add for their products.” 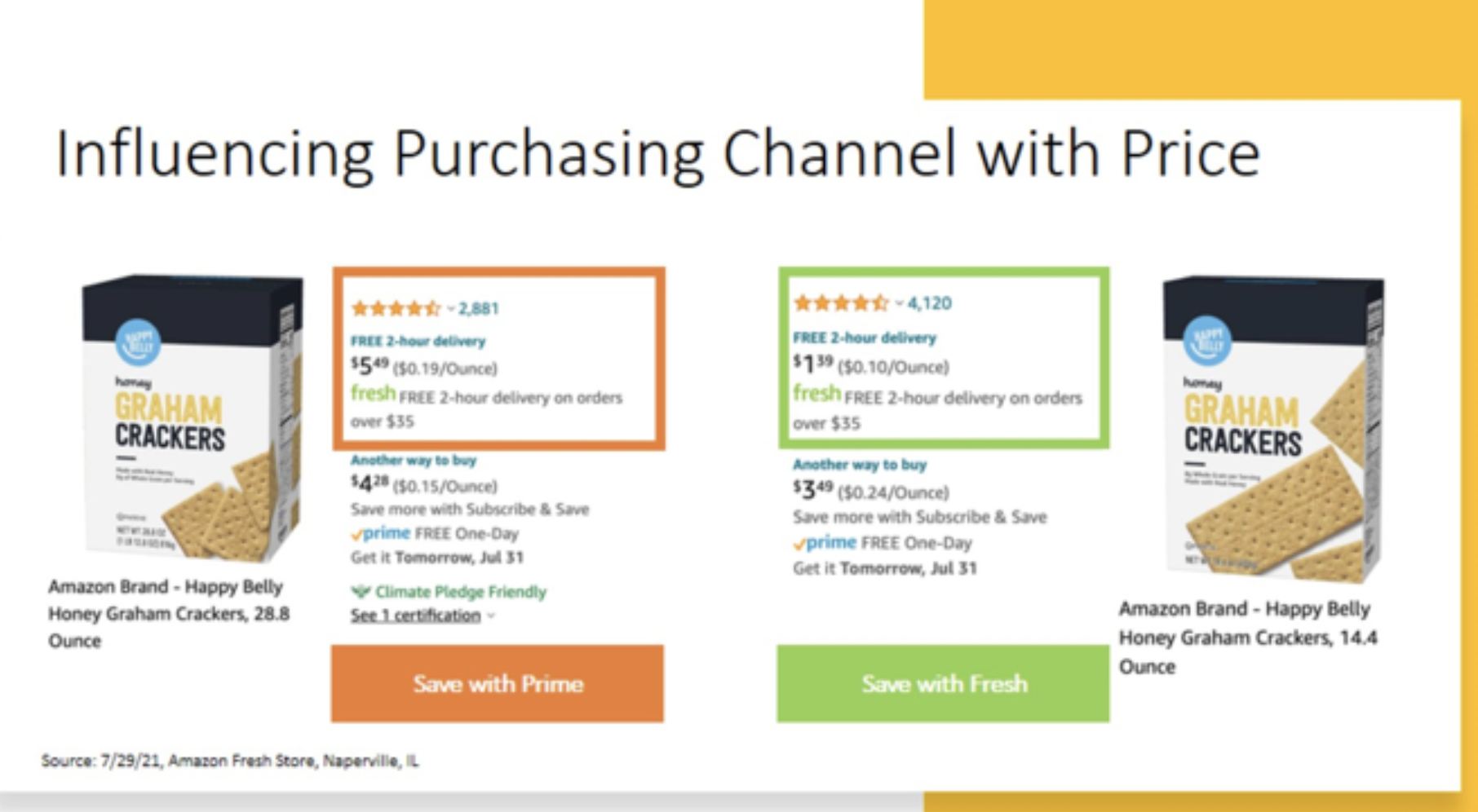 On pricing, the important factor is that Amazon Fresh is trying to influence the purchasing channel of the consumer with a given price point, Fisher said. Using the example of private-label Happy Belly Graham Crackers shown above, Fisher said, “On the right-hand side, we see the 14.4-ounce conventional Graham crackers. And on the left-hand side, it's a larger pack size. And from the Fresh delivery or in store, it's a pretty significant price difference that you wouldn't normally see when you talk about the same product in a larger size. On their smaller size, they are certainly, trying to go competitive with their price point, in order to kind of lure customers in to either use a Fresh service or to visit their store. And subsequently, they have a much higher price point with their Prime. Whereas in the larger pack size, the Prime price is actually lower than the in-store price.

“That could be for any number of reasons,” he said. “But what we can really tell is that they're trying to use price here to influence how customers are purchasing specific items in their store.”

Brick Meets Click’s Bill Bishop shared his expertise on what to expect from Amazon Fresh growth, saying, “I think it's clear that the store is not the threat. The real threat, and it's existing today, is the capture of online grocery customers who favor delivery.” 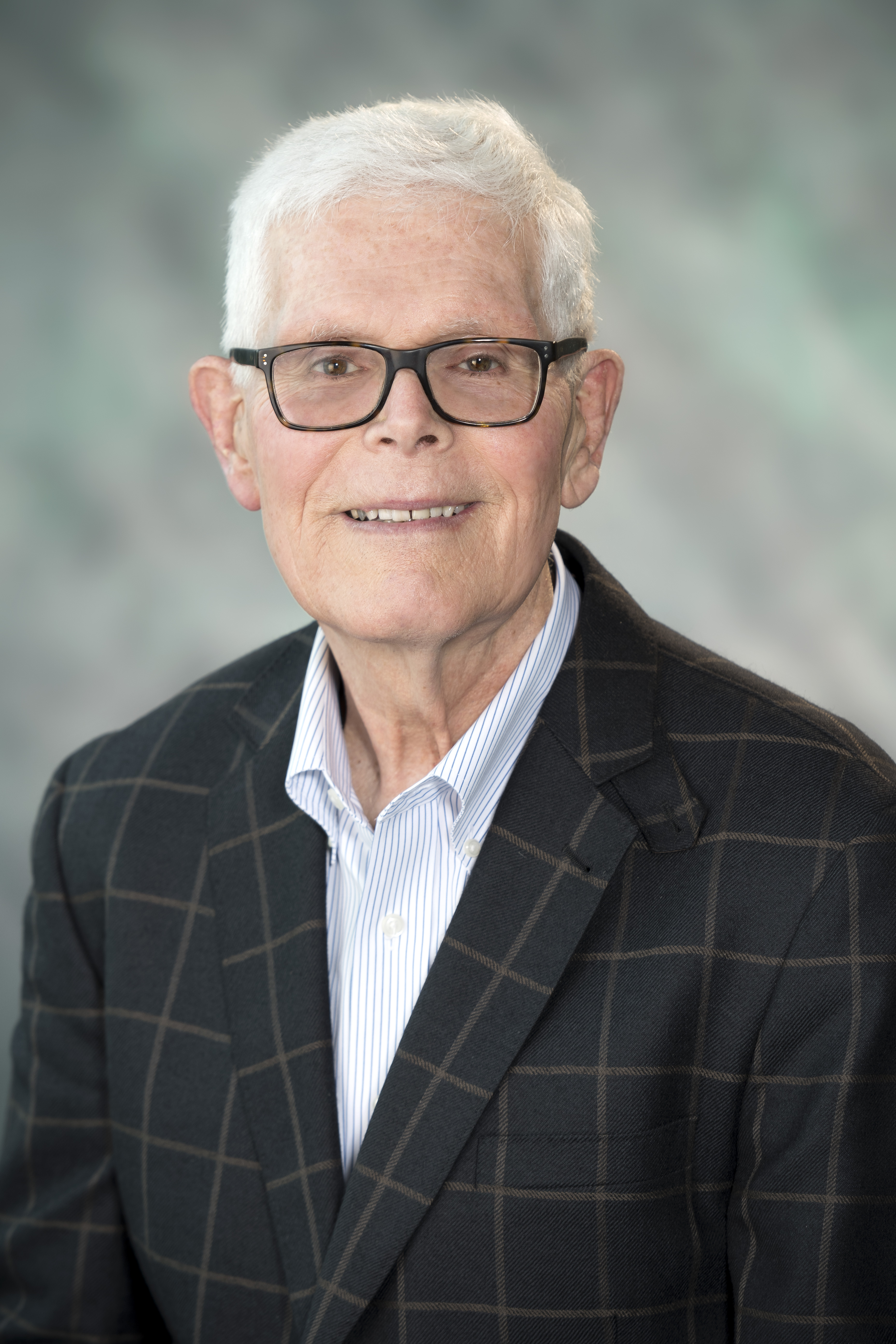 Bishop (left) pointed out that while in today's world, delivery isn't necessarily the preferred option —it’s pickup, according to Brick Meets Click research — but he added, “Even in hard data over the course of the pandemic, delivery grew over 300%. So it's not like people aren't interested in delivery. And what we've observed out in the Bay Area is that Amazon Fresh through not necessarily their stores, but through their website and delivery, has taken a fair amount of grocery business out of the market and into their business, probably without any retailers being totally aware of that competition. So the threat is not necessarily the store. It's the loss of online business.”

Pointing to the Whole Foods business, Bishop noted that with those stores, Amazon is forced to operate where the stores are located. “It's very evident after studying this as much as we have, that Amazon has to be in the brick-and-mortar world to accomplish their long-term objective in grocery,” Bishop commented. But customers tend to treat Whole Foods as more of a specialty store, and not for their everyday grocery shopping.

“When Amazon first bought Whole Foods, they had expected to see a customer profile that was much more typical,” said Bishop. “They didn't get that. So I'm sure that was a frustration, and probably led in part to the creation of Amazon Fresh.”

He continued, “Now Amazon Fresh stores themselves are interesting in that they first and foremost serve as a way for the retailer to go directly to the markets that they're attracted to. With Whole Foods, they had to accept wherever the stores were and make the best of those trade areas. But I think as they've moved forward with Amazon Fresh, what they've been able to do is to target areas that make sense to them.

“And the very consistent point is that they're going places where there's a lot of customers with a wherewithal to spend a fair amount on grocery. So they are fishing where the fish are. They can go where they want to go and avoid the areas they don't.

“Secondly, and this is a subtle point, but it's an important one. The store itself is actually an important element of a grocer's marketing proposition. It's a regular reminder that Amazon is in the grocery business. And it's a place where if you're unsure about what their products look like, you can go and visit. So having these stores out there as that kind of reference for customers, as well as reminder, I think, is an important role it plays.

“And then thirdly is that there are almost always more professional Amazon shoppers in the store than customers. So the store is a hub for distribution, as much as it is a retail proposition.”

As supermarket operators carefully watch the growth of Amazon Fresh and weigh the significance of its threat, Bishop and the other panelists on webinar agreed on one strength traditional grocers need to rely on: customer service.

As Bishop recounted, “We stopped in Amazon Fresh one day and were looking at the butcher section of really good-looking meat. So I asked the gentleman behind the counter, ‘Is it possible that we could get a little thinner kind of that steak?’ And he looked at me and said, ‘I'd like to do that, sir, but we don't even have a saw in the store.’

“So expect basically, that these stores are staffed with capable, generally well-trained people, but are not designed to provide customer service. So your way through to competing with this, is to deliver a customer service that has that personal touch."