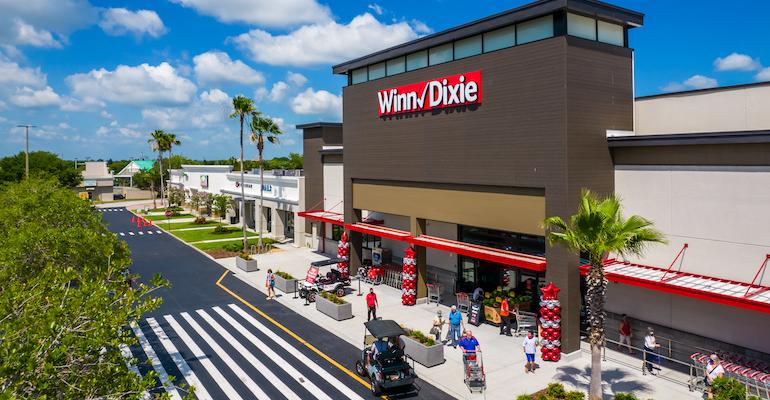 Southeastern Grocers (SEG) this week took the first step in its store upgrade and expansion plan for 2021.

Jacksonville, Fla.-based SEG on Wednesday opened of a new Winn-Dixie supermarket in Viera, Fla., converted from one of four locations acquired last year from bankrupt Earth Fare. With the new store, SEG said it’s on track to have remodeled 70% of all its locations by the end of this year.

“We are incredibly proud to celebrate our newest Viera store, the most recent of our nine new Winn-Dixie stores throughout Florida,” Anthony Hucker, president and CEO of Southeastern Grocers, said in a statement. “This expansion marks our continued commitment to increase our presence in our home state and to strengthen all the communities in which we serve. We look forward to providing our Viera community fresh, quality products tailored to their unique needs and preferences, while delivering remarkable service that they can always count on.”

Located in the Viera Village Center at 5410 Murrell Rd., the Viera Winn-Dixie features six front-row golf cart parking spaces, aimed at catering to the transportation preferences of the community, SEG said. The parking lot also has a Tesla Supercharger location to enable Tesla owners to charge their electric-powered vehicles while grocery shopping. A Winn-Dixie liquor store opened next door to the supermarket earlier this year.

Inside, the Viera supermarket brings a new farm-fresh produce department, with a larger selection of signature categories (such as fresh and dried peppers, tomatoes and mushrooms), an assortment of tropical fruits and berries, and more than 100 organic varieties. The store also serves up a wide assortment of specialty cheeses, more than 15 varieties of artisan-baked breads, and grab-and-go meal options, such as chef-prepared plant-based proteins, take-and-bake pizzas and sushi made fresh daily.

SEG has sharpened its focus on Winn-Dixie with the phaseout of the Bi-Lo banner, part of a five-year business transformation strategy following the company emergence from Chapter 11 bankruptcy in May 2018. Earlier this year, SEG shelved a planned initial public offering, but the retailer doesn’t appear to be slowing plans to bolster its store base.

Including 180 remodels completed by the close of fiscal 2020, SEG said in the IPO prospectus that it will have upgraded 55% of its store base since the start of fiscal 2016. Snother 42% of stores are slated to be remodeled in the next four years, or about 55 renewals annually, which would result in 97% of the store network upgraded by the end of 2024. Renewed stores, led by Winn-Dixie, have seen an average sales increase of about 10% and a return on investment that “consistently exceeded our internal 20% target,” the company said in the IPO filing. New store openings are forecast at about 10 per year starting in 2022.

Going forward, about 87% of SEG’s grocery store base will consist of the Winn-Dixie banner. After Bi-Lo and other store dispositions, the company reported that it will operate 419 supermarkets under the Winn-Dixie, Harveys and Fresco y Más banners in Florida, Alabama, Louisiana, Georgia and Mississippi, as well as 140 liquor stores, 231 in-store pharmacies and one central specialty pharmacy.