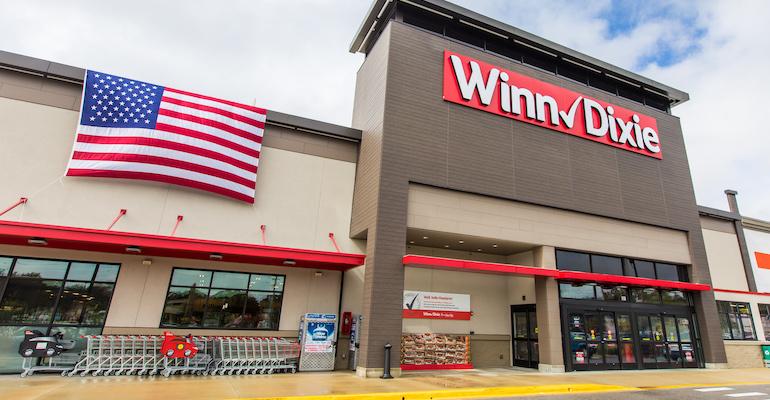 Southeastern Grocers said the four openings are the first of eight new Winn-Dixie stores scheduled to launch across Florida, with locations in Fort Myers, Lake Mary and Melbourne to come later this year and a new store in Viera slated to open in early 2021.

Overall in 2020, Winn-Dixie is opening nine new stores in Florida. The first location opened in February in Jacksonville’s Brentwood community. The stores opened on Nov. 11 are the first of four Lucky’s Market and four Earth Fare locations acquired in auctions this spring during those companies’ recent bankruptcy proceedings. The stores acquired from Lucky’s are in Fort Myers, Gainesville, Lake Mary and Melbourne, while the former Earth Fare stores are located in Boynton Beach, Jacksonville, Lakewood Ranch and Viera.

In recognition of Veterans Day, all Southeastern Grocers stores are offering an 11% discount for active duty and veteran customers, and each new Winn-Dixie store will honor military heroes in their grand opening celebration. Combined, Winn-Dixie and the SEG Gives Foundation are donating $80,000 to veteran-related initiatives.

“We are beyond excited to unveil our four new Winn-Dixie stores to the wonderful communities of Boynton Beach, Gainesville, Jacksonville and Lakewood Ranch. We are proud to provide our customers a shopping experience that is uniquely crafted for their community,” Anthony Hucker, president and CEO of Southeastern Grocers, said in a statement. “At Southeastern Grocers, giving back to our communities is in our DNA, and with our grand openings occurring on Veterans Day, we are proud to recognize the men and women who served our country in the most admirable way.”

The new Winn-Dixie locations come as Southeastern Grocers pushes ahead with its strategic growth plan. Last month, the Jacksonville-based retailer filed for an initial public offering, in which its common stock would list on the New York Stock Exchange under the ticker symbol “SEGR.”

In recent years, Southeastern Grocers has worked to restructure its business, focusing primarily on Winn-Dixie, and consolidate its store base. The company in September announced deals to sell 23 stores under its Bi-Lo and Harveys Supermarket banners to grocery wholesaler and retailer Alex Lee and independent operator B&T Foods. The transactions furthered plans to dissolve the Bi-Lo banner, disclosed in June when the company announced the sale of 62 Bi-Lo and Harveys stores and a distribution center to Ahold Delhaize USA’s Food Lion chain.

The phaseout of Bi-Lo is part of a five-year business transformation strategy following Southeastern Grocers’ emergence from Chapter 11 bankruptcy in May 2018. In focusing on its Winn-Dixie, Harveys and Fresco y Más chains, the company said that nearly 40% of the store base has been remodeled in the past three years.

With the IPO, Southeastern Grocers will operate 420 stores under the Winn-Dixie, Harveys and Fresco y Más banners in Florida, Alabama, Louisiana, Georgia and Mississippi, as well as 140 liquor stores, 231 in-store pharmacies and one central specialty pharmacy, according to the filing.