A peek at a proposed floor plan and fixtures for Whole Foods' new 365 concept reveals intentions for light labor requirements as the retailer tackles a more efficient interpretation of its natural/organic superstore.

While the proposed location — in this case, a store scheduled for a July opening in Lake Oswego, Ore. — devotes considerable floor space to perishables, it accompanies paring down of service departments including shared prep space for meat and seafood, and what looks to be intentions to emphasize prepackaged fresh items.

Whole Foods is scheduled to open the first location of 365 next month in Los Angeles and has at least 13 stores in the works. 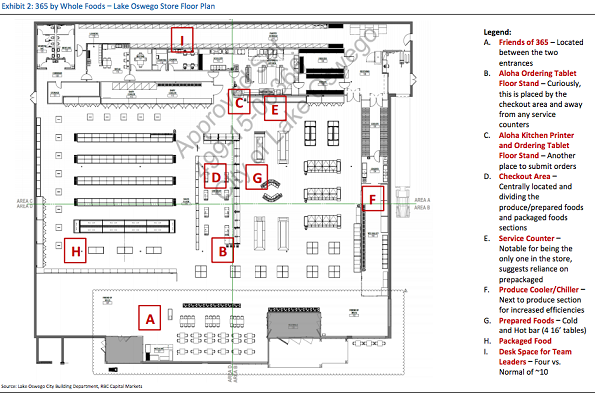 Kirk noted that Whole Foods has ordered only one meat weigh station, suggesting a preference for pre-labeled and pre-packaged meat. The shared meat and seafood prep area also includes a pizza oven. "Service counters appear to be less abundant than at a legacy WFM," Kirk said.

In another indication of intentions to reduce labor, the Lake Oswego floor plan includes office space for store leaders that seats four — as opposed to 10 at a legacy Whole Foods store.

The store is also designed to incorporate technology: e-commerce delivery business Instacart has been allotted space near a secondary entrance, and Aloha ordering interface systems are located by the meat counter and near checkout. Aloha is a technology allowing businesses and restaurants to efficiently expedite take-out orders.

There is also space devoted for "Friends of 365" or co-located businesses partnering with the store. In Lake Oswego, this space is between entrances and appears to include a restaurant.

Kirk in an accompanying research note said he was "bullish" on the 365 concept, saying the new model addresses productivity issues plaguing the company's legacy stores.