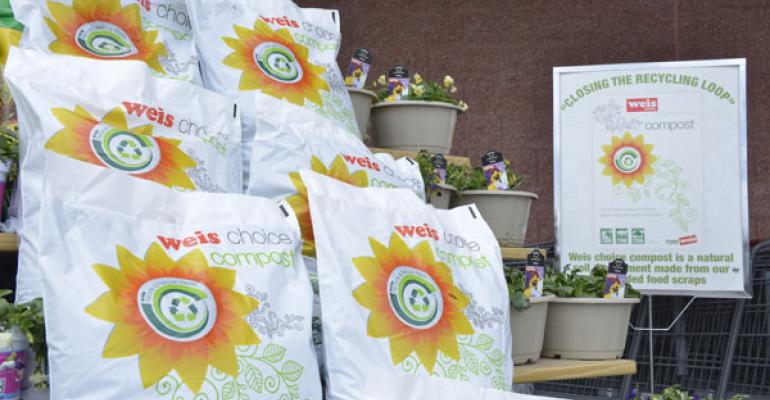 Each bag of Weis Choice compost has a net weight of about 20 pounds and sells for $5.
Product Categories>Bakery

SUNBURY, Pa. – Weis Markets here has begun selling private-label compost created from store-provided food waste at all of its 164 stores.

The compost is being produced at American Biosoils & Compost, Skippack, Pa., which is receiving food waste – in the form of leftover produce, bakery, floral and other products – from 30 Weis stores, said Patti Olenick, sustainability manager for the chain, adding that 20 additional stores will be contributing food waste by the end of September.

“We’re pretty much guaranteed that the compost we’re selling is from our food waste,” she said.

Each bag of Weis Choice compost retails for $5 and contains one-half cubic yard (about 20 pounds) of material. It is merchandised outside of stores with seasonal and floral products. Weis had previously sold the compost at select stores over the past few months.

The compost packaging features a certification seal from the U.S. Composting Council, as well as the council’s recommended uses for the product, such as on lawns, gardens and shrubs.

This weekend Weis will promote the compost for Earth Day, April 22, in fliers and store windows, pointing out that the chain is “closing the recycling loop.”

The composting effort is expected to either save Weis money or be cost neutral (not including retail sales of compost), Olenick told SN last year.

Weis also donates baked goods from all of its stores and is looking at increasing the frequency of donations and expanding the program to other fresh departments such as meat and producr, said Olenick.

Last year Weis announced it was expanding its composting and food donation programs in line with the U.S. Environmental Protection Agency’s Food Recovery Challenge, aimed at reducing food waste sent by the industry to landfills.