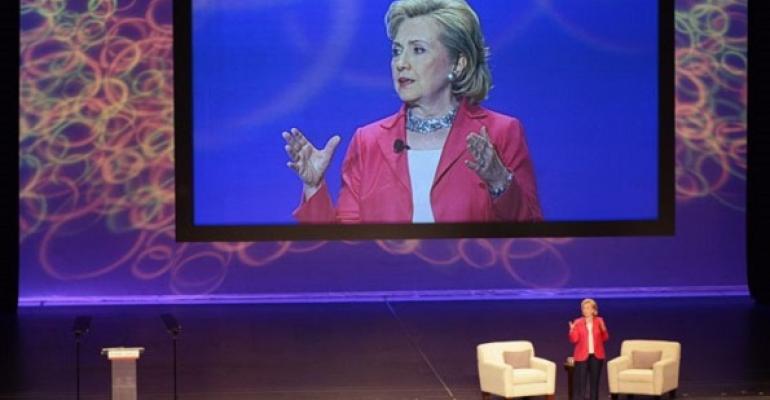 Instilling healthy eating habits in the younger generation was one of the challenging choices Clinton highlighted.

Clinton applauded the "Let’s Move Salad Bars to Schools" program as well efforts by the Alliance for a Healthier Generation, an initiative between the Clinton Foundation and the American Heart Association that has partnered with food and beverage companies to reduce calories in foods in schools.

Most recently, the Alliance for a Healthier Generation worked with McDonald’s to promote more fruits, vegetables and healthier beverages, she said.

“I think we need more partnerships like this. And I know that you’re thinking about different ways that your industries can give those healthy choices to our families,” Clinton said.

“How do we make sure they get the support and the nutrition they need so that they can grow up to be healthier, and they won’t have health problems and our health care system won’t have so many diet-related problems such as diabetes? These are some hard choices.”

In some cases, Clinton said the there are “false choices” being presented, such as in the recent Congress debate on whether to allow exceptions from the mandated nutrition standards for school lunch programs.

“The idea is that it is too expensive to provide healthy foods so the default position: Don’t serve healthy foods,” Clinton said.

“It’s too difficult to learn how to prepare healthy foods, so the default position is we’re just going to back to what everybody is willing to eat and because of the environments that many of us are raised in or live in, that may or may not be healthy.”

In the question-and-answer portion of the keynote, Clinton spoke in support of immigration reform and the bill the Senate passed last year.

“I know how important having a steady supply of reliable works are for agriculture because of my experience representing New York.”

The general session was sponsored by Wonderful Brands.