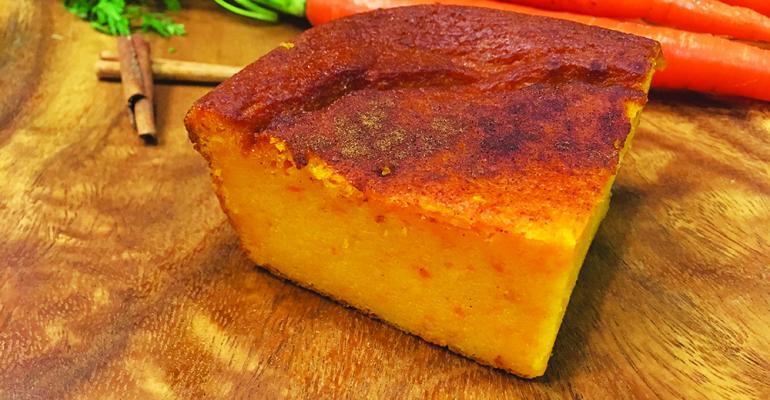 Ben D’Amico/Giant Eagle
A Giant Eagle staple on and off since the 1980s, carrot soufflé has been a consistent menu winner since 2005.
Product Categories>Bakery

Giant Eagle’s carrot soufflé has a long history, and a bright future

There’s a story behind every soufflé, according to Ben D’Amico, product development chef for Giant Eagle and Market District stores. And the story behind the retailer’s carrot soufflé involves the passing down and sharing of a recipe that reigns as one of the most popular prepared foods side dishes for more than 30 years at Giant Eagle.

It was in the mid 1980s that Pennsylvania-based Giant Eagle opened its first Gourmet Department at its Waterworks store in Pittsburgh. On a whim, Barb Pieczynski, then a clerk at the prepared foods counter, suggested a family recipe that first came to her from her brother-in-law’s aunt. The carrot soufflé was a longtime family favorite served not just at holidays, but as a menu standard at Sunday meals. Barb made it at home and brought it in for the store team to taste the next day. As the story goes, they loved it and started to sell it soon after.

The recipe has been through many adjustments over the years, said D’Amico. First it was made in a store, later the recipe was sent to a manufacturer to produce for Giant Eagle. Around 2005, carrot soufflé fell off the menu for a few years from Giant Eagle. The recipe was updated and produced in-house exclusively for the retailer’s Market District locations, where it once again grew in popularity and once again became a menu staple. Today the same recipe from 30 years ago is produced at a manufacturer and available at all Market District and Giant Eagle locations.

That recipe is a rather basic mix of fresh carrots, cinnamon, sugar, eggs, cream and butter that gets baked and forms into a custard-like texture that has a smooth, silky texture and an amazing flavor (based on customer reaction).

“Our guests really love it,” said D’Amico, “and we’ve expanded how and where we sell it. Even today, 30 years later, it remains toward the top of our prepared foods sales at Market District.”

He continued, “I think the best feature about the carrot soufflé is its texture. It has such a delightful, creamy texture whether you eat it cold or warm it up. It’s so unique because it’s rather untraditional — when you think of a soufflé, the last thing that comes to mind for most people is carrots, but for us it’s top of our minds.”