“We wanted to get the information out there that they could multitask and do some shopping while they were in transit, waiting for the train or the bus,” said Elana Margolis, a spokeswoman for Peapod, the Ahold-owned home-delivery service behind the virtual shopping trip. 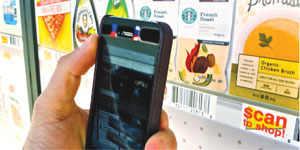 Welcome to the world of shopping walls. In early February, Peapod began plastering giant ads at 15 commuter locations in and around Philadelphia, each one featuring about 50 products covering all categories. To transform themselves into shoppers, commuters first needed to download the Peapod app using a QR code on the ad. Their smartphones could then scan the barcodes of the featured products. Peapod fills the shopping order through the retailer’s Giant of Carlisle banner.

“You could order today for tomorrow morning,” Margolis said.

Britain-based Tesco pioneered the idea last summer when it covered a subway station wall in Seoul, South Korea, with products from its Home Plus stores. Industry observers say the technology is able to combine the best aspects of marketing.

“It brings together advertisement and real-time marketing with an actual sales opportunity,” noted Anne Zybowski, director of retail insights for Kantar Retail, a consulting firm.

Inspired by Tesco’s success, Sears/Kmart employed shopping walls this past holiday season that featured their most popular Christmas toys. Placement of the wall ads was key, officials said.

“We looked into airports, bus shelters, shopping malls that don’t have a lot of toy shops, and in theater lobbies,” said Julia Fitzgerald, chief digital engagement officer, toys and sporting goods, for Sears Holdings Corp. “I was seeking relevant dwell time where people could still get a phone signal.”

A sizeable number of purchases were made from the wall, but not in the way Fitzgerald was expecting. Customers chose to visit the company website using special URLs posted on the ad, rather than order outright using the QR codes.

Such data indicate that American consumers aren’t quite comfortable yet using QR codes, a premise backed by recent studies. One by comScore found that in June 2011, only 6.2%, or 14 million, of mobile users in the U.S. scanned a matrix barcode with their mobile device.

For supermarkets, the challenges are more about logistics. Experts warn that in this day and age, anyone ordering a product is going to expect it within a certain time period — a span that narrows considerably when it comes to food.

“I think shopping walls will be experimental for quite some time, particularly for food retailers, because of supply chain capabilities,” said Kantar’s Zybowski. “If you’ve already compressed the time between marketing to purchase, you’re not going to want a huge lag between then and delivery.”

Finally there’s a proper Asian dessert to serve along with that inspired dinner of nori (sheets of dried seaweed used to wrap sushi) and black tofu. While all three have become trendy in the West, it’s chewy, doughy mochi that’s currently getting the most attention. 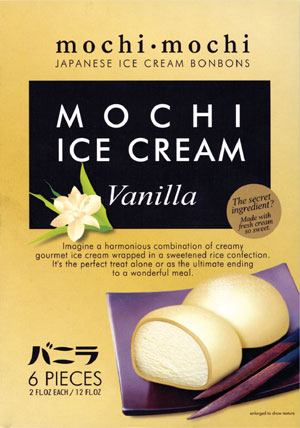 Although it sounds downright indulgent, there’s a lot for health lovers to like. Mochi appeals to gluten-free consumers because it’s made with rice flour. The center can be filled with sweetened red bean paste, whole pieces of fruit, or — for the indulgent person — ice cream. Bubbies, a popular brand based in Aiea, Hawaii, makes ice cream mochi in flavors like azuki bean, green tea, mango and blueberry. The company’s offerings are currently on display at The Mochi Store in New Haven, Conn., which recently opened.

“Some people will chew for about 20 seconds and not say anything,” said Harrison Robbins-Pesce, the store’s owner, in an interview with the New Haven Register. “Then they’ll smile and say: ‘It’s weird, but it’s very good.’”

While Bubbie’s is made fresh, a number of retailers like Trader Joe’s, Mollie Stone’s and Asian food retailers like H-Mart and Mitsuwa offer all sorts mochi throughout their stores. American palates tend to favor the ice cream variety, making them more suitable for a meal-ender or a summer-day snack.

Americans popped the top on two sodas a day in 2011. Anyone making or selling carbonated soft drinks should be pleased with such a number. 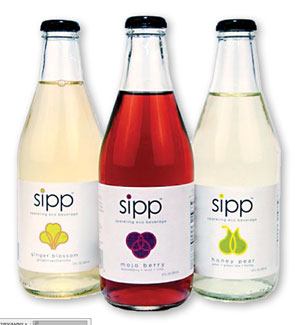 The only problem is that the 714 eight-ounce servings that the average consumer quaffed last year is down from the 728 they drank in 2010, according to statistics compiled by Beverage Digest. The numbers show that per-capita consumption was the lowest since 1987.

Health messages are taking some of the effervescence out of sales. Public health advocates have blamed soda for promoting obesity and diabetes, and consumers have begun turning to beverages with a better-for-you ingredient list. The rapid rise of energy drinks has also sapped CSD activity.

“Carbonated has been losing ground to other kinds of beverages for quite some time now,” noted Tom Vierhile, innovation insights director at Datamonitor.

There are niches of growth, however. Premium sodas made with herbs and spices, and sweetened with cane sugar or agave, continue to gain market share.

Joia, launched last June, is typical of many premium CSD start-ups. The tightly-focused line of four varieties is made with a fruit, an herb and a spice. The flavors are layered and distinct, much like a wine.

“We usually recommend at tastings that people treat it like a wine — sniff first, then take a sip,” agreed Beth Wilson-Parentice, CEO of Sipp Eco Beverage Co., Uwchland, Pa.

Despite the specialty nature of the ingredients, mainstream retailers are more willing to stock the beverages in large part because they’re experiencing similar sales activity in other categories, added Safford.

“As you look across the grocery industry today, you’re seeing more unusual flavors based on spices and herbs that are finding their way into just about every category — salty snacks, crackers, frozen foods — you name it,” he said.

The beguiling flavor profiles of premium sodas also qualify them for sale in bars and foodservice establishments that feature culinary cocktails. Joia’s Lime, Hibiscus & Clove soda could inspire a unique twist on the classic gin rickey, for instance. Oftentimes, it’s as a cocktail mixer that consumers get their first taste, prompting them to ask if the sodas are available in stores.

“One out of two people who try Sipp will stop and tell me, ‘Wow, this would be great with vodka,’” said Wilson-Parentice.

Many consumers took up pastimes like food gardening and canning during the recession as a way to save money. Since then the economy has improved, but the gardeners are still getting their hands dirty.

According to the National Gardening Association, the number of people keeping vegetable gardens spiked in 2009 — to 31 million, up from 27 million the year before. That level of interest has stayed consistent over the ensuing three years, indicating people have found a newfound love for gardening that goes beyond saving money.

“You have this perfect storm of people wanting to eat healthy, economic concerns and the fact that it’s just a great hobby,” said Bruce Butterfield, market research director with the NGA.

Since gardening starts with seeds, retailers are merchandising their selections in their floral departments, and some have even cross-promoted within the produce section. Hy-Vee, Des Moines, Iowa, offers everything from herbs to tomatoes to sweet corn in its garden centers. The company also airs a program on local television called “Get Growing” featuring gardening expert Jerry Kluwer, who offers tips and fields questions from viewers. One of the topics from a recent show: When is the best time to start a garden?

Judging from recent activity, the answer would seem to be now.

The Fit List: The Best in Health, Wellness and Sustainability
May 21, 2012