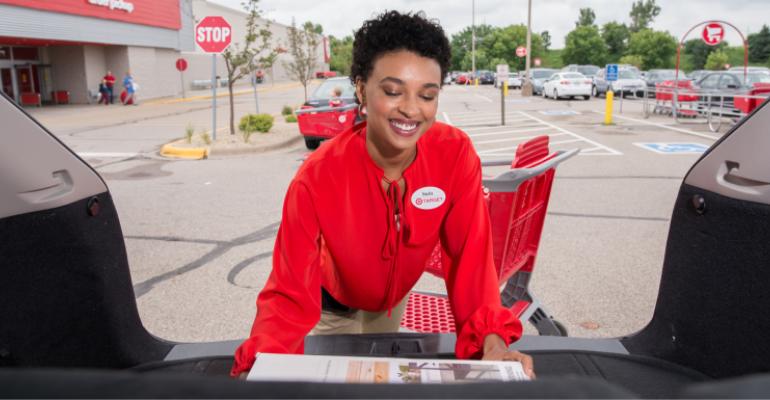 Target
Target’s Workforce Diversity Report reveals that the company’s workforce of nearly 350,000 team members is 50% people of color and more than half (58%) are women.
Issues & Trends

Retailer reports half of its workers are people of color, and more than half are women

Minneapolis-based Target on Thursday released a detailed racial and gender breakdown of its team across all levels of the organization and announced plans to increase representation of Black team members across the company by 20% over the next three years by sharpening its focus on advancement, retention and hiring.

According to Target’s Workforce Diversity Report, based on 2019 information, the retailer’s workforce of nearly 350,000 team members is 50% people of color and more than half (58%) are women. Forty-two percent of Target’s leadership team is comprised of women and nearly a quarter (24%) are people of color. Additionally, Target has doubled the representation of company officers of color in the past five years. On its board of directors, one-third are women and nearly half are Latinx or Black. More than half of its nearly 2,000 stores are run by female leaders and a third are managed by leaders of color.

“Inclusivity is a deeply rooted value at Target and we’ve had an ambitious diversity and inclusion strategy for many years for our guests and team,” said Melissa Kremer, chief human resources officer. “We know that having a diverse workforce and inclusive environment not only creates a stronger team, but also provides the perspectives we need to create the products, services, experiences and messages our guests expect.” She continued, “The next step in this journey is being even more transparent with our progress by sharing a deeper look into the racial and gender diversity of our team, listening to our team’s feedback along the way and using this information to drive a number of new commitments for our team.”

“The changes we’re making are going to have a meaningful impact on the careers of our Black team members and prospective team members,” said Kiera Fernandez, vice president, human resources and chief diversity and inclusion officer at Target. “A diverse and inclusive team at Target is one where there’s equity in how we promote, retain and hire team members. Additional leadership development, training programs and mentorship for our Black team members, along with a focus in areas of the business where our Black representation is not as strong, will offer new career development opportunities for our team for years to come. And we know the support we have for our team helps extend our reach outside our walls, creating a ripple effect that impacts our guests and communities.”

The release of the data and yesterday’s announcement are part of Target’s commitment to social justice and racial equity and is being launched by the Company’s Racial Equity Action and Change (REACH) committee. This group of six senior leaders from across Target represents a diverse range of perspectives and expertise and guides the retailer’s efforts to engage in the fight to end systemic racism in the United States.

Target has a personal stake in the battle against racism: The company is headquartered in Minneapolis, where George Floyd, a Black man was killed by a white Minneapolis police officer on May 25, leading to a summer of protests and unrest nationwide this summer. In early June, Target and the Target Foundation unveiled a $10 million investment to support partners — including the National Urban League and the African-American Leadership Forum — in its efforts to advance social justice and help local communities rebuild and recover from damage caused when some of those protests turned violent.