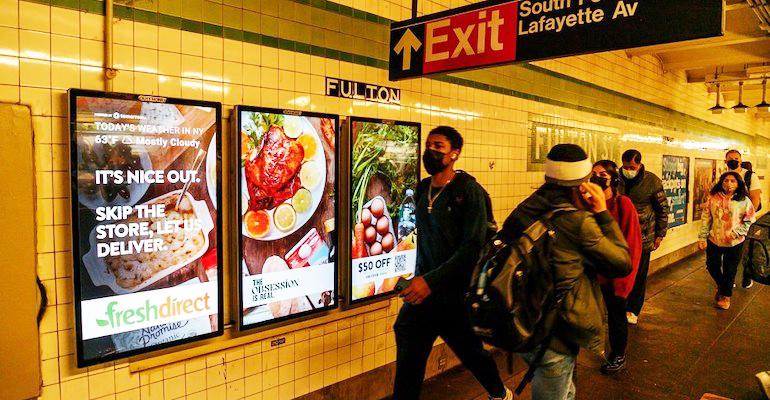 FreshDirect takes its fresh food message to the rails

Partner OUTFRONT Media said yesterday that its MOMENTS in Food content partner, So Yummy, worked with FreshDirect to sponsor four 15-second video segments focusing on seasonal recipes to reach subway travelers. Each video includes a QR code that directly links commuters to the FreshDirect website for detailed recipes and a path to purchase for the ingredients featured in the branded content spots.

“As a great local New York City brand for 20 years, FreshDirect has been meeting our customers where they are, delivering the highest quality, fresh food to their doorsteps,” John MacDonald, chief marketing officer for New York-based FreshDirect, said in a statement. “This campaign enables us to reach them beyond their doorsteps and at various points of their daily commute throughout the city. We are excited and proud of our collaboration with OUTFRONT and Quan Media Group.”

OUTFRONT said the FreshDirect campaign also includes dynamic creative ad units that trigger contextual messaging changes based on the latest weather conditions. Powered by weather intelligence provider Tomorrow.io, the ad units show the latest weather conditions visualized in the creative, paired with a relevant recipe based on the forecast. The imagery changes in real-time to spotlight FreshDirect to subway and commuter rail riders during New York City’s cold winters.

In addition, the FreshDirect campaign extends to static brand trains within the subway system, providing the brand with several touchpoints of impact and mass reach to subway riders throughout the city, according to OUTFRONT.

“We are thrilled to partner with FreshDirect and Quan Media Group on this innovative new campaign,” commented Andrew Miller, vice president of innovation and product engagement at OUTFRONT. “FreshDirect’s use of both branded shoppable content and dynamic creative has allowed them to connect with subway riders in a meaningful way.”