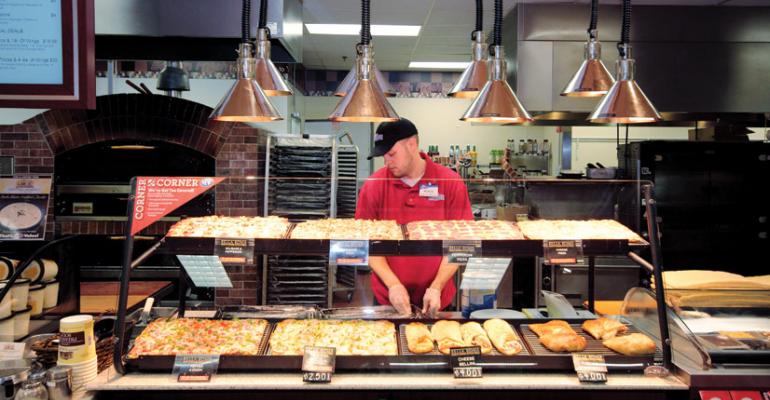 About 70% of restaurant diners won’t try a new menu item, according to a new report from the NPD Group.

For supermarket foodservice to overcome those odds, the steps seem simple, but many retailers don’t execute them well, according to Warren Solochek, NPD’s vice president of client development for the foodservice division.

“So maybe for a supermarket it’s advertising it in their weekly flyer. And then setting it off someplace within the case so that people can identify it as the new salad. And then saying, OK, here’s what’s different about this salad. Here are the things you need to know as a consumer,” said Solochek.

First, the food must look appealing.

“Because the number one thing that is going to drive somebody to try something in a restaurant is the food looks good. It’s either described well on the menu or it will look good in a case,” said Solochek.

Customers also want to know what’s in the item. If the new item is a chicken salad, for example, what part of the chicken was used? What are the other ingredients?

Some may want to know the item’s nutritional information.

Getting customers to try a new foodservice offering by sampling or demoing is another obvious but underused tactic, Solochek said. He pointed to Costco Wholesale Corp. as a retailer that recognizes the benefits of sampling.

“And I’m sure they do that because they know that once somebody tries a sample of something, there’s a good chance that they’re actually going to buy it,” said Solochek.

Supermarkets have long enticed consumers to try new consumer packaged goods products through promotions like coupons or buy-one-get-one offers, but rarely do so for foodservice, Solochek noted.

“And so people feel like, I can take a chance on trying a new thing because I’m able to purchase it at a discount and so my risk is pretty low,” said Solochek.

Finally, the food must taste good.

“And if the quality’s not good the first time, the likelihood that you’re going to get a repeat purchase is not very high,” said Solochek.

When it comes to what new items restaurant patrons are willing to try, about half are main dishes and almost half are sandwiches, NPD reports.

Both categories are places where supermarkets can excel, especially if the items are freshly prepared in front of the customer, Solochek said.

“It may take a little bit more labor to do because somebody actually has to take the time to put it all together, as opposed to being made in a commissary, but the margins can be substantially better for a supermarket retailer.”