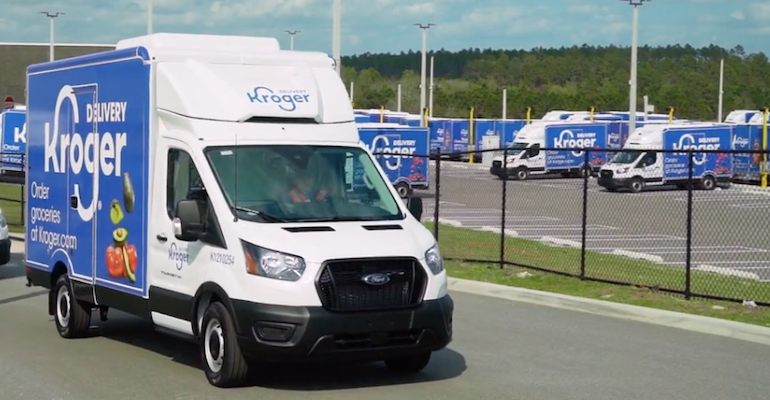 Cincinnati-based Kroger said Wednesday that it has opened a 60,000-square-foot, Ocado-automated “spoke” e-commerce fulfillment facility in Miami to support Kroger Delivery in the Miami-Dade County area. The new spoke serves as a last-mile, cross-dock location to expand the reach of a 375,000-square-foot, Ocado-powered customer fulfillment center (CFC) in Groveland, Fla., that began operations in June 2021.

To support the new South Florida service, Kroger said it aims to hire 200 associates for roles in logistics, human resources and transportation. The retailer also is offering a digital coupon giving customers $15 off their first three Kroger Delivery orders.

“We’re thrilled to introduce customers to Kroger Delivery in South Florida,” Andrea Colby, e-commerce corporate affairs and communications manager for Kroger, said in a statement. “We offer customers a more convenient option to access fresh food and grocery items. Kroger Delivery is an easy, seamless way to order groceries, have them arrive in refrigerated vans, delivered to your door by professional, uniformed associates all based on your demanding schedule.”

Kroger already had been providing online grocery delivery service to Central Florida through the Groveland CFC (above), which launched last June, and spoke sites in Tampa and Jacksonville, Fla.

Kroger had announced plans to launch e-grocery delivery service in South Florida in April. The Groveland CFC is supported by spoke facilities in Tampa and Jacksonville in providing online grocery delivery to the greater Orlando, Tampa and Jacksonville areas. Last October, Kroger said it plans to build two small CFCs in South Florida that will join its live e-grocery operations in Central Florida. The new sites are slated to include a “Zoom” micro-fulfillment center that will enable Kroger Delivery in as soon as 30 minutes from a selection of 10,000 fresh food items and essentials, plus a larger facility offering same-day and next-day service from an assortment of 35,000 items, according to Kroger.

Including the Miami site, Kroger so far has announced 10 Ocado spoke facilities. Five spokes are now live — in Miami, Tampa and Jacksonville, Fla.; Lockbourne, Ohio; and in Indianapolis — and another five are planned for Louisville, Ky.; Oklahoma City; and Austin and San Antonio, Texas, and Birmingham, Ala.

When unveiling their partnership in May 2018, Kroger and United Kingdom-based Ocado Group said they aimed to open 20 CFCs in the United States over the next three years, with Kroger executives citing the potential for facilities in markets where the company doesn’t have stores.

Thus far, Kroger has announced 17 Ocado-driven CFCs, with four now operational. They include the CFC in Monroe, Ohio — Kroger's first Ocado facility — that went live in April 2021; the Groveland CFC; a 375,000-square-foot CFC in Forest Park, Ga., that opened this past February; and a 350,000-square-foot CFC that launched in Dallas this spring. In early March, Kroger said it aims to construct a 270,000-square-foot, “Cleveland region” CFC that will serve areas in northeastern Ohio and Pennsylvania, with the latter representing the grocer’s 37th state.

Other Ocado CFCs reported by Kroger run from 135,000 to 375,000 square feet and include locations in Frederick, Md.; Phoenix; Pleasant Prairie, Wis.; and Romulus, Mich., as well as Charlotte, N.C., the Pacific Northwest, the West and the Northeast, the latter representing another location where Kroger lacks stores, along with Pennsylvania and Florida (save for a Harris Teeter store in the Jacksonville area). The retailer also has announced plans for two CFCs in Southern California and two more in Florida.

Each Ocado CFC covers a delivery radius of up to 90 miles, and smaller facilities and spoke locations extend the area served by each CFC. After being packed, online grocery orders are loaded into a refrigerated delivery van, which can store up to 20 orders. Machine-learning algorithms optimize delivery routes, gauging factors such road conditions and maximal fuel efficiency, according to Kroger.