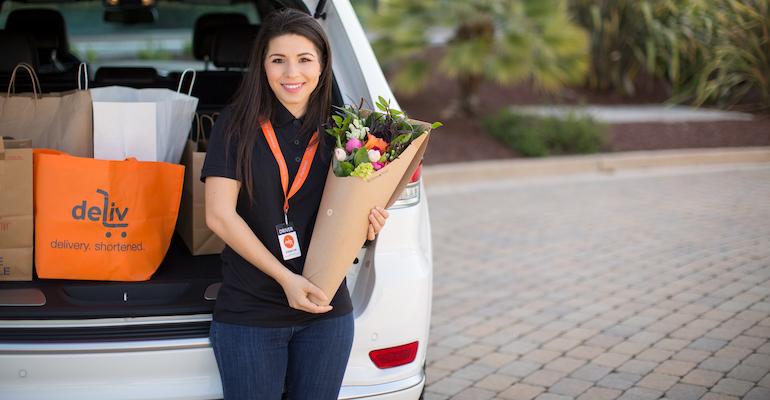 Menlo Park, Calif.-based Deliv provides crowdsourced, last-mile logistics for same-day delivery services to more than 4,000 merchants and businesses in 35 markets and 1,400 cities, including food retailers and restaurants. In its announcement yesterday, Target specified that it aims to acquire the startup’s last-mile batched delivery platform, but not the company itself. No financial terms were disclosed.

However, Target said Deliv founder and CEO Daphne Carmeli and members of the Deliv team could be joining the Minneapolis-based discount store chain “as we research and develop how we’ll use this technology in the future.” Target noted that Deliv’s proprietary last-mile platform would help the retailer deliver packages faster and reduce shipping costs, while fitting into its omnichannel strategy that positions stores at the center of digital order fulfillment.

“Our game-changing fulfillment services — like Order Pickup, Drive Up and Shipt — have already made same-day delivery and pickup possible for millions of guests,” Arthur Valdez, executive vice president and chief supply chain and logistics officer at Target, said in a statement. “This technology from Deliv is just one more example of how Target is investing for the future of local delivery.”

News of the transaction emerged on Thursday. NBC News reported that Target was in talks to buy Deliv, while a later report by The Wall Street Journal said Deliv plans to shut down operations by early August, which Carmeli had communicated to employees in an email on Wednesday.  According to TechCrunch, Deliv drivers will continue to make deliveries during the 90-day wind-down period, and employees are being offered two months of pay and options to extend health care benefits.

The Journal reported that Deliv was valued at $190 million in 2018, and since its launch in 2012 the company has raised about $85 million in venture capital. 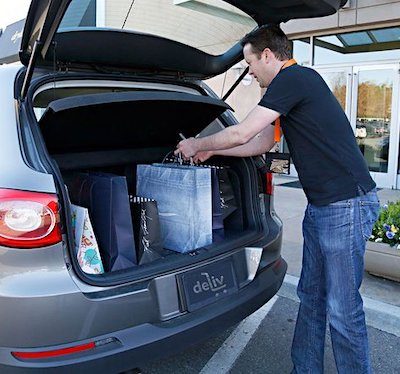 Last year, Deliv appeared to be trying to boost its presence in the grocery arena. In late January 2019, the company and Ahold Delhaize USA unveiled a partnership in which the latter’s Peapod Digital Labs arm would use Deliv’s last-mile platform to enable same-day delivery service from Giant/Martin’s supermarkets in areas where only next-day service was available. And then in June 2019, Deliv announced that former Ahold USA Chief Operating Officer and retail grocery industry veteran James McCann joined its board and become an investor.

Target signaled its entry into the on-demand delivery space in December 2017, when it announced the $550 million acquisition of Shipt, a Birmingham, Ala.-based same-day delivery specialist that primarily served grocery stores. Target has since rolled out Shipt’s service to most of its stores, and last June the retailer began offering Shipt delivery directly via target.com, not just through the Shipt website and app. Earlier, in March 2019, Target executive Kelly Caruso was named as CEO of Shipt, succeeding founder Bill Smith.

E-commerce has been a major growth driver for Target. For the 2019 fiscal year, digital comparable sales surged 29%, the sixth straight year of more than 25% growth, Target reported in March. Same-day service sales rose over 90%, or almost three-quarters of the retailer’s digital comp-sales growth. The company said sales jumped 50% for its Order Pickup service and were up over 500% for its Drive Up curbside service. Target added that it also has more than 100,000 Shipt personal shoppers delivering orders for Target stores and nearly 100 other retail brands.