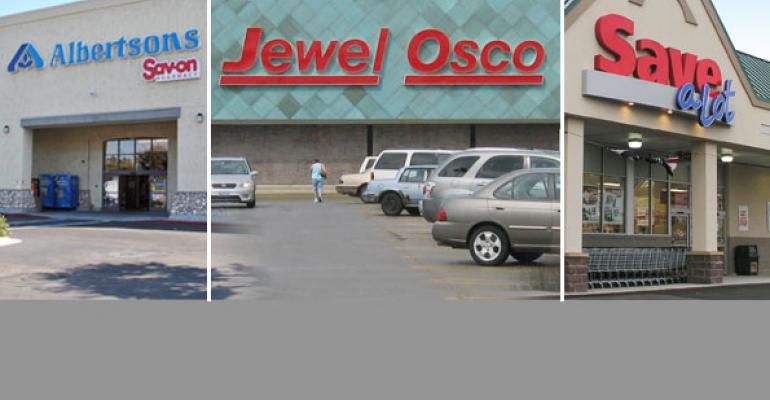 MINNEAPOLIS — Supervalu on Wednesday said its board of directors would seek strategic alternatives including the sale of all or parts of the company while announcing sweeping plans to slash expenses and capital spending after first quarter financial results fell well below expectations.

The retailer said it would reduce fiscal 2013 capital expenditures from earlier estimates of $675 million to $450 to $500 million and seek additional operating expense cuts of $250 million over the next two years. In addition, the company said it had suspeded its dividend, reached an agreement on a real-estate backed loan to replace its current credit facility, and was withdrawing sales and earnings guidance.

Supervalu shares were trading down by more than 25% in after-hours trading. In a message to employees Wednesday, Craig Herkert, chief executive officer, said the company “has to consider all options to increase the overall value of the company. Our review of strategic alternatives will be broad-based and include looking at the sale or other disposition of all or part of the company," he said.

Herkert said the moves would help Supervalu accelerate a program of price investments begun at its Jewel banner in Chicago. "Our target is to have half of our network priced appropriately to the competition by March 2013," Herkert said. "All banners will see sales-driving investments this year and will be executing the fair price plus promotion strategy by the end of fiscal 2014."

Herkert said net earnings of $41 million for the fiscal first quarter that ended June 16 were "well below plan" and "the miss was across each of our businesses." Earnings were down 45% from the same period last year.

"We need to move faster to execute our strategy," Herkert said. "The competitive environment we're in demands that we do better."

Although Herkert said in a conference call with analysts that the company was not considering bankruptcy, analysts said that was one possible scenario, as the company might find it difficult to sell assets or find a buyer, and is poorly positioned if its "fair pricing plus promotions" initiative sparks a competitive response.

"Supervalu's future is highly uncertain given the magnitude and speed of the deterioration [of fundamentals] in a seemingly unchanged environment," said Karen Short, an analyst with BMO Capital Markets.

In a conference call with investors, Herkert said he was confident that Supervalu could work with vendors to improve its pricing, and could cut costs by reducing the inefficiencies brought on by its legacy of acquisitions.

"There are a lot of opportunities to reduce expenses on non-customer-facing initiatives," he said.

He added that Supervalu "feels good" about the condition of its stores, and their ability to compete effectively despite a reduction in capital expenditures.

Supervalu operates the Albertsons, Jewel-Osco, Acme, Shaw's, Cub Foods, Shoppers and other banners around the country, and is also the parent of the limited-assortment Save-A-Lot banner, which analysts have long speculated could be the logical choice for a sale. It also remains the largest publicly owned wholesaler to independents, and the second largest overall.