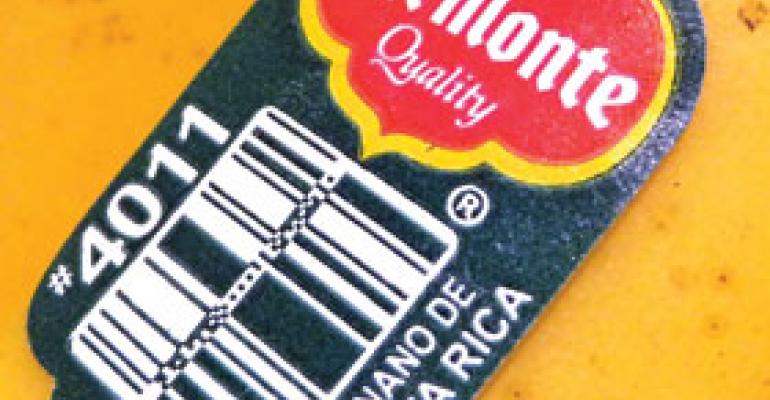 LAST JUNE, AT THE U Connect Conference in San Antonio, Greg Menz, enterprise solutions architect for Kroger Co., said the company was able to scan the GS1 DataBar (the stacked omnidirectional version) on loose produce stickers throughout its divisions. However, only 4% of the produce DataBars were being scanned, because for many items Kroger did not have a global trade item number (GTIN) in its POS

LAST JUNE, AT THE U Connect Conference in San Antonio, Greg Menz, enterprise solutions architect for Kroger Co., said the company was able to scan the GS1 DataBar (the stacked omnidirectional version) on loose produce stickers throughout its divisions.

However, only 4% of the produce DataBars were being scanned, because for many items Kroger did not have a global trade item number (GTIN) in its POS file that corresponded to the DataBar. Many produce suppliers, complained Menz, were lax about providing Kroger with GTIN information.

At about that time, Kroger sent a letter to its produce suppliers requesting that they use the DataBar on their produce stickers along with the price look-up (PLU) code by Jan. 1, 2011, said Ed Treacy, vice president of supply chain efficiencies, Produce Marketing Association. The letter also asked suppliers to send the corresponding GTIN information to the PMA's GTIN database by that date, he said. Retailers are able to access the database online at any time, facilitating the transfer of GTIN data. (Kroger did not respond to a request for comment.)

About 100 produce suppliers have registered to use the PMA database (which is free to PMA members and costs non-members a one-time $500 fee). Of those, 70 have entered GTIN and PLU data into it — most of them since the Kroger letter went out, said Treacy. “We saw a lot of activity in the third and fourth quarters.”

When more large retailers make similar requests of their produce suppliers, Treacy expects to have 95% of suppliers providing GTIN data to the database and applying DataBars to their loose produce stickers. Other major retailers known to be scanning DataBars are Wal-Mart Stores and Loblaw Cos., but overall retailers are in the “early stages” of scanning produce DataBars, said Steve Arens, director of industry development for GS1 US, Lawrenceville, N.J., which oversees U.S. bar code applications.

Unlike the coupon, the produce sticker is not slated to use only DataBars anytime soon. “The PLU will be there as well for a long time,” said Arens. “Some retailers see the benefits of the DataBar but some are happy with the PLU.” Many retailers enabling their systems for the DataBar on coupons are also doing so for the produce DataBar.

Scanning the DataBar on loose produce eliminates the need for cashiers (or shoppers at the self-checkout) to key-enter the PLU number. The accuracy gained helps to reduce the shrink that occurs when organic or exotic produce is not identified correctly. Menz reported at U Connect that Kroger has reduced organic shrink through DataBar scanning and improved checkout productivity slightly.

A growing number of produce suppliers have started applying DataBars to produce stickers over the past few years. “There's been tremendous progress over the last year,” said Arens. One major produce label provider told GS1 US that nearly all of its loose produce stickers now include the DataBar, he said. Growers and packers using the DataBar also realize they need to communicate the GTIN to retailers and wholesalers, he added.

On the retail side, GS1 US is hearing that younger cashiers prefer scanning the DataBar on produce rather than looking up or memorizing PLUs. At the self-checkout lanes, consumers are also opting to scan the DataBar. “They scan everything else,” noted Arens.

Other fresh categories are moving toward adoption of the DataBar. Last June, the meat and poultry industry issued guidelines recommending the DataBar for consumer products. In March, the seafood industry is expected to publish guidelines also recommending the use of the DataBar. “We'll see major promotional and educational activity for the DataBar on fresh products in 2011 and 2012,” said Arens, adding that retailers will need to adjust scales and printers in fresh departments. GS1 US has cited 2014 as the year when retailers should be prepared to scan DataBars on a wide range of fresh and non-perishable products.

The DataBar on meat and poultry products will contain information like lot numbers that will facilitate recalls and traceback efforts, noted Alan Williams, vice president of application development for Ahold USA, Landover, Md., and co-chair of the Joint Industry Coupon Committee.