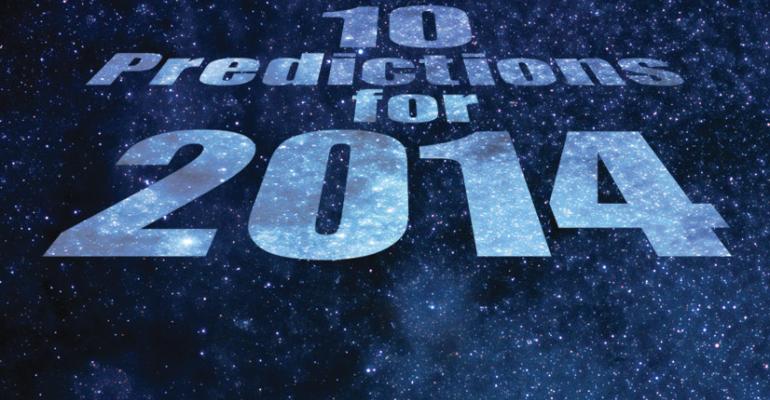 Online grocery retailing will increase as a percentage of sales in 2014 — no surprise to many, but Bill Bishop, chief architect of Brick Meets Click, provides some insights about just how that growth might occur in one of SN’s 10 Predictions for 2014 on the following pages.

Other prognosticators weighed in on such topics as sales growth at traditional supermarkets vs. Wal-Mart, a new approach to multicultural marketing, and expansion of small-format food stores.

“Both retailers and suppliers have been dancing around this issue of how ethnically diverse the U.S. population is becoming,” said John Rand, senior vice president, Kantar Retail, in a prediction about multicultural marketing. “This is not about marketing to a narrow-casted group inside a particular neighborhood — it’s about marketing to a group of people who have adopted that culture as their own.”

Consumers are also ready to move beyond “functional foods” to foods that are inherently nutritious, said Melissa Abbott, director of culinary insights for The Hartman Group.

“That’s not what consumers are interested in,” she said about foods with added calcium, omega-3s or other nutrients. “They are looking to their snacks to provide much more of an [inherently] nutritious profile.”

A similar focus on health will be evidenced in another prediction for 2014 — that more hospitals will reach out to supermarket dietitians to provide services to their patients after they leave the hospital.

“Historically, dietitians have reached out to hospitals to say, ‘These are all the services we offer in our store, take advantage of them,’ but what’s happening now is it’s the other way around,” explained Annette Maggi, president of nutrition consulting firm Annette Maggi & Associates, and executive director of the Retail Dietitians Business Alliance.

Another prediction for 2014 is that more supermarket retailers will take a page from Eataly and offer a “food hall” experience, complete with mini or pop-up shops to enhance their foodservice and local offerings.

“It’s an easy way to do … local, artisan products that may be available in small quantities,” said Brian Darr, managing director of Datassential, describing a pop-up offering of local products at a New York Whole Foods.