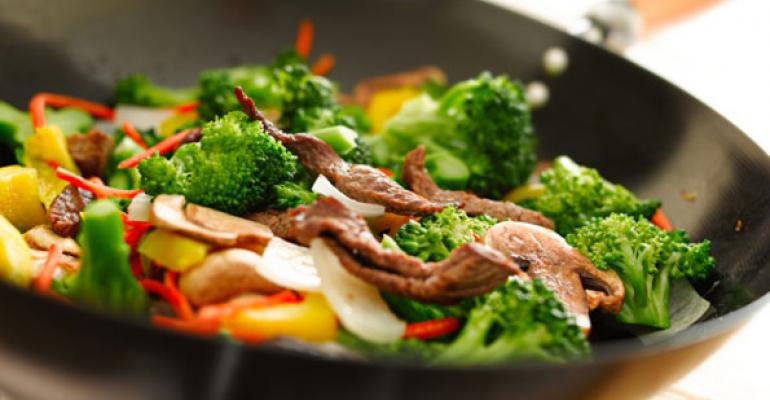 Consumers are turning away from bland beef preparations, instead embracing more flavors and ethnic foods at greater levels, according to recent research from the Beef Checkoff Program.

Ethnic food categories experienced gains in appreciation by shoppers since the last time the Beef Checkoff polled consumers in 2005.

“Although American and local food is still the most popular, in 2005 8% reported liking Vietnamese food, that increased 21% this time around. Japanese went from 26% to 39%, so I think that speaks to our palates getting more and more adventurous,” Dave Zino, executive chef for the Beef Checkoff, told SN.

Pink steak is also in. Fifty-one percent of the consumers polled online said they preferred their steaks medium or medium rare.

“I expected the various ethnic foods to increase, but the fact that consumers are enjoying beef in that medium rare, medium range that we recommend for steaks that pleased me as well,” Zino said, also noting retailers could work with butchers and meat managers to educate shoppers on proper beef preparations.

Consumers are taking their ethnic food cravings into their own hands, cooking ethnic dishes at home.

For instance, 36% of 794 polled consumers who prepare Mexican dishes with beef do so from scratch, and 28% make these dishes from semi-prepared ingredients, the Beef Checkoff found.

Related story: Culture Shop: The Meat of the Matter

Consumers have still been eating out less than in the past, with only 15% of consumers reporting eating out five or more times per week for lunch or dinner, versus 22% in 2005. More of the polled consumers have shifted to moderate restaurant-goers since 2005.

Shoppers are instead bringing the restaurants to their home kitchens through recipes. In the “Recipes Are Cooking” report released last month, the NPD Group found 42% of female homemakers use a recipe at least once a week, up from 37% in 2005.

NPD says this growth is driven by younger shoppers — half of Millennials and 45% of Gen Xers report using recipes once a week.

“The additional ingredients they require to make these recipes often result in larger shopping baskets. This also means that they’re probably planning out their purchases further in advance, so it’s much more important to make sure you get on their shopping lists,” he said, in a video discussing the report.

The top meal-planning challenges for consumers are getting new ideas for main meals (55%) and finding meals that are quick to make (52%), according to NPD.

As for how retailers can help consumers: “Retailers should think about ways to make recipes that will taste great and take little time as well as little preparation,” Seifer told SN.

“They should also make suggestions on how to flavor their recipes since many cookers indicated they often make their own modifications. It makes them feel as though they have made the recipe their own.”

Related story: Culture Shop: The Meat of the Matter

The Beef Checkoff’s Zino finds cross-merchandising to be helpful to shoppers — who are not only interested in ethnic cuisines, but also have increased interested in spices, sauces and ingredients accompanying beef such as onion, garlic, sliced cheeses, barbecue sauce and mushroom sauce, according to the Beef Checkoff’s research.

“I’m a big proponent of cross-pollination, so to speak. I just think it makes more sense to give people all the tools in one spot,” Zino said, who added that while consumers are more adventurous in their cooking they continue to be time-starved.