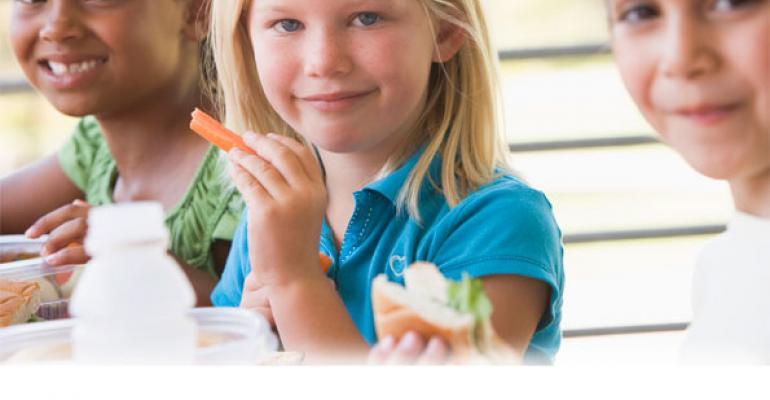 <p> &ldquo;Our customers look to us to provide meal solutions, and finding nutritious meals for their children is no exception,&quot; says Maria Brous of Publix.</p>
News>Retail & Financial

There’s no shortage of healthy kids’ snacks in supermarkets today, but prepared meals in deli and foodservice departments are another story.

Some retailers have swapped out unwholesome edibles for better-for-you bites, such as a deli program at Lakeland, Fla.-based Publix Super Markets.

“In our stores, our deli departments offer lighter options, such as salads — both greens and fruit. Several years back we introduced our line of deli kids’ meals with healthier components, like juices, pita bread, fruits and veggies,” Maria Brous, spokesperson for Publix, told SN. “Our Publix Deli Kid’s Meals are well balanced, priced at $3.99 and come in five varieties.”

One of the varieties includes oven-roasted turkey on a Hawaiian roll, apple slices and grapes, Craisins and Horizon 2% white organic milk. Another consists of peanut butter rolls made with creamy peanut butter on a honey wheat roll, plus string cheese, applesauce, mini carrots and a fruit drink.

“Our customers look to us to provide meal solutions, and finding nutritious meals for their children is no exception,” said Brous. “Whether as a solution to back-to-school meal planning or for families on the go, our Publix Deli Kid’s Meals are the perfect solution to the question of ‘What’s for lunch or dinner?’”

Others retailers allow shoppers to customize the contents of their take-home containers.

Grand Rapids, Mich.-based Meijer recently added choose-your-own-toppings fruit and yogurt parfaits to its produce departments as a healthful breakfast option or an on-the-go snack for adults or kids. The popularity of McDonald’s yogurt parfaits prompted Meijer to start selling these, said Shari Steinbach, healthy living manager for the Midwest chain.

Healthful menu makeovers in the restaurant industry are indeed the inspiration for such switches in supermarkets, said Bill Bishop, president, Willard Bishop, Barrington, Ill. However, he believes that not enough retailers have been moved to make changes thus far.

“Restaurants may have been the first to take action, but any retailers that jump on this now will have a competitive advantage when shoppers become accustomed to buying their healthy kids’ meals at their stores,” he said. “This isn’t a fad. It’s a movement that more supermarkets should be addressing.”

Jenny Anderson, director of research and consulting at Chicago-based Technomic, sees a growing presence for children’s meals in supermarkets. She cited Fresh & Easy Neighborhood Market’s Goodness line, Deli Kid’s Meals at Publix and “Kids Kuisine” line at Roche Bros. as examples of retailers setting the bar high for other supermarkets.

Anderson pointed out that these retailers are offering diverse options to accommodate different preferences, while still focusing on nutrition. These meals “appeal to the young members of the household who often hold valuable veto votes and still target parents with the more premium and adventurous dishes increasingly common in delis,” she said. 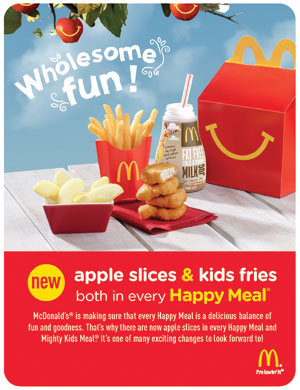 Retailers are getting cues from restaurants on how to cater to child customers. McDonald’s was one of the first to adjust its children’s menus to include more nutritional options. The fast-food giant reduced the size of its fries, added sliced apples and reduced the sodium by 10% in many of its chicken items, including Chicken McNuggets, a Happy Meal favorite.

According to a McDonald’s spokesperson, by 2020, McDonald’s will “reduce added sugars, saturated fat and calories through varied portion sizes, reformulations and innovations. McDonald’s will also reduce sodium an average of 15% overall across its national menu of food choices by 2015.”

When McDonald’s made these moves, other quick-service restaurants followed suit. Irvine, Texas-based Chick-fil-A, for instance, added grilled chicken nuggets to its list of offerings.

Darden Restaurants, the world’s largest full-service restaurant company, whose brands include Red Lobster, Olive Garden, LongHorn Steakhouse and Bahama Breeze, also altered its options. To date, the company has made one of the most comprehensive health and wellness commitments in the restaurant industry.

“First Lady [Michelle Obama] continues to lead the growing national efforts to make healthy food options more available and accessible, and we’re pleased to collaborate with her and the Partnership for a Healthier America on this commitment,” Drew Madsen, president and chief operating officer at Darden Restaurants, stated shortly after the new meal programs were implemented in fall of 2011.

Fruits or vegetables are now default side dish options for children’s meals. An 8-ounce serving of 1% milk is the default beverage.

“It always takes awhile for things like this to translate into commercial execution, especially in the supermarket industry,” said Bishop. “Retailers had better take a cue from the First Lady and get moving or they will run the risk of missing valuable shares of the market to competitors who address this increasing demand first.”

In addition to restaurant-style parfaits, Meijer stocks a large selection of prepackaged, frozen and shelf stable   options for kids. While the retailer does not currently carry healthy prepared meals for children, in-house nutritionists strive to teach moms, dads and kids how to prepare nutritious snacks and meals themselves, said Steinbach, who noted Meijer offers workshops and recipes and educates children and adults on its NuVal system.

“We even have scavenger hunts to inspire kids to look for foods with high NuVal scores and we encourage parents to have their kids help find foods with high scores during their regular shopping trips.”

On Aug. 11, all 197 Meijer stores will host in-store demonstrations centered on back-to-school meal preparation. Employees will showcase a variety of recipes made with mostly proteins and produce.

“Its H-E-Buddy mascot is in virtually every circular and even appears on healthy food packaging in the chain’s stores,” said Wisner, who said the mascot is well known outside of the store.

The icon, whose name is short for “Health-E Buddy,” has been parlayed into a  kids’ product private label line with strict guidelines. The guidelines include: no empty calories, no trans fats, no high fructose corn syrup, sodium limits, no partially hydrogenated oils, and more than 10% of daily value of vitamins, minerals, fiber or protein.

There are still numerous opportunities for supermarkets to expand their healthy offerings for kids, according Steinbach.

“The childhood obesity epidemic has tripled in the past 10 years and as a result, we continually have shoppers asking for healthier options for their kids.

“People are starting to understand that they can truly change the health of their kids through wiser food choices. We see it as our job as retailers, not only to supply the products that help battle obesity in children, but to also educate our shoppers about all the ways they can use them to their betterment,” Steinbach said.