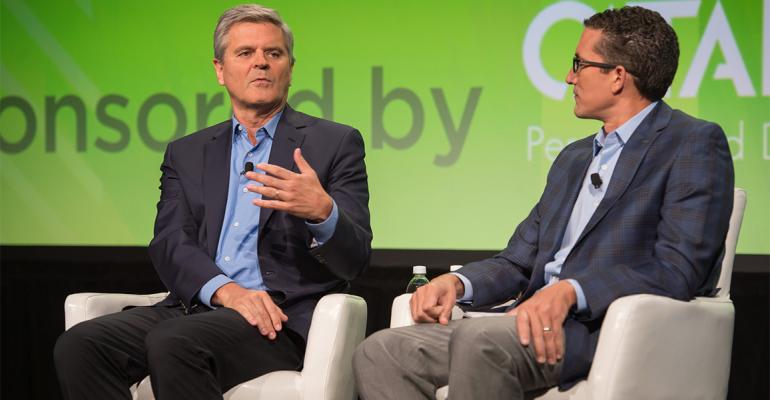 AOL founder urges industry to 'lean into the future'

Be optimistic about the future. Network. Play offense.

Those were three pieces of advice from AOL co-founder Steve Case, speaking at a general session at FMI Connect in Chicago, Tuesday.

Case argued that that mindset — optimistic, open and offensive — will be critical at the dawn of what he termed a “third wave”of the Internet revolution,  a kind of post-Internet period during which “real world” sectors like retail and food will be transformed by technology. The first wave, he said, was about companies like AOL laying the foundation for the Internet between 1985 and 2000; a second wave arrived with the building of applications like Facebook upon the Internet.

“One hundred years ago, electricity was a hot industry, now we take it for granted,” Case remarked. “Nobody says, ‘That’s an electricity-enabled company’ the way they say ‘That’s an Internet related company.’ At some point, the hyphenated Internet will just go away. E-mail will become just mail. E-commerce will be commerce, because it will be so integrated.”

Preparing for this change will require companies to “lean into the future,” Case said, noting that even innovative companies can underestimate the pace of change and make the mistake of hanging onto legacy ways of doing business, such as Kodak.

“You have to get your timing right, but it’s better to err on the side of leaning into the future and assuming things will happen faster as opposed to presuming there are ways to control or limit these trends,” he said.

Case also urged companies to create a network of businesses that can help one another.

“The third wave will be defined by partners,” he continued. “The companies that understand that and figure out how to do a more open, inclusive approach to innovation and ideas are going to be the big winners. The ones focused on managing what’s theirs could be left out.”

Companies should also be careful not to put too much energy on any single project, arguing that companies like Google have been successful in part by supporting projects on multiple fronts.

“At the end of the day the problem a lot of big companies have is that they don’t take enough shots on goal,” Case said. “Usually there is a correlation between the shots you take in hockey and whether you win the game.”

The session was hosted by Catalina U.S. President Todd Morris.

“When Amazon got started the general view was it would never take off because most people wouldn’t be comfortable entering their credit card into that Internet thing,” Case said in response to a question. ”What happened was the people did get comfortable. And then they said, ‘You know what? Could you please store my credit card number? And can you track what I’m buying so you can send me recommendations?’ If you said that at a conference 30 years ago they’d have said you were crazy. But that’s what happened.”