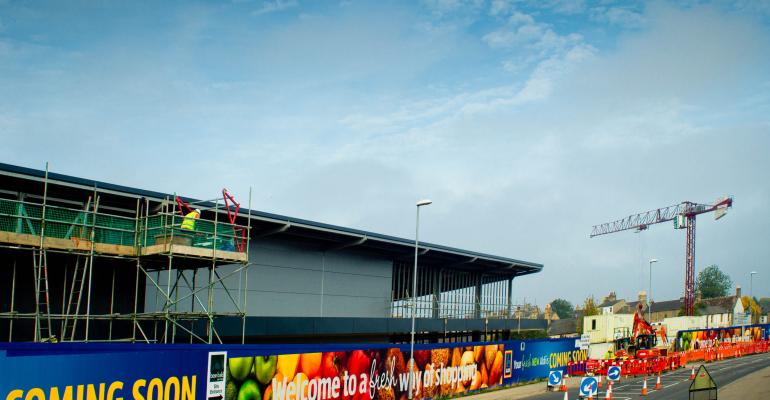 Assembling a communicative team of experts is essential to constructing an energy-efficient supermarket.

Building a supermarket from the ground up is costly. And in an industry where margins are razor thin, a store owner may be tempted to shave construction and equipment costs to reduce that start-up investment.

But since supermarkets are power-hungry facilities that generate massive utility bills, experts advise against corner cutting. By choosing energy-efficient equipment and system controls during the construction phase, they say owners will generate long-term savings through lower monthly bills while gaining potential government incentives and rebates.

Creating a supermarket building from scratch requires a multi-trade team of experts to design and build it. Getting everybody on the same page at the outset is crucial, says Rick Ferguson, co-owner and chief engineer at R3 Retail Development.

“Step 1 for the owner is putting the right team of people together for the work, and getting complete buy-in,” says Ferguson, whose Camas, Wash. consultancy assists retailers with store designs and energy-performance improvements.

“If you don’t have constant interaction among members of that team, they end up working in a vacuum,” adds R3 Co-owner and Operations Chief Suzanne Ferguson. “Having that communication — and a lot of it — before construction starts is so important.”

When a major goal is energy efficiency, every trade will need to have its say. The architect’s building plan, for example, must consider the structure’s orientation to the sun and prevailing winds to choose the ideal materials for its roof, windows and exterior walls.

Armed with such information, an energy-management consultant would take those plans a step further by advising how best to insulate the building from heat and cold, or whether to add daylighting features that allow natural light through the roof.

“Building codes are such now that almost no one will let you proceed without making the structure energy efficient,” Rick Ferguson says. When choosing materials, “it’s smart to look for incentives and rebates while you’re finalizing the design, and to save the owner money.” (See accompanying sidebar.)

Pay now and save later

It’s common for building owners to choose less expensive equipment that isn’t ideally suited to their business. By investing a bit extra in equipment purpose-built for supermarket use, the Fergusons say, optimal performance is easier to achieve, and lower operating costs will be realized.

“It’s easy to install an ordinary air conditioning package on the roof and call it good,” Rick Ferguson says. “But lots of times the owner or the HVAC engineer isn’t considering the use of the building.”

Ordinary AC packages that can’t manage a supermarket’s uniquely humid microclimate won’t succeed in cooling and drying the space fully. It also will work overtime trying to compensate for its shortfalls.

“A client we worked with had a 200,000-square-foot building, and nearly all of the space was refrigerated,” Rick Ferguson says. When he learned the client sought a lower-priced refrigeration package, he convinced him to spend more “on more sophisticated equipment that could save him $200,000 to $400,000 a year in electrical costs. He wasn’t even aware that such an option was out there.”

R3 Retail Development also advises store owners to choose modern equipment that can be controlled by a computerized energy management system (EMS). Such systems monitor and manage multiple data points such as temperature, humidity and mechanical performance on a wide range of equipment throughout the building. Optimizing an EMS for a grocery store requires cooperation with every engineer on the owner’s building team.

“We develop the EMS design based in tandem with other building and system design work to ensure the EMS is fully integrated and able to perform at maximum efficiency,” says Suzanne Ferguson.

A primary goal for R3 is to help their clients think decades beyond the store opening to make the best structural decisions, and equipment and systems choices for their stores. One notable design oversight they’ve seen is centered on heat pumps placed in a building’s ceiling. Servicing them required lifts, ladders and lost revenue from closing the store for customer safety.

“When you’re thinking and designing, you have to ask yourself constantly, ‘What do I need to do to make this run and also maintain it for 20 years?’” Rick Ferguson says. “We help them put a lot of thought into the life cycle costs of everything.

“Ask if your building can be more efficient, save money and treat the planet better while making that business more sustainable,” he says. “Our job is to offer up those suggestions.”