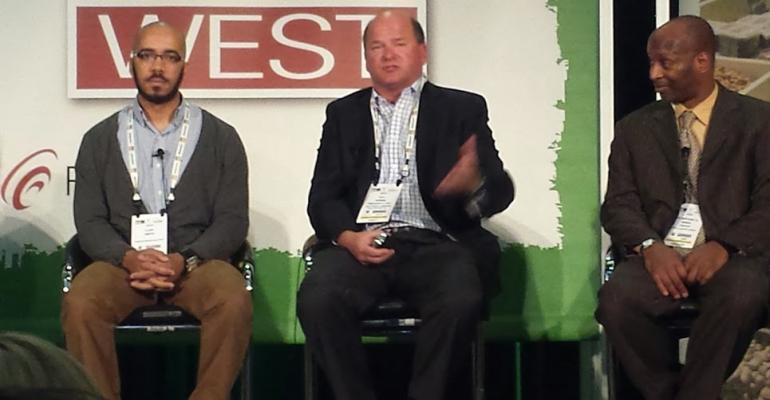 A poet, an inner-city gardener, a researcher, a minister, a conventional grocer and a former NBA star were among the guests of Whole Foods Market co-CEO Walter Robb, who called on their testimony to help urge the natural foods industry to do more to provide disadvantaged communities with better access to healthy foods during a panel discussion during Natural Products Expo West in Anaheim on Friday.

Robb, who also detailed Whole Foods’ contribution to the movement by way of its recent opening in Detroit, challenged attendees to call on the entreprenureal spirit of the natural and organic industry to make their own efforts to improve access to food.

“We in this industry have enjoyed so much success and tremendous prosperity,” Robb said. “It’s also an industry that’s been about very big things, and willing to look down the road and take on the next challenge, and do things that no one else has been willing to do. I submit this is one of those times.”

In recounting the three-year effort to open a food store in Detroit, Robb noted that the retailer had to first overcome a skeptical public through dialogue with a variety of constituencies including a citywide community garden program championed by one of the panel guests, Ashley Atchison of Keep Growing Detroit and the support of John Salley, the popular former Detroit Pistons star who has become a vegan activist and food spokesman.

“Detroit has seen a lot of white knights come through town,” Robb said. “In our first meetings I palpably felt a lack of trust and almost anger at us, and I realized, we almost had to start at the most basic level.”

Clint Smith, a public school teacher in inner city Washington and a poet, noted a similar institutional skepticism as he described how his students have taken to using social-media programs like Twitter and Instagram to call attention to things like the quality of their school lunches. Smith also delivered a powerful spoken-word poem inspired by the inequity of access to food that drew a standing ovation.

Pat Burns, founder of The Fresh Grocer, the Philadelphia-based retailer known today for helping to pioneer movement among conventional retailers to seek opportunities in inner cities, called on attendees to work to provide more affordable healthy foods. Burns is center in the picture above, alongside poet and educator Clint Smith (left) and Michael Minor (right), a pastor at Oak Hill Baptist Church in Mississippi.