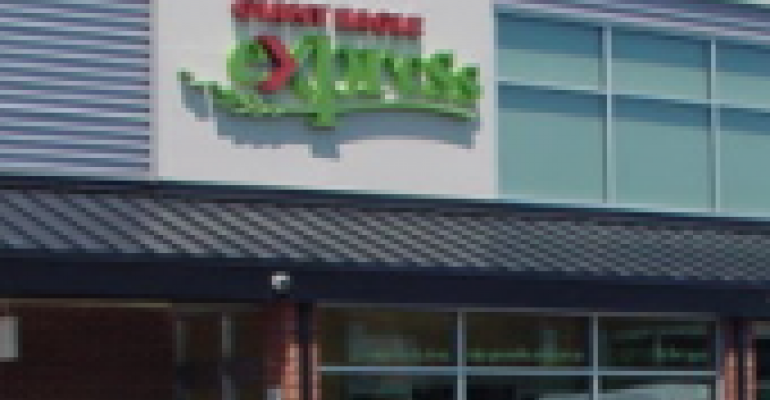 As with many new ventures, small-format stores have proven to be a tough sell for mainstream retailers. Bashas’ recently closed down Ike’s Farmers Market. Supervalu shuttered Sunflower Market, its minimalist-fresh format, last year. Even Publix’s Greenwise locations have been slow growing.

The format can clearly work, as Trader Joe’s, Aldi and others have shown. So what’s the right approach for the big guys?

Giant Eagle thinks it has the answer. Last week the Pittsburgh-based retailer announced it had remodeled its Giant Eagle Express store, which opened in May 2007, with a renewed emphasis on fresh meals and meal solutions. There are now more than 50 grab-and-go menu items to choose from for breakfast, lunch and dinner, including epicurean eye-catchers like sushi and coconut crusted tilapia. There are also ready-to-heat meals, for those who don’t have time to hang around the 40-seat café area, as well as plenty of produce and other grocery items to fill out the 13,500 square-foot space.

“We had nearly two years to watch and analyze customer needs, reactions and purchasing behavior,” said Rob Borella, marketing director for Giant Eagle, in a statement.

You live, you learn, and what retailers like Giant Eagle are learning is that a small-format store shouldn’t just be a smaller version of the traditional supermarket. It should have its own niche — in this case a “fresh” niche, aimed at serving the quick meals and ingredients that consumers need in between weekly grocery trips.

Opening along these same lines in downtown St. Louis this summer will be Culinaria, a 21,000 square-foot venture from Schnucks. An urban market calls for a small format, and Schnucks hopes to drive the opportunity home with plenty of fresh meal offerings and the city’s only downtown pharmacy.

Consumers still want the traditional stores and supercenters to supply the bulk of their shopping needs. But there’s no reason small-format stores can’t become an important piece of mainstream retailer’s portfolio — a way to fulfill that need for something quick, fresh, and delicious.