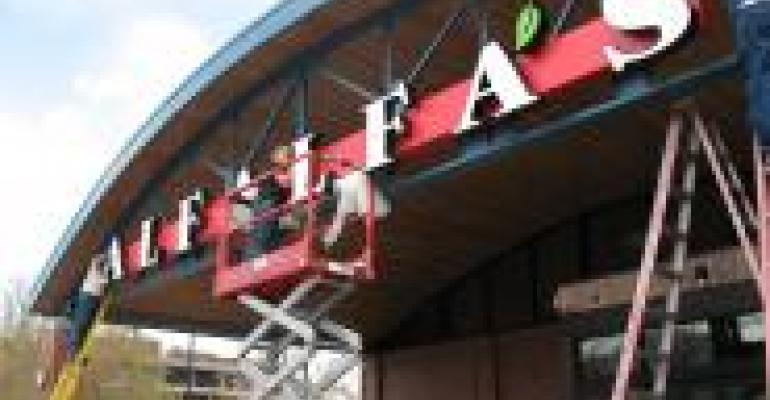 The Return of Alfalfa's

We last spoke with Mark Retzloff, one of the guys behind the original Alfalfa’s Market in Boulder, Colo., in June 2010, after it was announced he and some others had acquired the rights to the iconic retail name and were embarking on a plan to re-open on the site of the original store, at the intersection of Broadway and Arapahoe.

“There’s a high level of anticipation for this opening,” said Retzloff, which is something of an understatement, given the response to our last post and the publicity surrounding the news... And to think, all for one store!

So, what’s new? The sales floor has grown by 3,800 square feet, to 20,000 square feet. It will be the only food store in the city of Boulder to sell spirits, wine and beer; there is an in-house smoker for bacon, as well as a wood-fired pizza oven; a seating area has been added; an expanded bulk section includes stainless steel vessels for the 23 olive oils and vinegars carried; the cut-to-order cheese station is four times the size of the original; and a special area has been reserved for local foods.

Luckily for fans of the original store, architects restored the general layout and flow of the aisles, and the demo booth/kiosk has been put back in its rightful place of honor.

Perhaps most interesting, however, is the enthusiasm shown by employees of the original operation who flocked back to apply for positions in the new store.

“For every position we had three or four people who applied,” Retzloff said of the approximately 200 full- and part-time jobs that were created.

By his reckoning, about seven management-level folks have returned, including Paul Gingerich, who we last spoke to when he headed up meat and seafood at Wild Oats.

Just as important, however, are the half-dozen or so children of management who have joined the Alfalfa’s team, including Retzloff’s own kids.

“We have probably about eight of them, and it’s interesting because they grew up in the original store,” he notes. “It’s also important because it says a lot about the sense of community that Alfalfa’s continues to encourage.”

The next generation working in the revitalized store carries tremendous benefits, since friends, schoolmates and family will now get to know about Alfalfa’s. Leaving nothing to chance, the store has a social media coordinator, hired in September, who will oversee the retailer’s tech outreach.

“Living in this community, being local, we know the things that resonate with people and what they really like about Boulder, and so we’re going to incorporate those things into what we’re doing in the new store,” Retzloff told us.

Alfalfa’s might cherish its history, but it is not mired in the past.